Netflix Review: My Octopus Teacher is No Less Than a Spiritual Experience 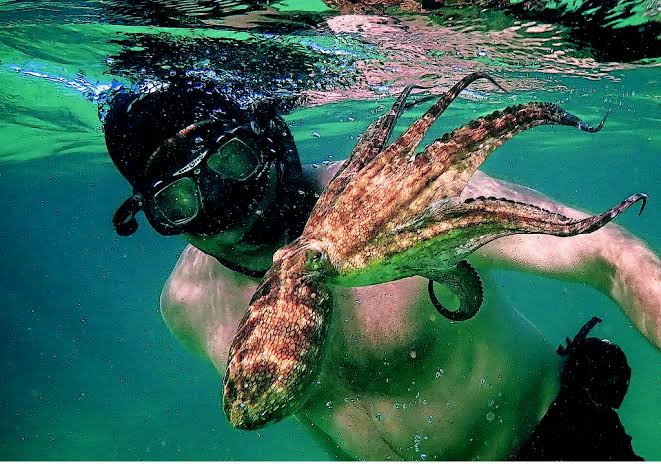 It really wouldn’t be an exaggeration to call ‘My Octopus Teacher’ a spiritual experience.  The premise of ‘My Octopus Teacher’ feels almost fictional or mythical, unfolding on a planet light-years away. Such is the complexity and variety of the marine life portrayed in the film. Directed by Pippa Ehrlich and starring Craig Foster, the documentary is striking in its visuals and more so in its concept.

At the very beginning of the documentary,  Foster prophesizes, “A lot of people say that an octopus is like an alien. But the strange thing is that as you get closer to them, you realize that we’re very similar in a lot of ways.” This wonderfully sets the tone for what viewers are about to experience and behold. In ‘My Octopus Teacher’, Craig Foster forges an unconventional friendship with an octopus named Superstar. The friendship was born out of Foster’s need to reconcile with the sea and its life, after a particularly bad bout of depression and exhaustion. Foster begins to undertake daily excursions to the sea, meeting and becoming captivated with Superstar on one such trip.  Foster is resplendent in his role as narrator and often in open awe of the creature he bonds with. And this despite Foster being a long-time natural history filmmaker, who has seen and done all there is to see and do, including swimming with the likes of great white sharks and bravely venturing into the lair of a giant crocodile.

Foster treats his newfound friendship with honesty and empathy, letting Superstar take the lead. In stark contrast to the usual way marine life is studied and interacted with, Foster’s connection with Superstar is formed at her own behest. Foster often has no qualms being a fish out of water in her environment, allowing her to be his tour guide of the sea and her own private universe. He approaches the octopus’ life like a mystery, but lets Superstar do the unraveling. Foster even forsakes his wetsuit to get up, close and personal with his subject.

Foster’s soulful connection with the octopus has magic healing powers, so to speak.  Foster finds himself jolted out of his depressive episodes, with a renewed sense of purpose and an even greater sense of curiosity. Foster beautifully depicts to us the invisible thread that connects man and wild and just how deep that connection runs, once explored.

The documentary’s teachings are reminiscent of philosopher Martin Buber’s. Buber was of the view that man often lets slip the chance to cultivate meaningful spiritual relationships between himself and nature. Buber defined this as ‘I and Thou’ moments, wherein we humans recognize other living entities and are able to perceive them observing us. These interactions end up giving us a profound sense of self. However, according to Buber, what often ends up happening is the opposite, in the form of ‘I and It’ moments. Here, human beings often perceive flora and fauna as objects rather than real, living beings and treat them as such. Foster and Ehrlich demonstrate to us the impact that these ‘I and Thou’ interactions can have on each other and they do it in great style. To that end, the movie is a great advocate for the conservationist philosophy that Foster is more than a fan of.

While Foster brings life to the documentary, it is Pippa Ehrlich’s direction that truly makes the documentary sing. Through Ehrlich’s lens, we are witness to miracles of nature: the octopus gently shoots a tentacle around Foster’s finger as if formally welcoming him to her world with a single-tentacled handshake; at times, it diligently follows Foster, with no inkling of fear or inhibitions; it plays hide and seek with the camera, often knocking it over playfully. By this point, one can’t help but form their very own attachment to the mollusk. Foster, however, ensures we know that this attachment will be short-lived, given the fact that octopuses have a drastically short life-span of just a year. This may add to the film a bitter-sweet flavor, but it is a necessary one.

Not to be outshined, the cinematography of ‘My Octopus Teacher’ is a revelation in itself. It makes diving in frigid temperatures look appealing and, believe it or not, almost inviting.  The cinematography thrusts us into the soul of aquatic life, as if taking us along for the ride. The marine flora and fauna, some of them still unexplored and unknown to man, appears beyond imagination.