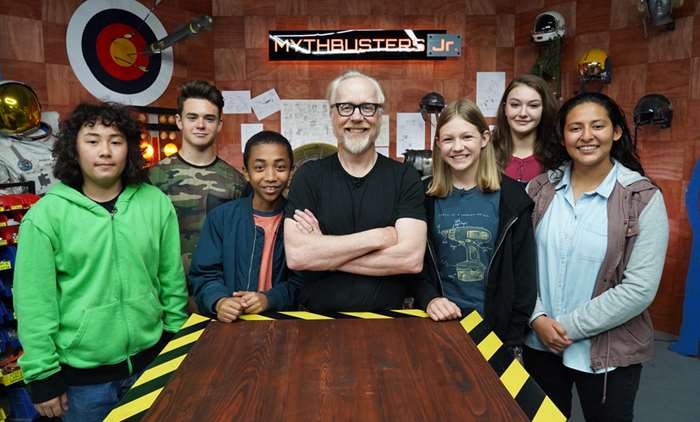 Have you ever wondered if a parachute made out of water-proof duct tape would actually work? Or is that just a myth? Join Adam Savage and his team of young brilliant minded scientists who decode some of the most popular science myths on Mythbusters Jr. You find out through the series which of such proposed theories is actually a fact and which among them are fiction.

The popular co-host of the original Mythbusters serves as the mentor to a group of children in this spin-off titled Mythbusters Jr. The 10 episode series has six young geniuses who are here to show us how much they know about STEAM (Science, Technology, Engineering, Arts, and Maths). The show is produced by the Australian production house, Beyond Television Productions. It first aired on January 2, 2019, on the Science Network. Here’s everything we know about its upcoming season.

Mythbusters Jr. Cast: Who is in it?

Alongside Adam Savage, the host of the series, we have six highly brilliant kids. From robotics skills to patents for inventions, these kids have a really amazing track record – Valerie Castillio (at 15, he is a robotics expert skilled at CAD and 3D printing), Rachel Pizzalato (14, who is known to be remodelling houses since a very young age and has several accolades to boast for including a number of Regional and National Science Competitions, Akron Global Polymer Academy Champion in 2018, the AIAA National Essay Champion of 2018, among others), Elijah Horland (12, a builder of computers who taught himself programming at the age of 9), Cannan Huey (12, an expert at coding and motion physics on his way to being an astronaut), Jesse Lawless (15, a car aficionado who accomplished the task of building a chopper at a young age), and Allie Webber (13, one of the 10 young scientists in the country as per 3M).

Tamara Robertson, a MythBusters: The Search finalist, serves as the builder in the show. Her vast expertise in the field of design and engineering makes her a perfect addition to the cast. Jon Marcu also features on the cast as a builder.

Adam Savage explained his role on the series. He said, “the idea of (Mythbusters Jr.), it’s not a show about teaching these guys how to do stuff. It’s not a kids’ shows. These are the new MythBusters. And I’m their camp counsellor, and their adviser, and, sometimes, their test subject. But the moment I heard that phrase — ‘MythBusters Jr’ — I saw all that. I realized how much potential there is.”

Mythbusters Jr. Plot: What is it about?

With each episode of Mythbusters Jr., we see Adam Savage and the kids put to test a variety of myths by conducting experiments and creating models to determine if they actually work. For example, in one episode they investigate if a single spark and freshener can lead to an explosive calamity in the closed chambers of a car. In another, the team proceeds to find out how whether the amount of water a wet dog can shake based on an urban legend is actually true. The creator of Breaking Bad, Vince Gilligan, shows up in one episode and challenges the team to an experiment involving a giant magnet. We also take a look at some Hollywood-inspired myths to find out if regular furniture can actually help defend someone in blocking a villain trying to break in through a door.

Seeing children as young as 12 know so much about science is both inspiring and interesting. This is not a kid’s show; it is for everyone who likes a good experiment. Science is a fascinating subject and the knowledge about how things work and why they do so is what it seeks to answer. A scientist is nothing short of a conjurer on stage. The way a magician cuts his beautiful assistant into half or pulls a rabbit out of his hat – it all comes down to a science.

Mythbusters Jr. is not just about conduction whacky experiments that are entertaining but it is also educating its veiwers. With episodes like Battery Blast, Deep Space Hollywood, and Shredder Explosion, this new version of Mythbusters blows your mind away. It answers whether an arrow flies straight or if a garbage truck can start a fire when its batteries are tossed. Other episodes take a look at an office paper shredder to find out if it can result in a catastrophic explosion on spraying with canned air, and a fire extinguisher’s ability to work as a vacuum jetpack. We also find out why you can’t truly hear a scream in space.

Mythbusters Jr. Season 2 Release Date: When will it premiere?

The show made its way to the Science channel on January 2, 2019. As far as the next season goes, we don’t have an official announcement yet. Though considering the uniqueness of the show, we are hoping that it does get another season. Our best guess is that if the show does get renewed, Mythbusters Jr. season 2 can release sometime in January, 2020. We will update this section as soon as we hear more.

While we wait for the release date of season 2, check out the season 1 trailer to refresh your memories. The full season 1 is available on Science Network.