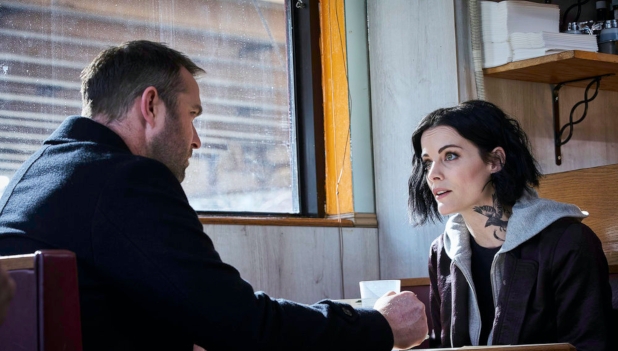 NBC’s drama ‘Blindspot‘ returns for a fifth and final season in 2020. ‘Blindspot,’ which was NBC’s Friday attraction, has recently been removed from the schedule for May sweeps. According to latest reports, the fourth season of the series will return to air the remaining two episodes before NBC starts rolling the fifth season. The last two episodes of season 4 will be aired on May 24 and May 31.

‘Blindspot’ stars Sullivan Stapleton, Jaimie Alexander, Rob Brown, Audrey Esparza, Ashley Johnson, and Ennis Esmer. The plot follows Jaimie Alexander’s character who crawls out naked out of a bag straight under the sky of sprawling Times Square. Every inch of her body is covered with tattoos. Later, she learns that the tattoos are codes and she works with the FBI to unearth some dangerous truths.

After four seasons, the plot thickens with more twists and turns. With all memories and past wiped off and carrying a map of secrets written in the language of tattoos on her body, the woman attracts unnecessary attention from all sides. She finds herself in the midst of a cobweb of secrets, conspiracy and deception.

‘Blindspot’ is one of the big breakout hits of NBC. The ratings hit an all-time high when it was rescheduled on Wednesdays for season 2. But the ratings fell after it was moved to Fridays at the start of Season 3. Created by Martin Gero, ‘Blindspot’ is executive produced by Greg Berlanti, Sarah Schechter for Warner Bros TV and Greg Berlanti Prods, along with Gero. The series garnered critical acclaim and two Emmy nominations in the Outstanding Stunt Coordination category in 2017 and 2018.

Earlier, NBC has ordered the comedy, ‘The Kenan Show’ and series like ‘Bluff City Law,’ ‘Council of Dads,’ ‘Sunnyside,’ and ‘Zoey’s Extraordinary Playlist, and ‘Law & Order: Hate Crimes.’ But the shows like ‘Abby’s,’ ‘A.P. Bio,’ ‘The Enemy Within,’ ‘This Is Us,’ and ‘The Village’ are still awaiting official renewal announcements.

Producer Dick Wolf’s ‘Law & Order: Special Victims Unit’ is renewed by NBC for a groundbreaking 21st season. ‘Trial & Error’ and ‘Midnight, Texas’ are both canceled after their second seasons, and I Feel Bad is cancelled after its first season. NBC plans to fill the gap after the slew of cancellations with rapid renewals. The other broadcast networks are also busy reshuffling their Fall slates before the presentations to advertisers.