One of the greatest changes that was brought in by Netflix and other streaming platforms is the wide range of foreign language shows and movies that they’ve made available on their websites. A few years ago, it was as difficult as deciphering a foreign language to watch a cult series from a non-English speaking region. Netflix has changed that and we now have an impressive lineup of foreign language shows. Like in movies and food, the French keeps their peculiar aesthetic temperament in their TV shows. With that said, here’s the list of really good French shows on Netflix that are available to stream right now: 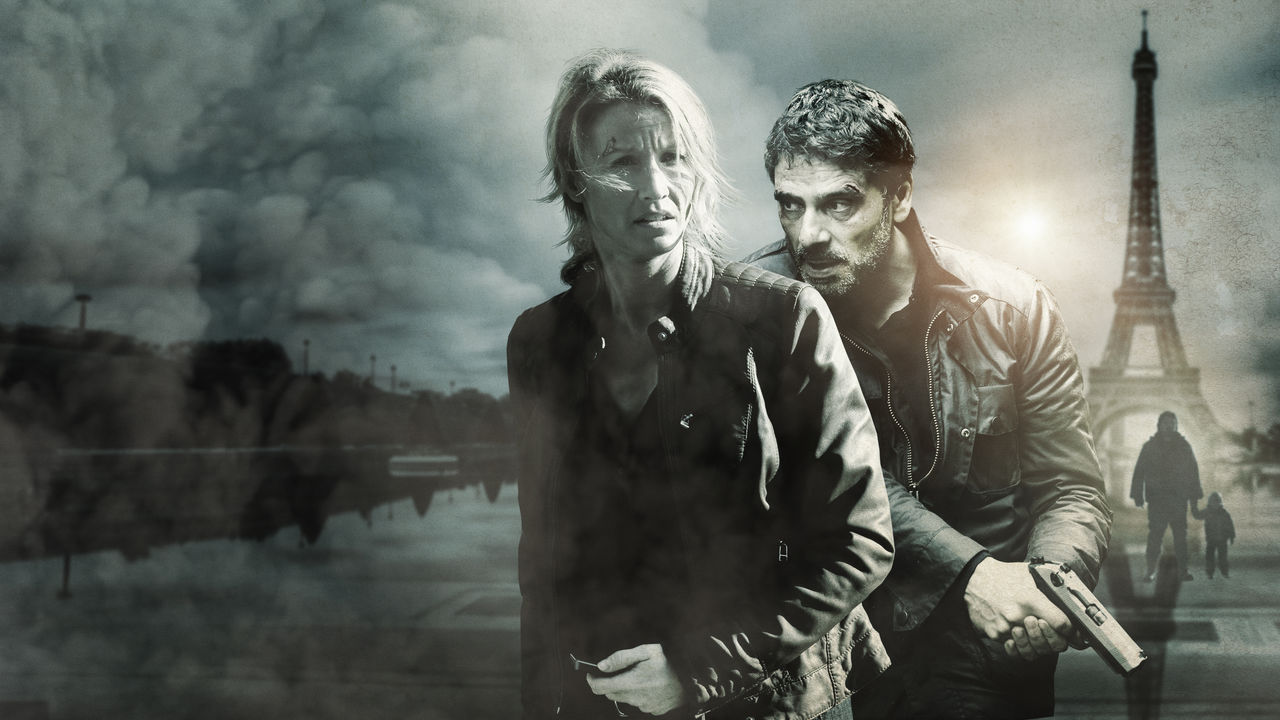 ‘No Second Chance’ aka ‘Une Chance de Trop’ is a revenge drama about a vengeful female doctor of death who takes things to her hands when the system fails. Dr. Alice Lambert wakes up after an assault on her family only to learn that her daughter is kidnapped. With the police putting her under the scanner, Alice decides to track down her daughter, but in vain. Two years after the kidnapping, she receives a cryptic message that revives Alice’s hope. At odds with the policemen who are in charge of the investigation, she embarks on a dangerous journey to find her missing daughter. As she inches close to the kidnappers and the truth behind her daughter’s disappearance, more secrets unearth. Created by Harlan Coben and Sydney Gallonde, ‘No Second Chance’ features Alexandra Lamy, Pascal Elbé and Lionel Abelanski in the lead roles. All six episodes of season 1 of the show are available for streaming on Netflix. 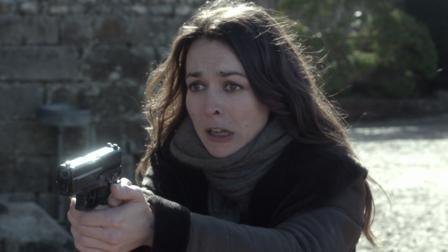 ‘Witnesses’ is a six-part miniseries set in the coastal French town of Le Tréport. The small town people are frightened when an anonymous grave-digger displays recently buried dead bodies in houses put out for sale. The curious case attracts the former chief-of-police, Paul Maisonneuve, who is recovering from a car accident. He teams up with Inspector Sandra Winckler to solve the mystery. The ex-cop has retired after the death of his wife and he has created so many enemies during his service. As the duo digs deep into the series of crimes, they find themselves at the center of a cobweb of conspiracy. Hervé Hadmar and Marc Herpoux created this thriller which features Marie Dompnier, Jan Hammenecker and Alexandre Carrière in the lead roles. The first two seasons of ‘Witnesses’ are available on Netflix for streaming. 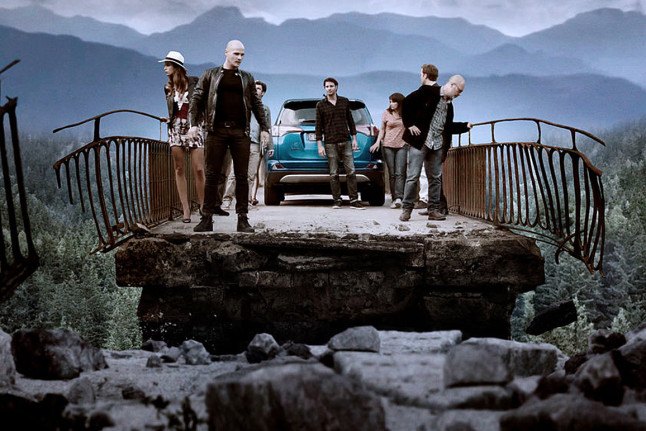 ‘The Chalet’ is an intriguing tale of a group of friends who gather for a wedding. They pick up a remote chalet somewhere hidden in the French Alps for the occasion. But things soon take an ugly turn when they find themselves trapped in the chalet. Their shock intensifies when a coldblooded murderer appears from the woods. Set in a largely abandoned French village called Valmoline, the series consists of six episodes. ‘The Chalet’ is a well-made thriller which builds up horror at a slow pace. The narrative allows the tension to grow exponentially as the desperate group realizes how helpless they are, with a killer looking for them. 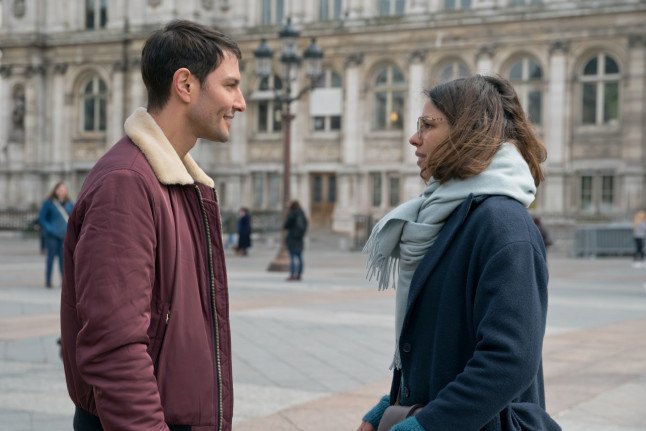 ‘The Hook Up Plan’ is an eight-episode French romcom on Netflix. The series revolves around Elsa, played by Zita Hanrot, who is trying to move on after a painful break up that happened two years ago. Even though it’s been two years since the break up with Maxime, she is unable to forget the past and it continues to haunt her. Things go out of hand when her best friends Charlotte, played by Sabrina Ouazani, and the married and pregnant Emilie, played by Joséphine Draï‎, decide to hire an attractive and charming teacher named Jules, played by Marc Ruchmann, to seduce Elsa. Charlotte’s plan is to help her friend move on from the painful memories. But the scheme works more effectively than she expected and the escort changes Zita’s life forever. The cast members’ onscreen chemistry is the key factor of the show. 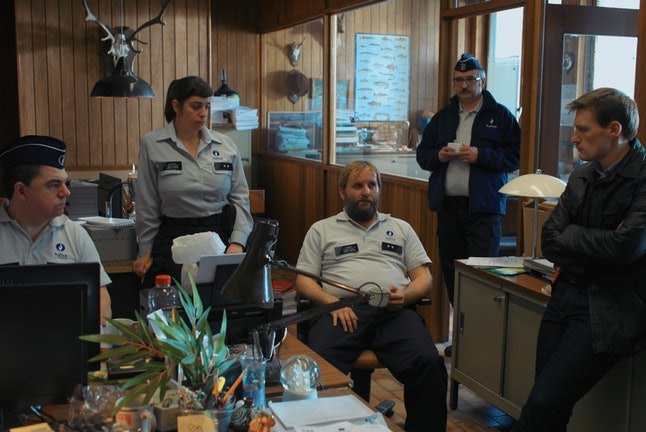 ‘The Break’ is a Belgian crime drama which is quite popular among fans for its twists and dark humor. The plot follows a detective investigating the mysterious murder of a 19-year-old athlete in a remote Belgian town. When the villagers find the mutilated dead body of an African footballer in a river, it triggers a series of unnatural incidents. Rumors spread across the village that the killer might be hiding in the nearby woods. The detective is engulfed by the mystery of the murder and the grumpy villagers. The series is hailed by critics as a trailblazer in the new wave of European crime drama on Netflix. 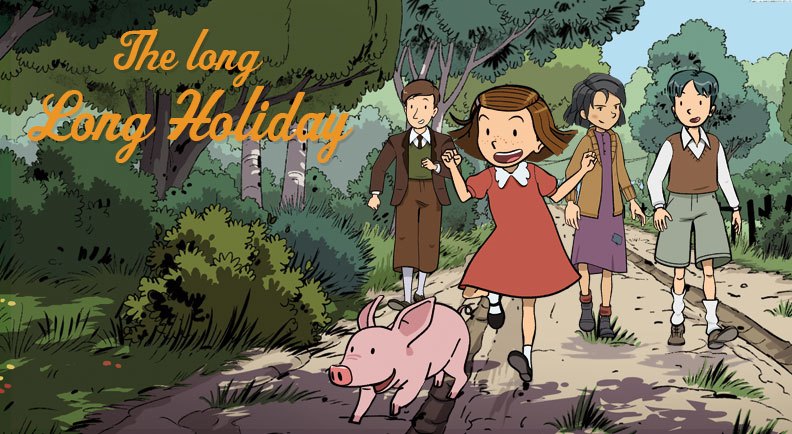 ‘The Long, Long Holiday’ is an animated family drama that unfolds against the backdrop of World War II. The plot follows the kids, a brother and sister, who are left by their parents at their grandparents’ house. The war is at its peak and the kids are busy exploring the secrets of Normandy coast. They have a couple of weeks at their grandparents’ home and enough time to explore the place and its people. The series garnered praise for its portrayal of the impact of World War on a small European village through the eyes of two urban kids. Despite the war, the kids experience wonderful adventures and make new friends with animals and people. 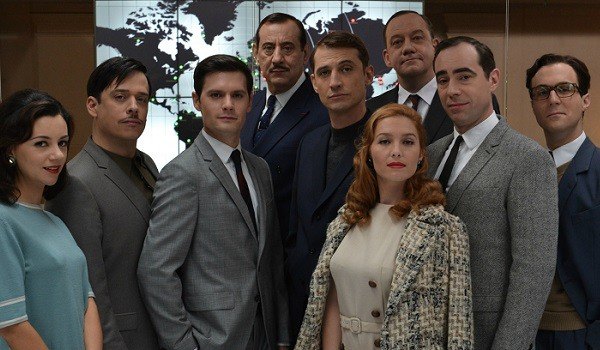 ‘A Very Secret Service’ is a French spy comedy set against the backdrop of the Cold War in 1960. The series, which is touted as an absurd and unconventional spy drama, follows André Merlaux, played by Hugo Becker. He is summoned to train with the cadres of the French Secret Services. Merlaux struggles to cope up with the new world of secret people with a dubious look on their faces. They always look at him with suspicion, or he believes so. The plot shapes up around Merlaux’s stand-off with his foreign and bureaucratic nemesis. The series is an analysis of the emotional and psychological impacts of the Cold War on the people who serve on the war front. ‘A Very Secret Service’ is also a cultural and social commentary of France in the early ’60s, through deadpan comedy. 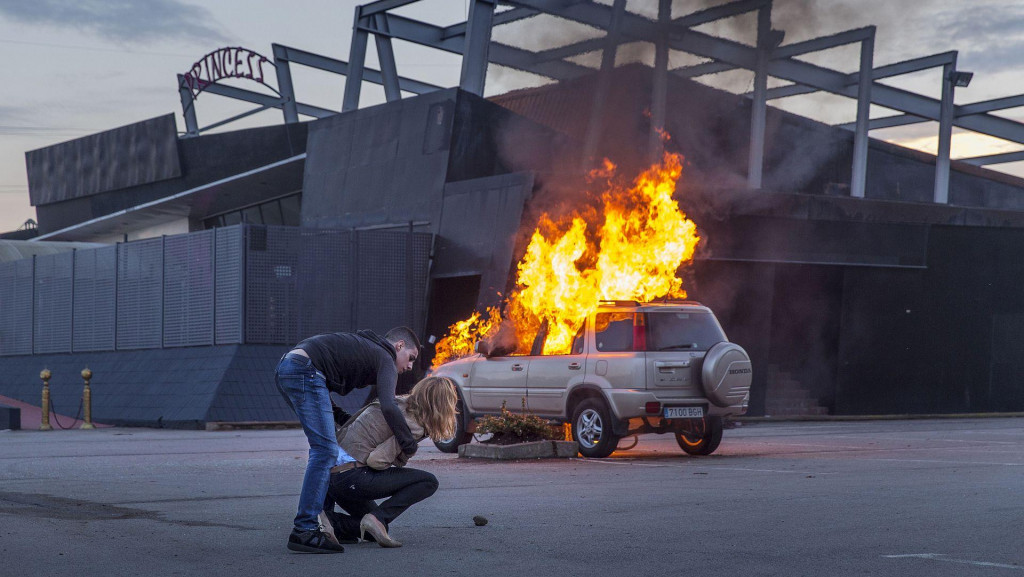 ‘Cannabis’ is a thrilling journey through the international cannabis trade route from North Africa to the Mediterranean. The series takes viewers for a high-octane ride across North Africa, Spain, France, as we come across several people functioning as nodes for the trade network. What begins as a minor marijuana theft from a boat in the middle of the Mediterranean, halfway between Spain and Africa, accelerates into a full-blown thriller ride. The theft of two tons of marijuana triggers a series of events from Marbella to Paris, through the dusty mountains of northern Morocco. In the interconnected chain of cannabis trafficking network, the small incident can blow up the entire multi-million dollar industry that feeds farmers, chemists, shippers, brokers, wholesalers, retailers and customers. The series has become a fan favorite for its well-defined characters and unexpected twists and turns. All the six episodes of the first season of ‘Cannabis‘ are available for streaming on Netflix. 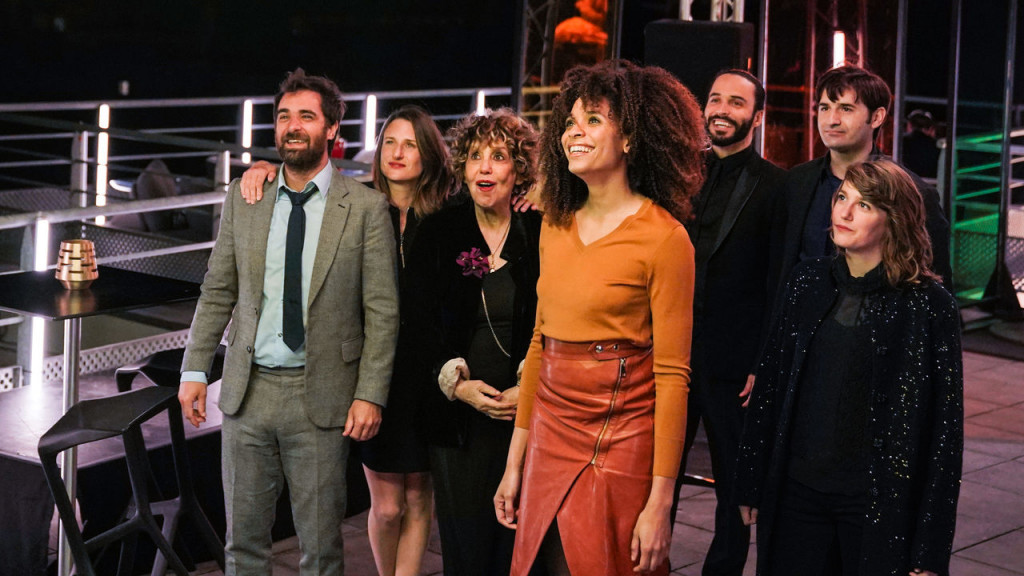 ‘Call My Agent’ is a comedic take on the lives and works of people working in the world of talent agencies in France. The plot follows a method actor who finds it difficult to get rid of a film character he played in his last movie. He even signs a new contract using the name of the character! His agent Andrea finds the contract and searches for the actor. She finds him in his home garden, still dressed in his character’s clothes. He refuses to listen to Andrea’s explanations. ‘Call My Agent’ evokes laughter using some genuinely hilarious situations and characterizations. At times, the series is a spoof that pokes fun at method actors, who disappear into their characters and are unable to come out. The series also depicts the daily lives of the agents along with some funny cameos of famous French actors in every episode. All three seasons of ‘Call My Agent!‘ are available for streaming on Netflix. 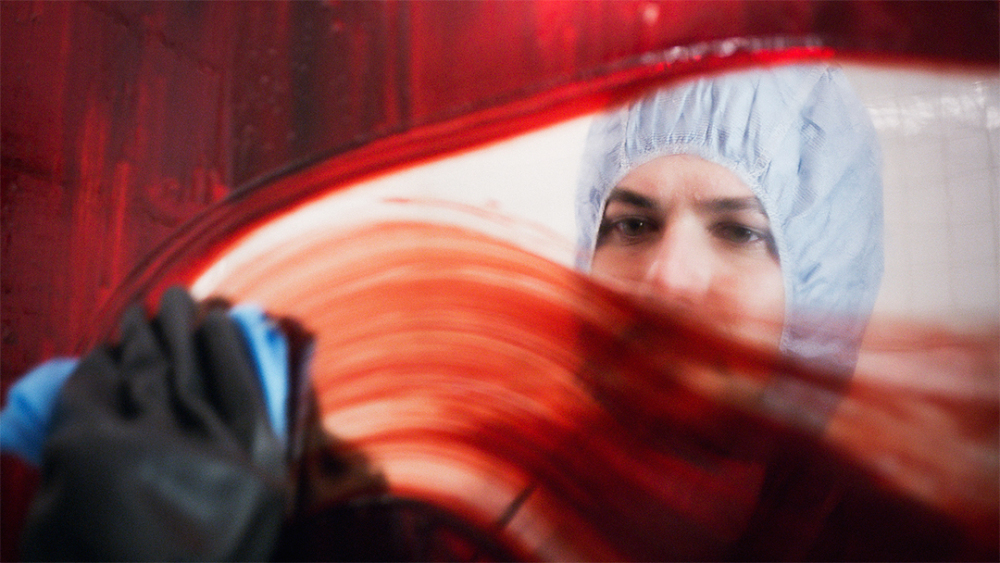 ‘Spotless’ is a crime drama set in London, which follows a troubled family man, Jean Bastiere. He leads a typical lower middle class life with his wife and two children. The mundane rhythm of his life is disrupted when Martin, his brother, arrives unexpectedly after so many years. Known as an outlaw, Martin’s arrival turns Jean’s life upside down. Jean finds himself in a difficult situation because Martin brings a number of painful memories from their childhood with him. To make things worse, Jean learns that his brother has arrived with a dead body of a woman in his van! All the ten episodes of the first season of the show are available on the streaming giant. 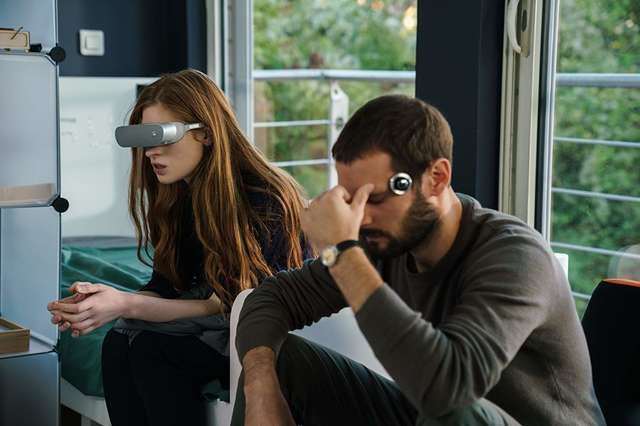 The French sci-fi drama ‘Osmosis’ is a Netflix original series in which humans live in a future controlled by algorithms. The plot centers on a new algorithm that matches a person with his/her soulmate. ‘Osmosis’ unfolds almost entirely in a sterile environment of the titular tech company which is a couple of weeks away from introducing its path-breaking matchmaking technology. Ahead of the official launch, Osmosis tests their beta version of the matchmaking app on a small group of subjects. However, an algorithm that can dig deep into your brain corridors comes with a price. The same revolutionary technology can be used to copy our innermost thoughts and buried secrets. Though a slow watch, ‘Osmosis‘ is full of thrills, twists and love.