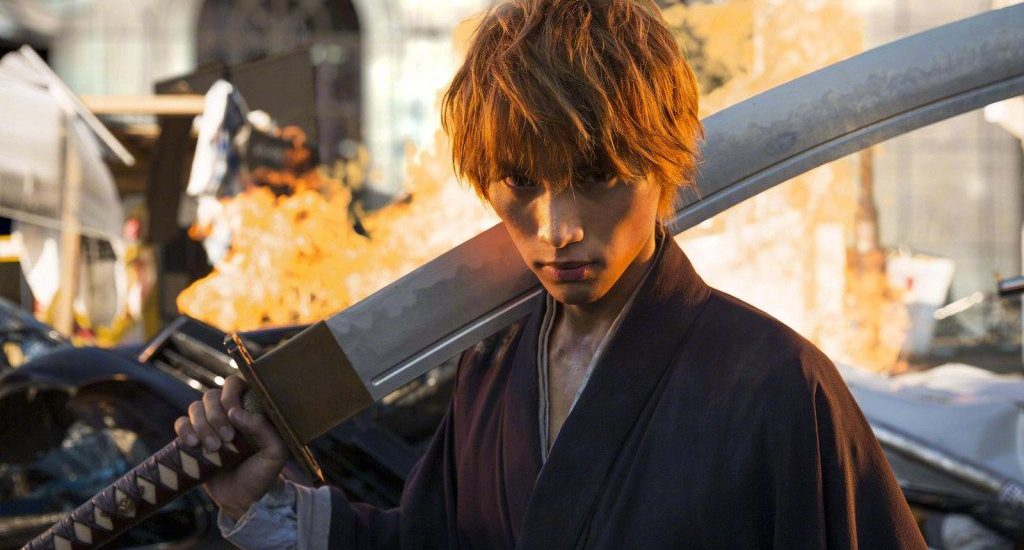 The Japanese film industry is one of the largest and oldest in the world. The history of cinema in Japan can be traced back to almost 100 years. Movies were first shown in Japan way back in 1896. And since then, the art has become integral to Japanese popular culture. The fascinating thing about Japanese cinema is that despite being so modern and innovative in its presentation, camerawork, editing, and designing, they are deeply rooted in Japanese culture and can act as a gateway into knowing the history and philosophy of the country better. The quality of films made in Japan, both artistically and technically, can easily be regarded as among the finest in the world. To illustrate this point, we can look at the Sight and Sound magazine’s list of the best Asian films. We shall see that there are eight Japanese films in the top 12.

Japan has also produced many seminal filmmakers who can well be regarded as some of the greatest directors to have ever stood behind the camera. The first name which comes to mind is definitely Kenji Mizoguchi. Some of the films he has made can be considered textbooks of filmmaking. His greatest films include, ‘The Life Of Oharu’ (1952), ‘Sansho The Bailiff’ (1954), and ‘Ugetsu’ (1953). Mizoguchi’s framing of each shot is impeccable, and the camera captures the realities of Japan of the Middle Ages. Another filmmaker who we all know about and love is none other than the great Akira Kurosawa. It was Kurosawa who made the world sit up and take notice of the films being made in Japan. His movies like ‘Rashomon’ (1950), ‘Seven Samurai’ (1954), ‘Yojimbo’ (1961), and many others are masterpieces of world cinema.

The influence of Japanese movies have been far and wide throughout the world of cinema. Several iconic filmmakers like Martin Scorsese, Quentin Tarantino, and Sergio Leone are heavily inspired by films of this country. With all that said, here’s the list of really good Japanese movies on Netflix that are available to stream right now: 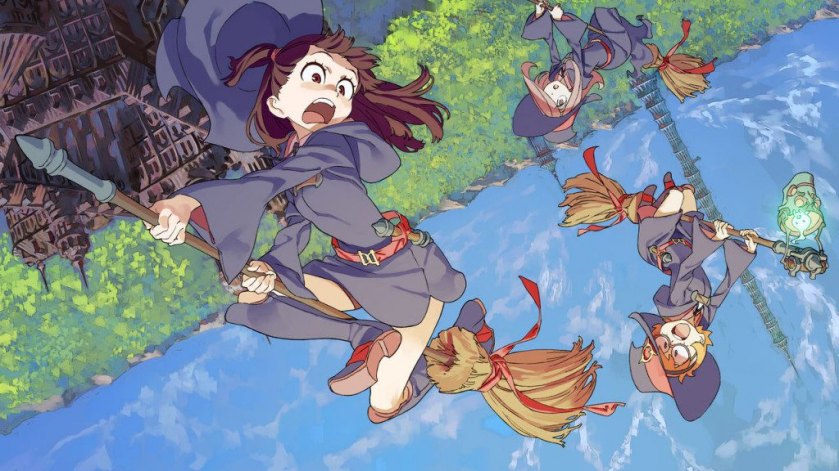 This short film produced in 2013 gave birth to a massive franchise of the same name. The film is about a little girl called Akko who is a huge admirer of a witch called Shiny Chariot. Wanting to be like her idol, Akko decides to join a school to train as a witch. The school she joins is called the Luna Nova Magical Academy. Though a shy girl, Akko does manage to make two friends – Lotte Jansson and Sucy Manbavaran. The problem with Akko is that she is not at all a good student. She has problems performing magic in class. Moreover, Akko’s great love for Shiny Chariot also makes her an object of ridicule among her classmates.

One day, Akko gets an opportunity to prove her worth when a teacher sends their class inside a magical dungeon in order to retrieve some magical objects. Inside the dungeon, Akko manages to find Chariot’s magical instrument called the Shiny Rod. In the meantime, the best student of the class, Diana Cavendish, mistakenly awakes a dragon which was there inside the dungeon. The only person who can stop the dragon from getting more powerful and destroying the school is Ako with her newfound instrument. 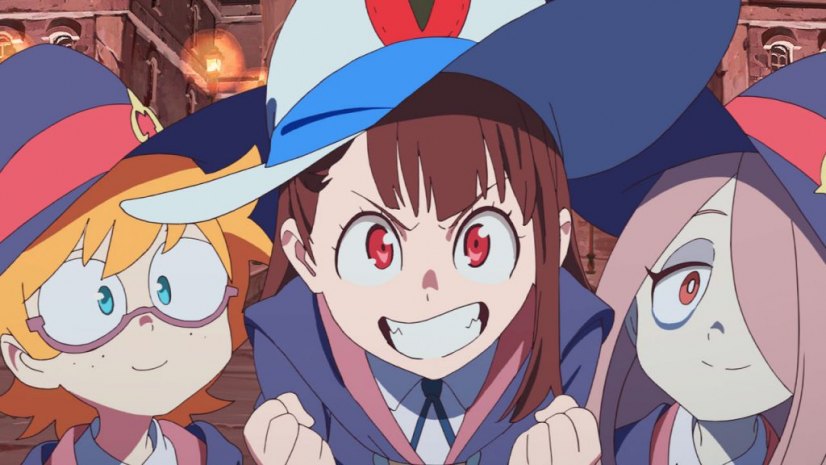 The popularity of the first ‘Little Witch Academia’ encouraged the makers to come out with this sequel. This film is a continuation of the story of the first film. Here, we see that Akko along with her friends Lotte and Sucy have been identified at school as troublemakers and they have been given a task to complete. Failing to do so will result in them being kept back in the same standard.

The group is joined by three other troublemakers — Amanda O’Neill, Constanze Braunschbank Albrechtsberger and Jasminka Antonenko. The six of them have been asked to successfully organize and carry out the school’s annual parade. While the other witches mainly want to focus on the spectacles of magic, Akko thinks that it will be the perfect opportunity to show the world that their unfounded fear of witches is of no use and that the stigma should be done away with. However, the other girls don’t seem to agree with Akko’s plan. Akko decides that she will use the school’s Sorcerer’s Stone to derive magic for her Shiny Rod. This will enhance her ability to perform better in the parade. But when a kid attempts to steal the rod, a monster gets unleashed. 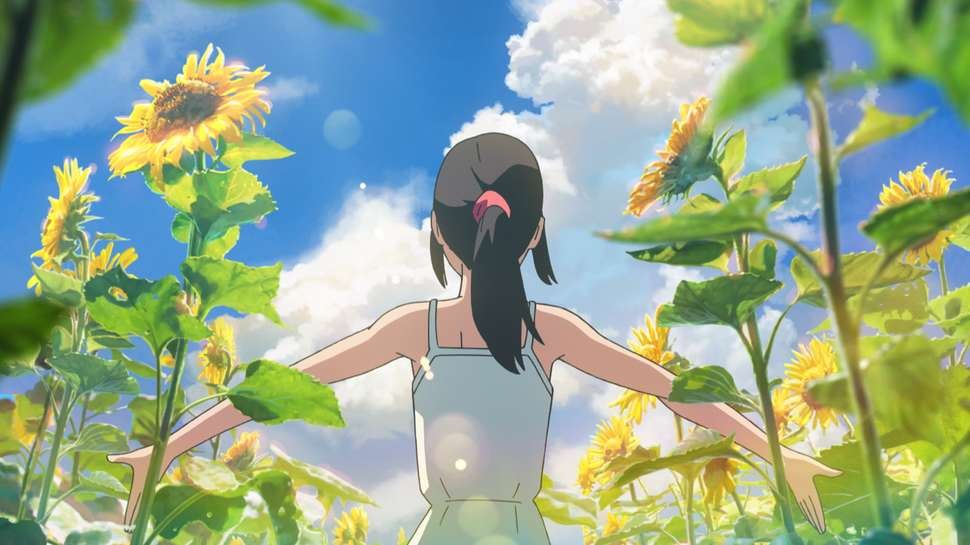 ‘Flavors of Youth’ is an anthology film comprising of three separate stories — ‘The Rice Noodles’, ‘A Little Fashion Show’ and ‘Love In Shanghai’. The film is a Japanese/Chinese co-production. ‘The Rice Noodles’ is the story of Xiao Ming and his immense love for San Xian noodles. He used to have San Xian noodles with his grandmother, who has now passed away. His connection to the place where he lives is through his memories of having that delicious food with his grandmother. But one day, the shop closes and Ming also leaves town. The new place he visits also has a San Xian noodles shop, but it is hardly as good as what he used to have as a child.

The second story, ‘A Little Fashion Show’, is about two sisters, Yi Lin and Lulu. While Yi is a fashion model, Lulu is a designer. Yi Lin is quite popular, but she fears that her popularity is being rivaled by a new girl who is taking the fashion world by storm. Afraid that she might lose her place, Yi Lin works harder to look better, but she ends up fainting at a fashion show. After this incident, Yi Lin decides it is best if she retires and asks her sister to teach her designing instead. Lulu does not take kindly to her sister’s proposition.

The third film in the anthology is called ‘Love In Shanghai’. This story is about a boy called Li Mo and a girl named Xiao Yu. The two of them develop a romantic relationship after a minor accident brings them together. However, a dent in their relationship arises when Xiao Yu says that her father wants to send her to a university far away for higher studies. Saddened, Li Mo decides to work hard to go to the same university, and despite being a poor student, his hard work pays off. However, when he goes to meet Xiao Yu to inform her of his success, we see that Xiao has not managed to clear the entrance examination. 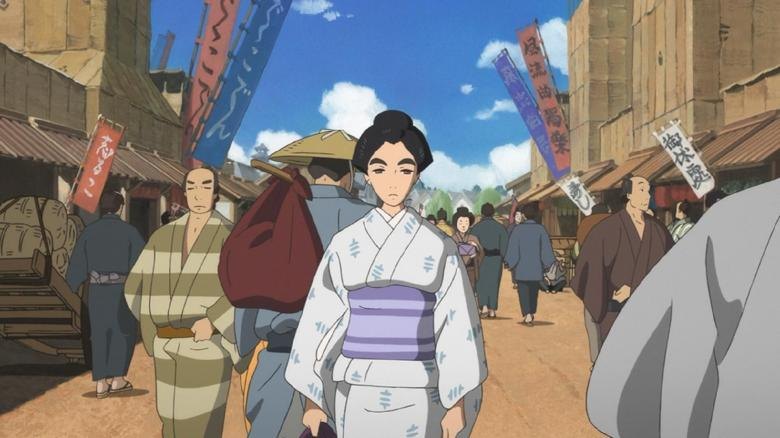 The story of this film is set in Edo (presently Tokyo) in 1814. A girl called O-Ei is the central character of the story. She is one of the daughters of Katsushika Hokusai, a famous painter known for his exquisite skills. Her father is known all over Japan because he can draw beautiful pictures even on grains of rice. We see O-Ei helping her father in his work and also working on her own projects. However, she is sometimes so busy that she forgets to sign her own paintings. This keeps O-Ei from getting the recognition she deserves.

Apart from her life as an artist, we also see O-Ei’s relationship with her half-sister who is physically challenged. The two sisters have a great bond between them till the younger one passes away. The story then moves on to O-Ei’s personal life. We see that after one failed relationship, she remains single throughout her life. Even sexuality does not interest her much though her father asks her to work on shunga paintings (erotic Japanese art). The film gives us a detailed account of 19th century Japan, the influence of Buddhism in the country, and also a taste of authentic Japanese country life. It must be mentioned here that this film is entirely based on a true story. The movie also received high praise from critics. 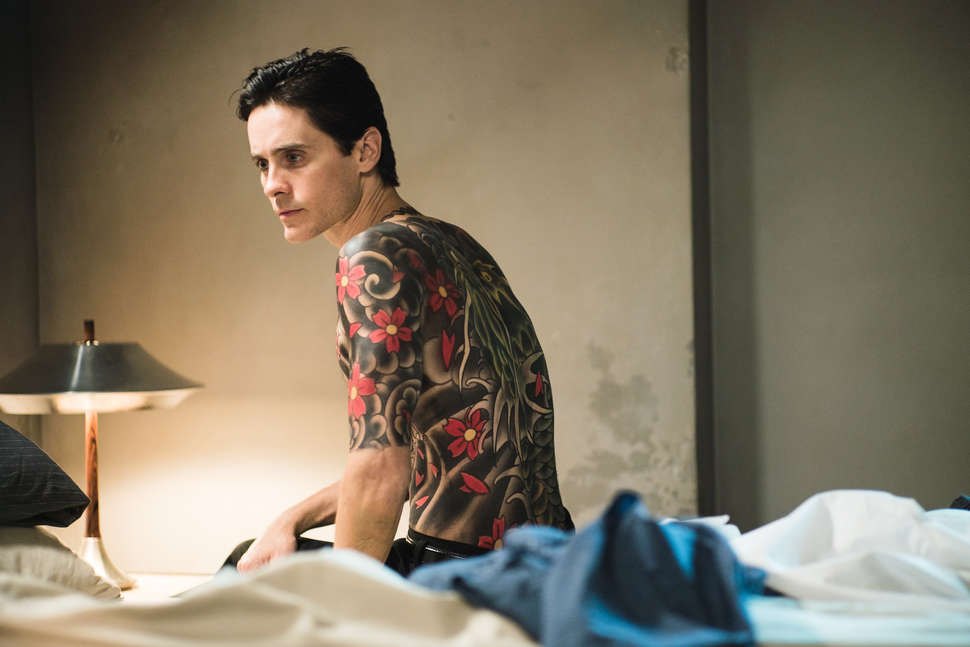 A Japanese/American co-production, ‘The Outsider’ stars Jared Leto in the leading role of Nick, a United States soldier, who stays back in Japan after the Second World War. He is a war criminal, and when the film begins, we see that Nick is all alone in a prison mostly crowded by Japanese criminals and members of the yakuza. When Nick saves one of the yakuza members from death, they help him get out of prison as a token of appreciation and offer him a job with their clan.

Nick proves to be an extremely violent individual who often gets into fights. The clan he has joined, Shiromatsu, is headed by a patriarch who wants to hold on to his old beliefs and customs and does not want to adapt to the changing times or the post-war economy of Japan. This naturally weakens their clan and seeing this as an opportunity to take over their businesses, the other clans want to engage in fights with them. One such clan is the Seizus. They challenge the Shiromatsu members to a fight in the latter’s strip club and are taken by surprise when Nick attacks their leader violently. Later, though, Nick offers his sincere apologies by performing a yubitsume (this is a Japanese method to show apology by cutting off a portion of one’s little finger). However, even this does not pacify the Seizus. So, Nick offers the leader of his clan to go for an all-out gang war. The film was not well received by critics but it surely is an entertaining watch. 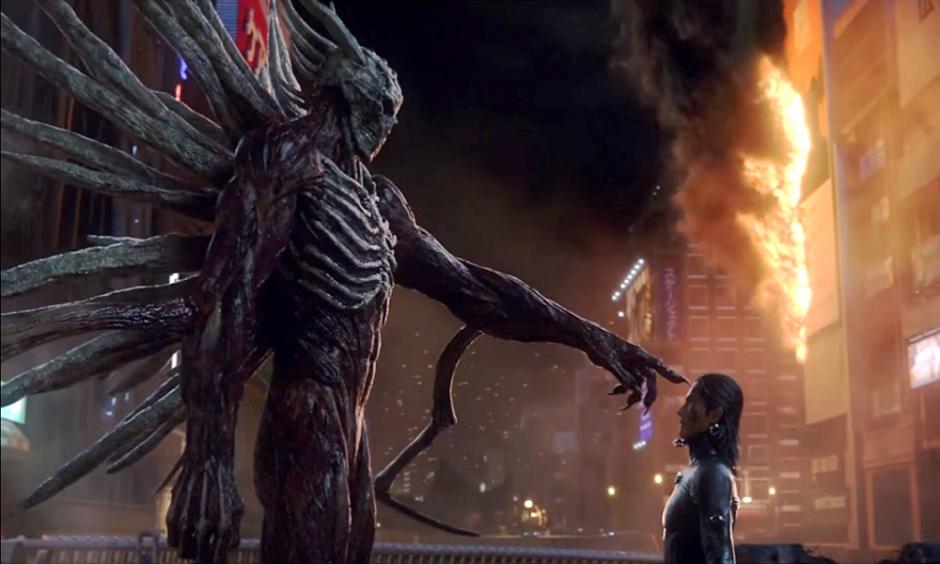 ‘Gantz:O’ is a science fiction/action film which follows a group of people who have suddenly found themselves trapped in a room. One of them explains that all of the trapped people have died and have been transported to this room. They have to constantly keep fighting monsters as a task to survive because otherwise, the monsters will kill them and they will no longer have a chance to go back to the earth. When the entire group steps out, they see that the place they are in somewhat resembles the Japanese city of Osaka. They do not have much high-equipped gear and thus struggle to fight the monsters. The movie was commercial success, with audience praising the gripping action sequences. 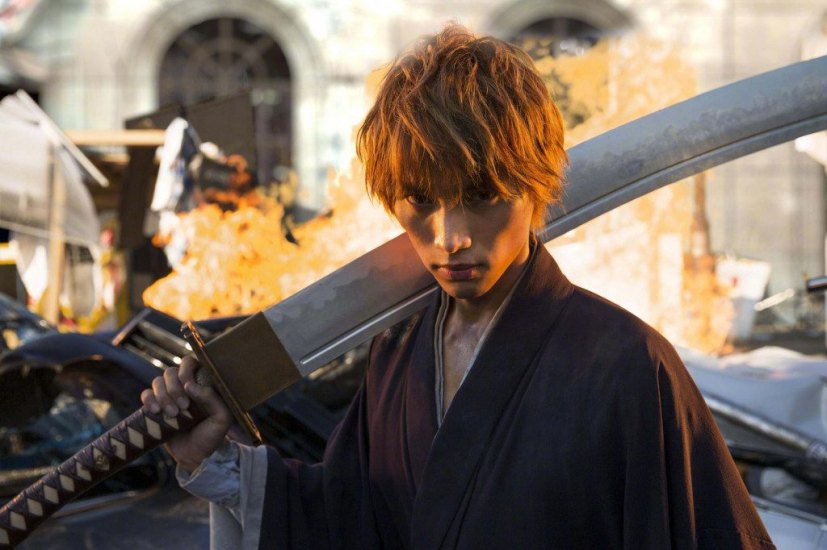 Shinsuke Sato directed this live-action version of the famous anime series of the same name. The story follows a teenage boy called Ichigo Kurosaki, who has the ability to see ghosts. This unique power of his brings him in contact with a girl called Rukia, who is a Soul Reaper. She says that her job is that of a psychopomp — a divine figure whose job is to take deceased souls to heaven. Rukia tells Shinsuke that creatures called Hollow are converting normal people into villainous creatures and that they have to be stopped. She believes Shinsuke has the power to get the job done. As they talk, a Hollow attacks Shinsuke’s house and injures Rukia. She transfers her powers to Shinsuke so that he can defeat the monster. Using his already-enhanced spiritual powers, Shinsuke gets the job done. But when he attempts to return Rukia her power, he sees that doing so is not that simple. He has to kill enough Hollows to gain the ability to transfer powers in the first place.

After a while, we see that Rukia’s brother Byakuya has sent a lieutenant to take Rukia back home. But when he discovers that Rukia has given her powers to Shinsuke, he chastises her for her carelessness. To help Rukia, Shinsuke promises that he will kill the strongest Hollow called Grand Fisher so that his powers increase quickly and he is able to transfer them back to Rukia. The movie is based on a manga series of the same name. It has received positive reviews from critics who praised it for its depiction of mythology in a way that appeals to and engages the audience.