Netflix’s ‘LA Originals’ is a dream come true for anyone interested in knowing more about LA street culture, along with the art movement that flourishes in the West Coast. We are introduced to tattoo master extraordinaire, Mister Cartoon, and his friend, the acclaimed photographer, and director, Estevan Oriol. They are considered legends in the world of hip hop. However, true to the very spirit of hip hop, the duo’s work is tied to their LA origins. Thus, we look into the significant moments of the Chicano and street art movement that propelled the two to legendary status. 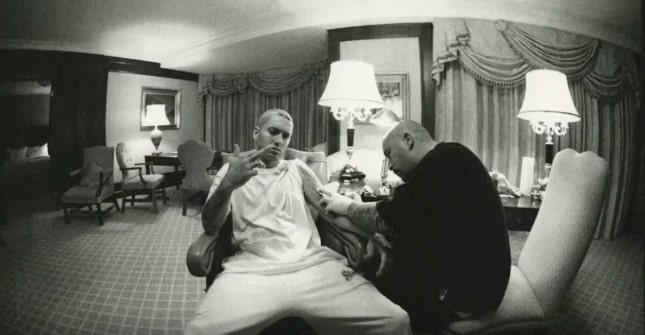 ‘LA Originals’ is an unscripted documentary directed by Oriol. It features interviews from hip hop giants like Snoop Dogg, Dr. Dre, Eminem, Cypress Hill, and 50 Cent. Naturally, since Oriol is heading it, one can expect a degree of truth to be behind the documentary. In his own words, he’s seen a lot of ‘cool shit’, which will make its way into the documentary. As for the hip hop-centric nature of it, Oriol was taken in by the first sounds of hip hop. He commented, “I was around when hip-hop first came out. I loved it the first time I heard it.” Cartoon started as a graffiti writer and shifted to tattooing.

Eventually, the two met several decades ago and started Soul Assasins (SA) Studios Global, a lifestyle marketing agency. ‘LA Originals’ is about the friendship between the geniuses, who built their empire. Both of them bond over, and are inspired by Chicano culture, and their home base, Los Angeles.

What is the Chicano Art Movement?

You might be wondering what the Chicano art culture is, that keeps cropping up when we speak of ‘LA Originals’. Well, it is art created by Americans of Mexican descent. The art movement came out of the broader Chicano Movement in the late 1960s and early 1970s. Chicano art started as a protest culture, with vibrant artwork often in your face.

The art movement was intended as a fight for collective identity and a struggle against racial stereotypes imposed on Mexicans. The idea is to involve the community and place artwork where everyone can access it. Mexican muralist and pre-Columbian art forms influence Chicano art. Among the major artists to impact the movement are the ‘tres grandes,’ Diego Rivera, Jose Clemente Orozco, and David Alfaro Siqueiros.

Some of the popular subject matter explored by the Chicano art movement include immigration, the feeling of displacement, and life in the barrio. Chicano art is not just a tool of resistance, but a means of empowerment as well. You can check out Mister Cartoon’s wall art, at a Chicano landmark, to get a sense of what is being talked about here.

Complete wall at @casavegarestaurant on Ventura Bl in Vallet area,when they re open check out some fire Mexican food, been a Chicano landmark since 1956 #MisterCartoon WCA AWR @soul.assassins @pegasusla thanks Ponti ..trip on my Bro Arturo’s stupid clean “Paid in Full” 57 built by @thekingofchevys

Who is Mister Cartoon?

Born and raised in the Harbor area in Los Angeles, Mark Machado, or Mr. Cartoon, knew that art was his passion from a young age. He started by airbrushing tees and lowrider cars before he adopted the legendary “Fineline Style” of tattoo art, which was developed in the California prison system.

Soon enough, Cartoon was inking the who’s who of the hip hop scene. It included Eminem. Cartoon not only did 80-90% of Eminem’s tattoos, but he also helped design the logo of the rap legend’s Shady Records. You can check out a post by Mister Cartoon below, where we see Eminem explaining the meaning of one of the tattoos from the LA maestro.

To get a sense of how big Mr. Cartoon is, check out the video of him tattooing the recently deceased legend, Kobe Bryant.

Great to have the Homie @kobebryant roll thru to add his new daughters name "Bianka Bella" congrats to his family! Tattooing Kobe & @mrcbooz is a honor & they always get tats dedicated to their families! #MisterCartoon @bishoprotary #nocturnalink @h2oceanproteam #h2ocean #tattoomachine #family

Who is Estevan Oriol?

Born in Saint John’s hospital, Santa Monica, Estevan got a start as a bouncer. Soon, he was managing tours for bigshots like Cypress Hill. Esteban already had the access most photographers could dream of, and his father, Eriberto Oriol, himself a famous photographer, suggested that Estevan document his adventures.

Influenced by the works of Grandmaster Flash and the Furious Five, and The Sugarhill Gang, Estevan was tapped into the rise of iconic hip hop artists. Accordingly, his photographs reflected the rise of the lowrider and hip hop culture.

Now, he’s been at it for more than a decade and has shot some of the biggest celebrities. Snoop says in the documentary that “If you ain’t get shot by Estevan, you got a weak photographer.” Among the stars Estevan has shot are Kim Kardashian, Eminem, Dennis Hopper, Al Pacino, Robert De Niro, Ice Cube, and even Kendrick Lamar. You can check out some of his photographs below.

Happy Birthday to one of the greatest of all time!!! @eminem one of the coolest people in the music bizness to work with Easily. We did this at Encore Studios in Burbank, some 90’s hip hop type shit, ya feel me ? Like Carl Says “jus don’t feel me to hard” Camera: Canon AE1 Lens: 28mm Film: Kodak tri x 400 #eminem #shadyrecords #estevanoriol #encorestudios #blackandwhitephotography #losangelesphotographer #35mmfilm #hiphop #thisislosAngeles #dragopublishing @drago_publisher #estevanoriolphotography

Apart from photographing celebrities, Estevan also directs music videos. He’s directed the Detroit rap group, D-12’s “I Shit On You”. Estevan’s photographs are a testament to LA street culture itself, and he has three books to his name, including “This is Los Angeles”, “L.A. Portraits”, and “L.A. Woman”.

Both Oriol and Cartoon are serious about their creative pursuits, and the representational politics they capture. ‘LA Originals’ is a penetrating look, not just at the lives of the artists, but their friendship as well. With interviews from people they have worked with, the authenticity is put across clearly to viewers.