Debutant filmmaker Arati Kadav melds science fiction and mythology together in her visionary and surreal offering, ‘Cargo’, a film that gives a very much modern perspective on isolation and human interaction. With ‘Cargo’, Kadav is on familiar ground, she has previously made a number of short films that deal with other oft-visited branches of the genre. Working in an industry where science fiction is criminally ignored, Yadav’s austerely-budgeted film doesn’t ask its viewers to suspend their disbelief. Instead, it explores very familiar ideas through the scope of speculative fiction. SPOILERS AHEAD. 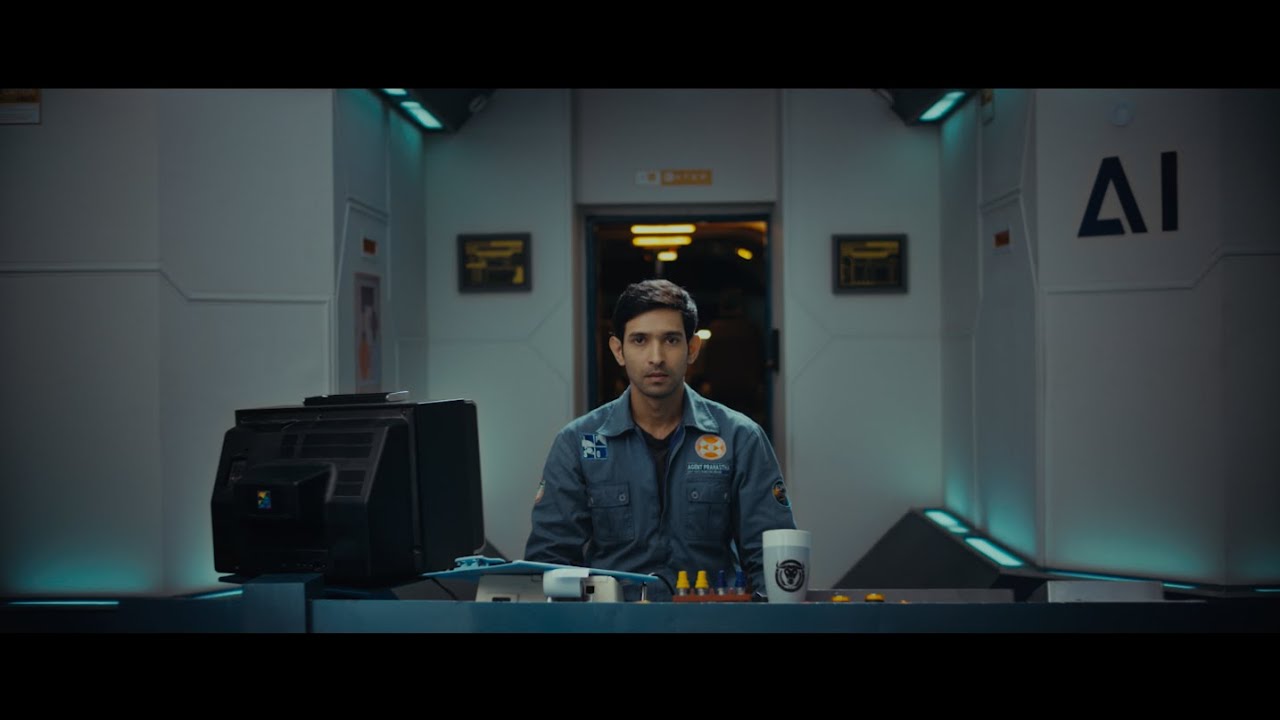 The story revolves around Prahastha (Vikrant Massey), a member of the race of homo rakshasa who works alone onboard a spaceship called Pushpak 634A as an employee for the Post Death Transition services. His job is to help humans, also known as cargos, immediately after their deaths by healing them and erasing the memories of their previous lives, so they are prepared to transition to the next. His lonely and unvarying existence is disrupted by the arrival of a new assistant, Yuvishka Shekhar (Shweta Tripathi). Her optimism and energy initially irk Prahastha, but he eventually warms up to her and begins truly enjoying the company of the only living being in millions of miles.

Their brief moments of shared happiness are interrupted when Yuvishka begins losing her healing power, without which she will have no purpose on the spaceship and be forced to return to Earth. Desperate to keep her there, Prahastha asks her to take a break from work, hoping that it will restore her power. Meanwhile, he hasn’t realized that he has been on the spaceship for far too long, and cargos that he has previously helped reincarnate start reappearing in his spaceship. 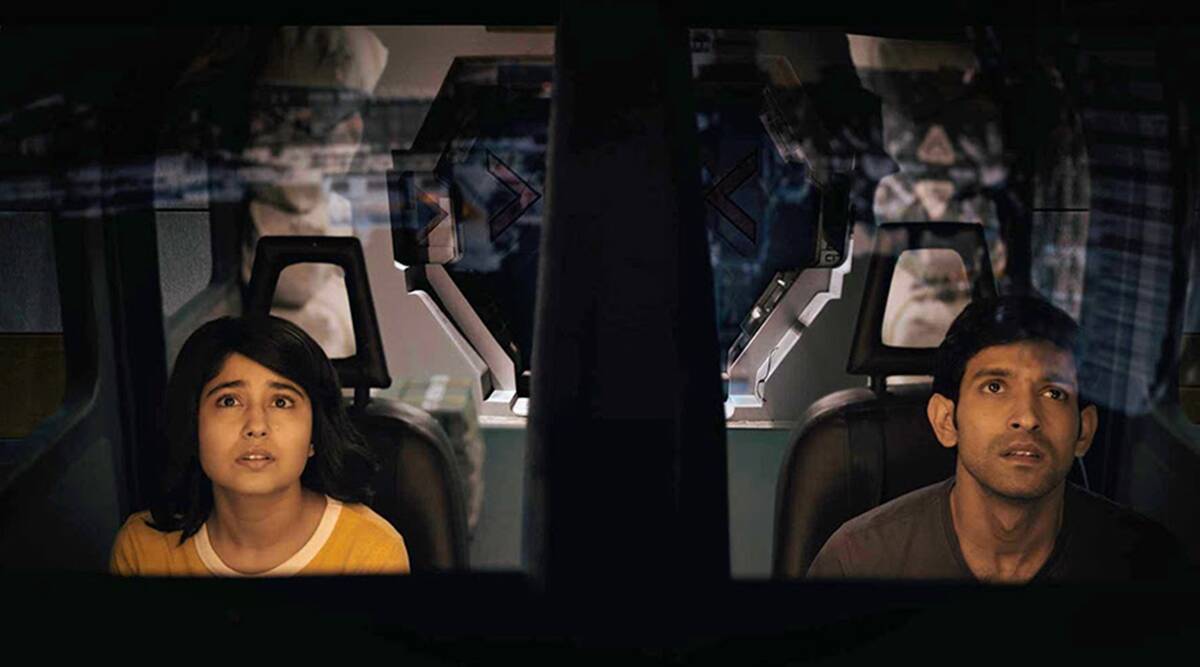 While Kadav’s film is not exactly a hard sci-fi, it does have some futuristic elements which the Indian audience might find baffling. Giving the story a distinctive mythological aspect helps her negate that. Prahastha is named after a minor character from the Indian epic Ramayana. Also a rakshasa, Valmiki’s Prahastha serves as a general in Ravana’s army and is his maternal uncle. The familiarity of Indian mythology gives the home audience an easy entry to the dense plot of the film. We are given expositions about a cold war between the humans and rakshasas, which only ended when the latter race took on the responsibility of guiding the former through their reincarnations.

It’s a bleak worldview. There is no heaven or hell in this universe. After you die, you are simply reborn as another human. As one of the cargos correctly points out, if there are no ramifications for good or evil behavior and everyone ends up at the same place, there is no point of adhering to morality and social norms.

These Grim Reaper-esque astronauts are regarded as celebrities in that world and are often the subjects of think-pieces and articles. Kadav’s universe is not much different from ours. People are also desperate for likes and views for their social media content there. Although the larger-than-life sci-fi and mythological aspects are ever-present, the writer-director grounds the script through the presence of real-world technologies like smartphones.

The most important theme of ‘Cargo’ is the sense of loneliness that Prahastha feels before the arrival of Yuvishka. He has been on the spaceship for the past 75 years, and in terms of technology of the world and even the ones related to his profession, his knowledge has become painfully outdated. Human isolation in the vastness of space is not a unique concept to this film. Movies like ‘Solaris’ and ‘Gravity’ have approached the subject with varying degrees of success in the past. What sets ‘Cargo’ apart is how the film uses it as a framing device to launch a conversation about permanence and death. As a rakshasa, Prahastha is a semi-immortal being (though not completely invulnerable, as shown when he is attacked with a knife by one disgruntled cargo) and has listened to thousands of people speak about their unfulfilled dreams. For years, he has been the only vessel in which these dreams still exist in the form of his memories. This adds a tragic element to Prahastha’s story. It is hinted that he chose this job after his separation from his former lover, Mandakini (Konkona Sen Sharma), indicating that his isolation and alienation are self-inflicted.

Yuvishka lands on the spaceship brimming with youthful positivity. At first, Prahastha is wary of her, being unaccustomed to the sudden burst of energy that she brings to his life and having no idea about how to deal with it. However, as time progresses, they develop a mentor-mentee relationship. Prahastha becomes so comfortable with her presence around him, that the prospect of losing her becomes unfathomable. She brings him out of the shell that he has built around himself over the past seven decades and even gets him to speak with Mandakini. This brings Prahastha a much-needed closure. Alongside healing the deads on their way to transition, Yuvishka initiates the healing of her mentor.

When Prahastha and his superior officers realize that he has been on that spaceship long enough that his early cargos are returning to him, they decide that it is time for him to retire. The film begins with Yuvishka’s transition into the spaceship and ends with Prahastha’s transition back to Earth. His self-exile ends only when he is finally ready to move on.

‘Cargo’ also offers its two lead characters a wistful conclusion. It’s open-ended and vague but full of possibilities. Before departing for Earth, Prahastha leaves for Yuvishka the same watch for which he berated her earlier in the film. With her healing power back, she assumes Prahastha’s erstwhile position on Pushpak 634A. Their path seems to fork. He might build a new life on Earth, while she embraces her turn as a mentor to her own assistant (Rohan Shah). But their near-immortality makes it a very real possibility that they will meet each other again, when Yuvishka’s own cargos begin reappearing again, and she has to retire. It’s not only a circle of transition for the humans but for the rakshasas as well. Despite their near-immortality, they too are bound to it.