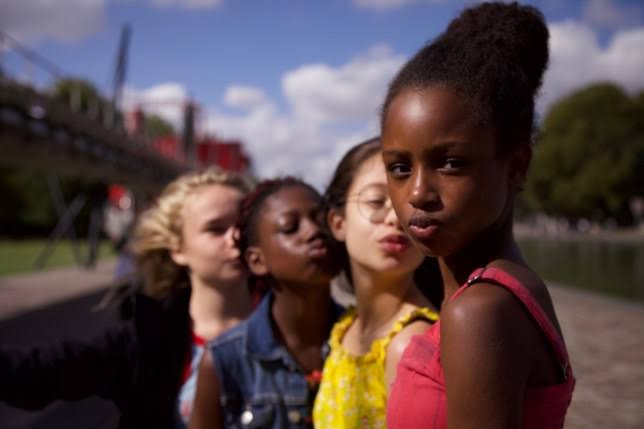 Netflix’s ‘Cuties’, a French film directed by Maïmouna Doucouré, has already gained notoriety among netizens. After a poster inappropriately depicting the film’s young star cast went viral, Netflix was forced to retract it and apologize to its audiences. This contention has propelled ‘Cuties’ from obscure international film status to controversial film repute.

In ‘Cuties’, Amy, an 11-year-old immigrant from Senegal, is new to the Parisian lifestyle. She comes from a family with strictly conservative beliefs and a rigid way of life. For instance, when her father takes a second wife, as is permitted in their customs, Amy’s mother is forced to accept his second marriage without question or argument. Amy becomes even more disillusioned with her traditions when she hears her mother barely choking back sobs while conveying news of her husband’s second marriage to a friend.

At the very start of the movie, we also see Amy being preached to by her aunt about the evils of promiscuity. Soon after, she meets Angelica, who seems to preach to her the exact opposite. Angelica is part of an exclusive group of dancers with the titular name, ‘Cuties.’ The ‘Cuties’ – comprising Angelica, Jess, Coumba, and Yasmine – are a gang of dancers with age-inappropriate dressing styles and even more precocious dance routines. When Yasmine falls out with the rest of the group, Amy is inducted in her place. Like any true adolescent faced with peer pressure, she deftly picks up their mannerisms and dance steps and gears up to perform with them at a district-wide dance competition. The girls are often comical in their precociousness; their real age shines through in their many awkwardly misconstrued beliefs about sex. Amy and Angelica also share many light-hearted moments of innocence – a gummy-bear eating contest, a pillow fight, guileless fears and dreams – that showcase the extent to which they pretend to act beyond their age.

Amy uses dance and her budding popularity as a form of escapism from her restrictive home life. But soon, she finds herself escaping into someone else entirely. She begins to get into altercations with a rival dance troupe, posts scandalous images to her social media profile, and stabs a classmate with a pen when he makes a lewd gesture and calls her a derogatory term. Eventually, she has a falling out with her dance clique and, after Yasmine makes a comeback, is barred from performing with them at the upcoming dance contest.

The day of the dance contest coincides with the day of Amy’s father’s second wedding. But for Amy, this poses no conflict of interest; her mind is already made up: she will perform with her troupe. In her dance get-up, Amy sneaks out of her house and away from her aunt’s watchful eye. She waits for Yasmine to make her way to the contest. As she does so, Amy pushes her into a nearby lake. When Amy realizes that Yasmine can’t swim, she looks on in child-like horror, contemplating whether her dance routine and popularity are worth someone’s life. Eventually, Yasmine makes up Amy’s mind for her as she manages to latch onto a lifebuoy and hold on for dear life. Convinced that Yasmine will make it out alive, Amy takes off towards the dance contest. When they realize that Yasmine won’t be turning up, the rest of the Cuties’ have no recourse but to allow Amy to perform with them.

Mid-performance, Amy hallucinates the sound of her mother singing to her in her native language. Shocked, she freezes. As if struck by an epiphany, she sprints off the stage and towards her home. She arrives just as her mother is about to depart to attend her father’s second marriage. She pleads with her mother to publicly show her disapproval and forego the wedding. Her mother, kind as ever, advises Amy not to feel compelled to attend the wedding but stresses that she herself has no option but to fulfill her so-called duty as his first wife. She leaves to attend the wedding. Amy changes into casual age-appropriate clothes and wanders out of the building. She finds a group of girls skipping and joins them, skipping to her heart’s content.

Why does Amy leave her beloved dance competition?

From a young age, Amy has been forced to believe that her duties to her family come before herself. In brazen precociousness and obscenity, she finally feels a sense of freedom. But when Amy hears her mother’s singing as she performs, she comes to the realization that her mother’s and her own trials are not that different. She realizes that the salacious dance and promiscuity she looks to as a form of liberalization and expression of self, is actually just the opposite; it is, in fact, more alike the oppressive culture she has grown up with and her mother has lived with all her life.

Both cultures succeed in exploiting women and shattering their sense of self-worth. Knowing this, she feels all the more empathetic towards her mother and rushes to stop her from attending the wedding.

What does Amy’s skipping symbolize?

In cinematic tradition, coming-of-age is generally nothing more nor less than finding your own identity. Of course, it often fails to account for how ‘finding yourself” can change form and nature when coming into contact with different cultures.

Amy’s two worlds collide with one another, each with their unique rite of passage into adulthood. Amy’s familial culture dictates that she must come of age by devoting herself to her family and her future husband. Her new world looks to promiscuity as an indication of adulthood. The only thread connecting the two is that both cultures expect Amy to grow into herself before her time is due. Trapped between rites of passage that, one way or the other, objectify and degrade her, Amy finds herself driven to her wit’s end.

But, at last, Amy finds solace in the simple child-like pleasure of skipping, leaving behind the burdens of repressive traditions and the charade of precociousness. She finds her joie de vivre in simply being a child. She comes of age without giving up on her innocence.