Stephen King isn’t hailed the “king” of horror for short reasons. Each one of his works is terrifying, and yet, they have a magnetic pull to them, primarily owing to the characters he creates and the ingenious scares, even if textual, he unleashes at the reader. Even the short stories and novella he has penned would fare better than most of the horror fiction out there today, years later.

Adaptations, however, are tricky business. Even if a number of the best horror films of all time, including ‘The Shining’ have been through the course of King’s pen, not all of Stephen King’s works’ adaptations rank in the pantheon of great filmmaking achievements. Within that, on a scale ranging from ‘The Dark Tower’ to ‘The Shining’, if the ‘It’ movies would find their place somewhere near the upper end of that spectrum, ‘In The Tall Grass’ would be somewhere in the middle.

However, the intrigue is undeniable and chances are that if you saw the trailer, you would be drawn into the movie. Indubitably, if you saw the movie, you would have questions since the film, intentionally or otherwise, leaves a lot of it to the viewer’s imagination, Just as the short story it is based on. Without further ado, we thus deep dive into the explanation of its plot and ending. 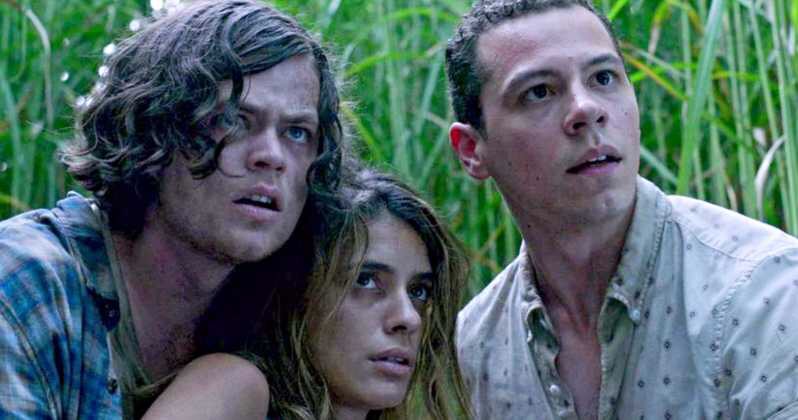 Six people lured into a field of tall grass at different points in time find themselves unable to escape as they repeatedly go through the same dead end situations and failed attempts to escape. Their only way out appears to be through a large black rock ‘planted’ in the middle of the field, like an oasis in a desert. The rock has carvings of human figures indulging in various activities, presumably to serve as an omen in what was to become of the people trapped inside.

While initially, the six, and Freddie, the Humboldt family’s dog are stranded alone, they somehow find their way back to each other and reunite after living through the same sequence of days and events, after many moons pass, which is also the reason why Tobin knew Becky was going to die. As stated, some of them reunite after being reanimated from their death, following the discovery that the tall grass didn’t move dead things. The time for which the siblings were trapped inside the wilderness is presumably two months, during which their absence incites Patrick to come find them. The Humboldt family, presumably even more.

After the six get together, Ross behaves strangely and insists that he knows the way out which the others could know too by touching the rock. Ofcourse, it is to be assumed that during this time, Ross stumbled upon the rock some time before, touched it, and seemingly got ‘possessed’ by whatever ominous force was controlling the endless fields. Ross coercing the others into touching the rock for “redemption” and “seeking a way out” is thus, by extension, the nefarious entity, calling out to the others to possess them too, its way of thriving.

In a lot of ways, the rock works exactly like the Deadlights in ‘It Chapter 2’, putting the victim in a state of trance, but in this case, they also do the perpetrator’s bidding, often by having things notoriously whispered in their ears. I am also assuming that the other victims, the people whose cars Becky and Cal spotted parked by the Church, became the people with the grass faces that terrorise Becky, now permanently residing inside the tall grass field, possessed by the black rock.

The group is initially persuaded by Ross to follow them, but after his wife Natalie confronts the group with the truth, stating that she saw Becky dead and that Ross tried to hurt her, coupled with them observing Ross obsessing over the black rock and its divinity, the group decide to part, ending in a tussle. Ross kills Natalie, while the trio and Tobin scape to a nearby abandoned bowling alley, with Ross on their trail.

Following some internal quarrels, Ross catches up to them, and in the ensuing struggle, kills Cal after showing him multiple of his dead bodies lying about in different stages of decay, implying that he had killed him before, multiple times. As Ross stated, “all choices that he made, led to him”, referring to him killing several previous versions of Cal, who all made some choice to evade that fate, but failed. Ross now pursues the remaining three, including his own son, who are all now separated.

First things first, it is pretty obvious that the rules of time and space do not apply to the fields with the tall grass. Sure, there are the diurnal cycles, with the sun setting and the sun rising, but the victims trapped inside: the siblings, the Humboldt family and Patrick, seem to be stuck in time loops that even defy death. The characters seem to be reanimated after dying as the night passes, seemingly stuck in an endless cycle, and bound to that, before they either give in or are brought to touch the cursed black stone by force, something that Ross was trying to do. Without a doubt, touching the stone, just as Ross did, would trap them inside forever but in submission, in servitude of the rock, and to lure in unassuming people as some sort of tribute, or sacrifice.

There are two ways that the field would lure people in. The first ofcourse is by running the people already stranded inside through infinite time loops, and echoing their cries for help to anybody passing through the road, near the church, just as Cal and Becky were. However, there has to be some origin, the very first person to have stepped inside the field and made contact with the rock. Unfortunately, both in the film and in the short story, this and the true mystery behind the rock, the vision itself that turned people, is something only King himself can perhaps answer.

Ross separately encounters Becky, who overpowers him by stabbing him in the eye and buys some time, eventually going into labour in front of the black rock. While Ross facilitates this, he is confronted by Travis, who with help from Becky is able to strangle Ross, killing him. He sees that the baby is gone, and Becky too seems to be struggling with life post the horror that transpired. Realising that the same cycle of events would repeat itself in the morning, and that Ross too would be animated, continuing to kill the remaining five until they gave in and joined hands with him, touching the rock ad serving it, Travis himself touches the rock, giving himself up to it.

Now seemingly aware of the secret of the rock, the mystic power inside it, and presumably the way out too, he allows Tobin to escape from the field, transporting him to the inside of the church by the side of the road in a manner that can only be explained by meta-physical means. But then again, perhaps everything here can. In doing so, he accepts his fate of staying inside the field forever, and either fighting Ross or serving the black rock. He hands Tobin the keys to Becky’s house, instructing him to stop her and Cal from entering the fields in the first place. Tobin then walks out of the church and convinces the duo not to step inside, lured by his own voice, and presenting the keys as proof and telling them about Travis.

Cal and Becky drive off with Tobin after being sufficiently convinced, as the film comes to a close. What Travis essentially did in his act of self-sacrifice was to break the cycle, allowing Becky and Cal to escape unaware of the predicament that awaited them, as the loop reset itself the next morning. The ending of the film differs from that of the novella in a big way, the latter ending with Cal and Tobin transfixed by the rock, taking Becky’s baby and throwing Becky at the black rock, with the character of Travis absent from the literary source. The story closes with a group of hippies parking their car by the church, and walking into the fields listening to Tobin’s cry for help, implying that the field had assimilated all the people it picked earlier, closing their loop of reanimation and death, luring new victims in.

Read More: In the Shadow of the Moon Ending, Explained