Review: Never Have I Ever Season 1 Episode 4 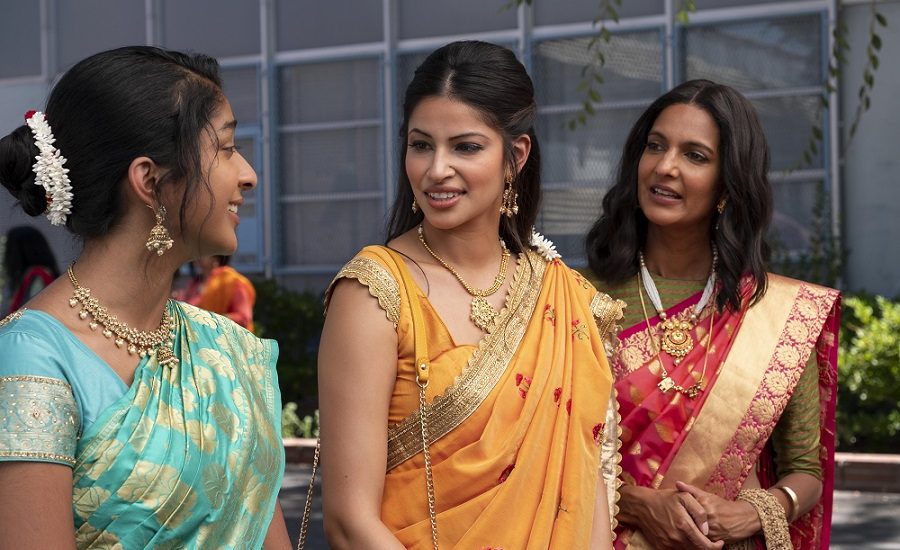 ‘Never Have I Ever’ delivers its funniest episode yet, simply because it is super Indian. From the complaining aunties to the pandit-ji who can read your mind- the episode has all the classics that every Indian can relate to, or at least every Indian Hindu can. The show uses this opportunity to point out the diverse cultures of the Indian subcontinent, which people often confuse to be the same. Apart from the perception of others for the Indian communities, it also focuses on the conflict of identity for Devi.

Never Have I Ever Episode 4 Recap

It is Ganesh Puja, and even though Devi is troubled by Paxton’s statement of labeling them friends, she has to put on a happy face and attend the function. She is a bit anxious to go back to the judge-y crowd of aunties, but so are her mother and her cousin. This is the first time since Mohan’s death and Devi’s paralysis that they are attending the puja. Nalini is worried that they might have to drown in the pity and condescension of these people.

On the other hand, Kamala is worried about how she will handle the tricky situation of her arranged marriage. There is also an opportunity that Devi needs to jump at if she wants to ensure her admission to Princeton. At the puja, Kamala comes across a woman who shows her the possibilities of the paths on whose crossroads she stands.

Never Have I Ever Episode 4 Review

Caught up in the middle of being too Indian and not being Indian enough makes Devi angry. She also tussles with her balance of how much Indian she actually wants to be. The pressure and desire to not blend in intensifies for teenagers. It makes them want to shed their roots and stick to the part that makes them one of the others. Devi, too, is pulled toward the part that doesn’t make her ashamed of her Indian-ness. Having the conversation with someone who has been through this thought-process and back makes her question this stand as well.

While Devi might not be so willing to accept her Indian-ness, the show welcomes it in this episode. Every scene of it screams Indian, and thus, makes it all the more entertaining. There are small things on every corner that make you nod your head, acknowledging the familiarity of that situation. When Devi, Kamala, and Nalini walk into the premises, Devi tells them not to look at the aunties. Kamala asking where not to look is utterly hilarious. The aunties in themselves are a piece of work. Their prayers that more acerbic than sympathetic, and their well-wishes that are more pointed than hopeful, are the things that every Indian-American, irrespective of whether they celebrate Ramadan or Ganesh Puja, will understand.

The sheer collection of shoes outside the place and Nalini asking her daughter to not waste her prayers on something as illogical as world peace are also the kind of details that the show indulges in. There is also the remark of the aunties about Nalini coloring her hair after her husband’s death is not an alien critique either. Then there is the pandit-ji, who eerily states that Kamala doesn’t want to get married, even when he doesn’t even know her, is not foreign either.

In the first episode, we came to know that Kamala’s parents have found someone for her. She doesn’t know him at all, but she should marry him because that’s the way things are. Not only does she not want to marry a man she has never met, but there is also the problem of being in love with someone else, someone her family will not accept so easily. She gives up on her love but then decides to stick with it. Even after that, she wonders if she can convince her parents in Steve’s favor. She gets her answer in the form of a woman who made a different choice and then regretted it. How will that influence Kamala’s life?