‘Never Rarely Sometimes Always’ (2020) is a movie of few words. Its meaning lies in what you read between its lines. The few dialogues that do exist serve a powerful purpose to ground it in harsh reality. Created and directed by Eliza Hittman, it is a film that has elements of universality in it. SPOILERS AHEAD.

The movie revolves around a 17-year-old Autumn (Sidney Flanigan) who is close to 18 weeks pregnant when she decides to get tested and get an abortion. The conservative and anti-abortion agenda of the first clinic she goes to forces her to find another alternative. In her journey through this process, there is a myriad of emotions she goes through with her cousin Skylar (Talia Ryder).

The movie begins with a school program in which Autumn sings the song, ‘He’s got the power’ by ‘The Exciters’. The song becomes a prelude to indicate that someone has got power over her to make her do things she doesn’t want to do. There are two instances where boys try to look her down by hinting at her being a ‘slut.’ This indicates that she regularly faces bullying and harassment in school.

She lives in a middle-class family with a demure mother and an ignorant father who plays tit for tat with Autumn. He is either smoking or drinking when showed and seems to be unappreciative of Autumn at all times just because she keeps to herself. He even calls the family dog a ‘slut’ because she is too easy to please. Autumn’s reaction to all this is a stoic expression that fluctuates very rarely throughout the whole film. There is a definite power hierarchy in the family and perhaps even her immediate neighborhood that compels her to keep to herself. 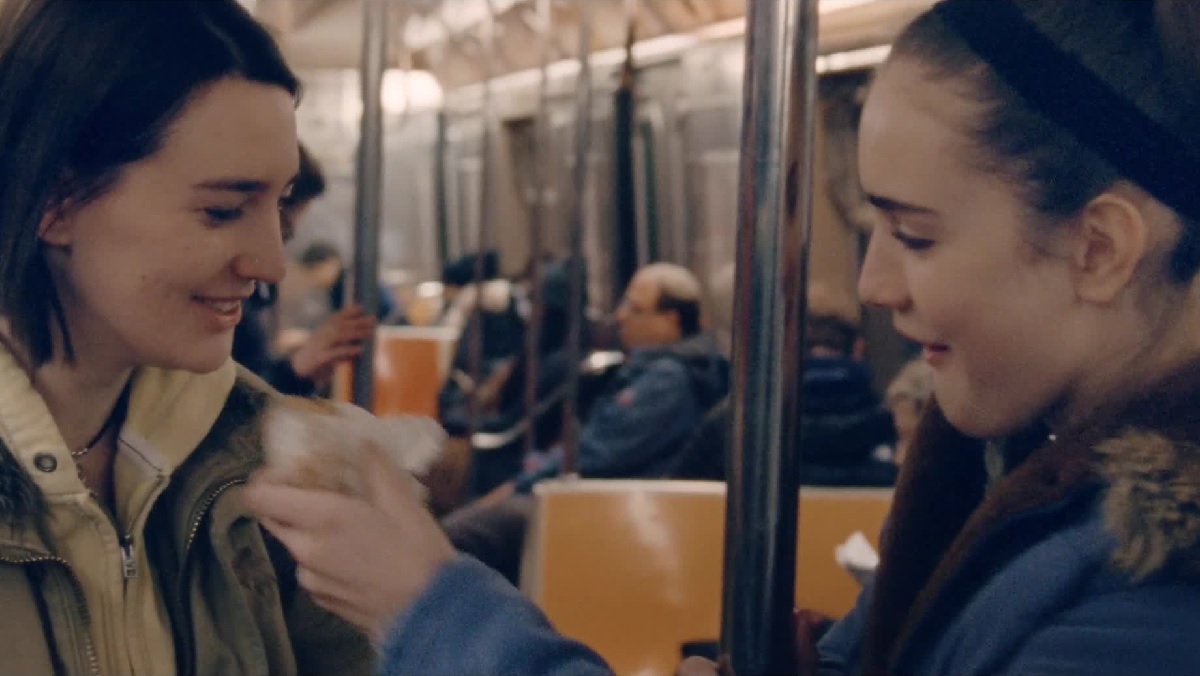 She is warmly received at the facility; she goes to get tested for pregnancy. Just when there is a possibility of someone being kind, the counselor plays an outdated video that discourages abortion. This is done to guilt trip Autumn into not following up with her choice of getting an abortion. While the counselor smiles and quotes that she is a mother, she still manipulates a 17-year-old to go through pregnancy, not knowing her background. This shows the ignorance, insensitivity, and lack of awareness of many medical practitioners and individuals.

This lack of empathy forces Autumn to check up on other options. As an outlet to vent her frustration, she pierces her nose with a safety pin. She does it unflinching. Now while the movie does not show Autumn to be a cutter, it seems to be an act of displacing her anger and frustration.

The abortion laws in her state mandate that she requires her guardian’s signature to get the procedure done. This makes her check up on self-induced abortion methods. She follows through with it trying to consume pills and repeatedly punching her stomach in an attempt to self-abort.

She gets a shoulder to lean on when her cousin Skylar gets to know about her pregnancy. She steals money from the supermarket counter they work at, book tickets for them, and accompanies Autumn to get the procedure done in Brooklyn with less hassle. The journey is a struggle with many subtle and yet important events on the way. All Skyler can do is offer her companionship. She also goes out of her way to help Autumn every step of the way.

The Ending: History of Sexual Abuse

The counselor in Manhattan, as part of the abortion procedure, asks Autumn a series of questions to which she is required to answer with ‘never,’ ‘rarely,’ ‘sometimes’ or ‘always.’ It’s the nature of this questionnaire and the breakthrough it results in, which explains the crux of the movie and its title.

At the beginning itself, the questions get too personal and uncomfortable for Autumn to answer. Later, as the questions continue, she breaks down into tears. This becomes the only instance in the entire film where she breaks down like that. The movie makes a conscious effort to abstain from being dramatic. All the questions are about her sexual partners. She admitted that some of her partners have refused to wear condoms, have sometimes even frightened or threatened her, though no one deliberately got her pregnant. If this isn’t bad enough, she is unable to answer two other important questions: if she has ever been hit or slapped, or if she was ever forced to have sex with someone.

The movie seems to hint at sexual predators at its every turn. It starts with the boys in the school who demeans her through sexual allegations. The cash in charge in the supermarket who kisses Autumn’s and Skylar’s hands every time they turn in the money from their cash registers. During travel, they meet a boy around their same age who forces his way into their life. He agrees to help them out but does so only after Skylar makes out with him. All Autumn can do is hold her hand as it happens. Their dire need for money puts them in that vulnerable position. Furthermore, there is a man on the subway who opens his fly when Autumn looks at him. The male gaze follows them around.

As she gets done with the procedure and the film edges towards its end, Autumn is finally able to fall asleep on the bus back home. It shows that till the very end, she is on survival mode. The exhaustion eventually creeps up on her when she is out of what she knew was a calamity for her. It is an indication she is feeling relieved after everything she had to endure, but she also knows that as a woman in a patriarchal society her struggles may not yet be over.