Will There be a The Equalizer 3?

There is a certain, undeniable charm about middle-aged stars finding their way back to their action roots. More so of retired secret agents being forced back into action, and putting their training from all those years to good use. While the Bonds and Jason Bournes of the world have always enjoyed their time in the limelight as secret agents, I would regard Liam Neeson at the helm of a movement that made retired agents springing back into action extremely alluring. More often than not, they are accompanied by a legendary status, a “very special skill set”, and an inimitable reputation in the field whence they retired. Yet still, there exists one idiot who is ballsy enough to ruffle enough feathers to bring them out of retirement and in action again; which is a good thing for us. Not so much for said idiot who ruffled said feathers.

‘Taken’, ‘John Wick’, and then Denzel Washington in ‘The Equalizer’ immortalised retired secret agents in my opinion, and more importantly, made them look immensely cool. While the former two have both completed their trilogies, from what we know, Robert McCall may not be too far away from completing his own. Following the success of ‘The Equalizer 2’, there have been talks of a third one, but still few in number and faint in trail. Read on to find out everything that we currently know of a third Equalizer film in development.

The Equalizer 3 Plot: What Can It Be About? 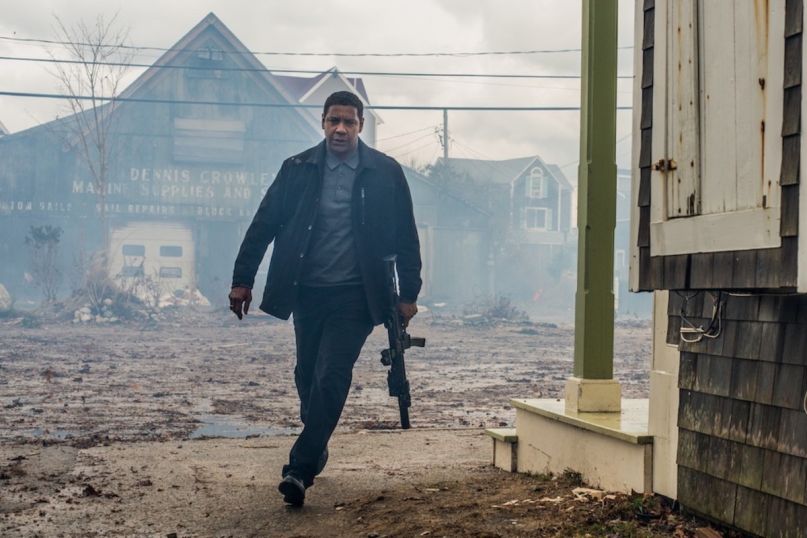 The first indication for a third Equalizer film happening comes from the success stories that the previous two films were, grossing nearly $190 Million each on roughly a third of that budget. However, this is one of the franchises where more than the commerce, there are a lot of other factors at play, the first and foremost being its titular star, Denzel Washington.

In his long and illustrious career, ‘The Equalizer 2’ is the one sequel that he has done, and any plans Sony may have of producing a threequel would squarely depend on the star of this action franchise. This is also what director Antoine Fuqua had to say about the possibility of a third, stating that while he himself would be very interested in going ahead with it, it would be Washington’s involvement that would actually be making it happen, stating “Yeah, absolutely. Personally, I’d love for it to happen. I mean the audience has spoken, so hopefully it’ll continue to do well in its life. Sony has brought it up and talked about it. It would be great to do it again. It would be great to do it again with Denzel. I’m looking forward to The Equalizer 3, if that happens. I would love for it to take place internationally, I think Denzel would be a great James Bond-type character. [Denzel and I] talk about a lot of different things. I’ve got some things I’m developing and roles I’d like him to play. Normally, that’s how it works with him. I’m dreaming him up as a cowboy or something, and then I’ve got to go pitch it.”

Here is hoping that a third Equalizer film doesn’t require that much of a “pitching” to begin with, seeing as though Washington too has stated on numerous incidents how he had a good time filming the (yet) duology. All in all, while a third Equalizer film looks very much on the charts, with most of the people involved in the previous two films characteristically on board, there may still be some waiting to do before we can receive an official confirmation.

The Equalizer 3 Cast: Who Can Be In It?

If it wasn’t clear from the previous paragraph, Denzel Washington is absolutely key to a third film happening in the first place, so needless to say, he would be headlining a potential third film. Ashton Sanders as Miles Whittaker, Orson Bean as Sam Rubinstein, Bill Pullman as Brian Plummer could also be touted for a return.

The Equalizer 3 Crew: Who Can Be Behind It?

Since Antoine Fuqua himself has expressed interest in returning for a threequel, he would be Sony’s best bet to bring on board to ensure the success of a third. He has also been a frequent collaborator with Denzel Washington, and it’s clear that the two share a camaraderie when it comes to working together, as a number of their films together including ‘Training Day’ for which Washington won the Best Actor award at the Academy, ‘The Magnificent Seven’, and ofcourse the two Equalizer films. Franchise writer Richard Wenk has also expressed his desire to do another Equalizer film.

The Equalizer 3 Release Date: When Can It Premiere?

The previous two Equalizer films had four years between them, and while there currently is no saying, neither an official word, I’d say if Sony doesn’t close the book on this (which is least likely that they will), I’d say a 2022 release date seems on the charts.

While we wait for an official announcement of the film, here’s the trailer of The Equalizer 2.