Everything We Know About It Chapter Two

If there is one genre with a widespread mainstream appeal that I believe has the ability to multiply its profits manifold on an extremely tight budget, it has to be horror. Most of the scares can be created with practical effects rather than VFX, and plus, I haven’t seen any of the A-listers starring in a grade-A horror flick, so that’s a serious budget cut right there. However, when a modern horror movie is just scary enough, the positive word of mouth spreads like wildfire and people turn up in unprecedented numbers.

‘It’ in that sense was special on more than a few counts. Made on a budget of $35 million, which I consider to be tight given it’s a studio backed, major adaptation of a famous Stephen King novel, the film ended up grossing more than 20 times its budget. Forget breaking even, which most modern day superhero movies have to worry about, WB through this film alone had enough money to produce a franchise to last another decade. To add to that, it wasn’t your typical horror movie either. When it was scary, especially with a scene stealing Bill Skarsgard as Pennywise the clown, it was terrifying, but when it decided to go easy, it was adorably nostalgic of the 80s and outrageously funny as well.

The success of the movie has prompted another sequel and turned the A-lister notion on its head, with a number of popular actors playing pivotal roles in the film, while the awesome kids from the ‘Losers’ club’ in the first also reprise their roles in the second chapter. The trailer for the film was recently released, and safe to say I am ready to be spooked a second time around. Read on to know everything we know about the sequel to one of the best mainstream films from 2017.

It Chapter 2 Plot: What is it about?

The makers have always envisioned this one as a continuation of the story of the first, rather than a traditional sequel. The eponymous horror novel by Stephen King too is divided into two parts, and according to the makers, the films were always intended to tell two stories in succession. The official synopsis from Warner Bros. and New Line Cinema states that “Because every 27 years, evil revisits the town of Derry, Maine, It Chapter Two brings the characters — who’ve long since gone their separate ways — back together as adults, nearly three decades after the events of the first film.” It is abundantly clear that the film will feature a significant time shift of 27 years and adult versions of The Losers’ Club, with the younger members appearing either in flashbacks or in parallel sequences. The second thing that is also abundantly clear is that Pennywise will return, and from the looks of it, we will have a glimpse into the history of the terrifying clown, from when he started working at a circus.

For the lack of a better word, the trailer for ‘It Chapter Two’ is amusingly terrifying, something that is truly unique for a horror film and was a definitive trademark of the first one, and has me significantly hooked on what happens when it comes out of hibernation again. I would like to see him full of vengeance this time around, more powerful, and even more whimsically terrifying.

The trailer of the film begins with Beverly Marsh (Jessica Chastain) returning to her childhood home where she encountered unspeakable horrors, and finds an elderly lady, Mrs. Kersh staying there. A majority of the nearly three minute trailer is spent inside the Marsh/Kersh house, while the rest of it quickly recounts in carefully constructed glimpses, the return of Pennywise, the reconciling of the Losers, and how they team up to fight a re-awakened Pennywise. Mrs. Kersh, while initially sweet and gentle, quickly unveils her demonic form, but not until two important revelations are made. The first, when Mrs. Kersh begins revealing her family history and tells Beverly that her father came to the country and joined the circus. Below is the photograph framed in her house, revealing his act as “the great Pennywise Dancing Clown”, with the devilish grin of the gentlemen pictured immediately revealing him to be Pennywise the clown. 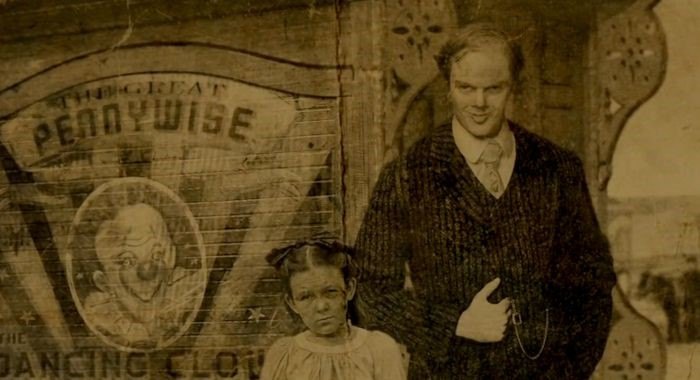 In that, the clown (or his ghost?) would be placed at approximately 100 years old in 2016, and Mrs. Kersh, his daughter, also presumably long dead, being like a demonic apparition of him. Another clue in the same direction is provided when Beverly spots rotten skin on her chest, implying that something was horribly wrong with that woman, before she stops being good old lady Kersh and becomes a horribly twisted ghost figure that attacks Beverly. Uneasy silences, quick cuts, and unsettling stares coupled with great camerawork. You already have me sold! Another interesting thing to note here would be when Beverly returns to her old home, it clearly still has the Marsh nameplate, and the voice that first answers the door while a shadowy Mrs. Kersh shows up is actually Pennywise’s. Creepy enough?

Where is the Losers’ Club now? 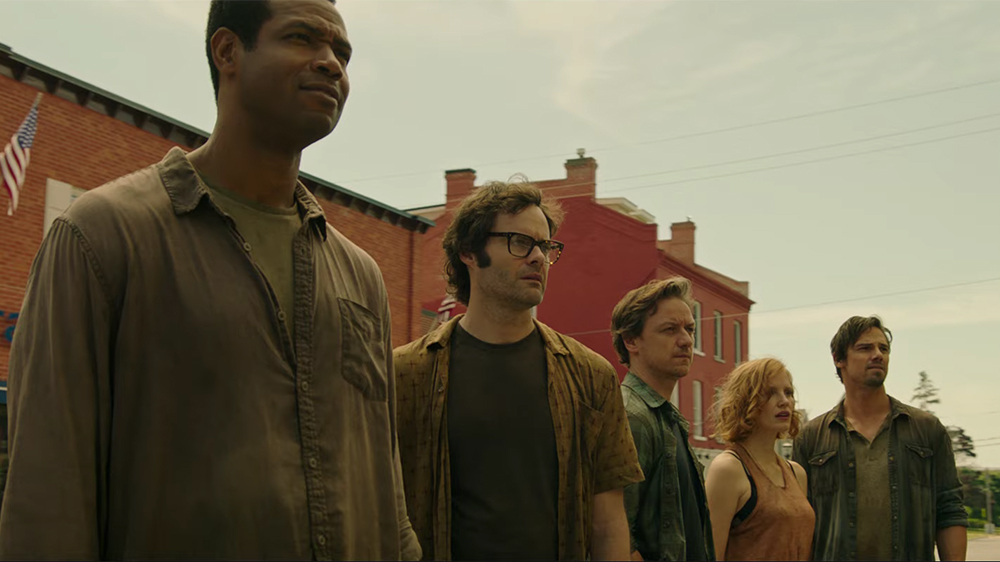 27 years after the events of the first film, their leader Bill Denbrough, to be played by James McAvoy in the film, is now a successful mystery novelist. Jessica Chastain will be playing adult Beverly Marsh, who as a child was physically and sexually assaulted by her father. She finds herself a successful fashion designer in Chicago, while at the same time being in an abusive marriage yet again. Ben Hanscom is now a successful Architect in Nebraska and was able to be free from obesity, being played by Jay Ryan.

The most outrageous one out of the lot, also the one with the best one-liners through the film, Richie Tozier, will be played by Bill Hader, and it couldn’t have been better. He too has moved out of Derry and is now a DJ in LA. Among all the members of the Losers’ Club, Mike Hanlon, played by Isaiah Mustafa, is the only one to have stayed back in Derry, now suffering from a serious case of substance abuse, being the one to re-summon the Losers’ Club when Pennywise resurfaces after 27 years.

The final two members of the club, Eddie Kaspbrack and Stan Uris, to be played by James Ransone and Andy Bean respectively, will also return, having moved on with their lives away from Derry after the group disperses. The one single aspect of the story that virtually everyone is sure about is that the Losers’ Club will reconvene in Derry when It emerges again after 27 years, just as Bill had sworn they would return. Their interactions with each other, the reunions and how the adult Losers’ Group will come together to take down Pennywise this time will take up a significant part of the movie.

As mentioned earlier, the cast of ‘It Chapter Two’ will feature bigger names as the adult versions of the kids in the Losers’ Club. To add to that, apart from the adults, the kids will return to reprise their respective roles from the previous one, and the story will proceed with either flashbacks or quick back and forths between the past and the present. James McAvoy, Jessica Chastain, Bill Hader, Jay Ryan, Isaiah Mustafa, James Ransone and Andy Bean star as the adult Losers’ Club members, back on the hunt for Pennywise again, while Jaeden Lieberher, Sophia Lillis, Jeremy Ray Taylor, Finn Wolfhard, Chosen Jacobs, Jack Dylan Grazer, and Wyatt Olef return as the original, younger losers.

Apart from the heroes, a stellar Bill Skarsgard will be returning to his now iconic role of Pennywise the Clown, a deliciously terrifying antagonist and one of the better ones among current horror movies. Jackson Robert Scott will be returning as Georgie and Joan Gregson will appear as Mrs. Kersh, albeit both will be apparitions or forms of It. Apart from the primary characters, Teach Grant, Jess Weixler, Will Beinbrink, Xavier Dolan, Taylor Frey, Jake Weary, Erik Junnola, Connor Smith, and Javier Botet will be appearing in important supporting roles.

It Chapter 2 Crew: Who is Behind It?

Director Andy Muschietti along with his wife Barbara Muschietti will be returning for the sequel as director and producer of the second chapter respectively, along with Da Lin and Roy Lee returning as producers too. The first one had some major writing talent at its helm, including Gary Dauberman, Chase Palmer, and especially Cary Fukunaga. However, the second one will only have Dauberman returning for penning the screenplay. New Line Cinema would be the major banner bearers of the film along with Warner Bros. distributing, as with the first ‘It’.

It Chapter 2 Release Date: When will it premiere? 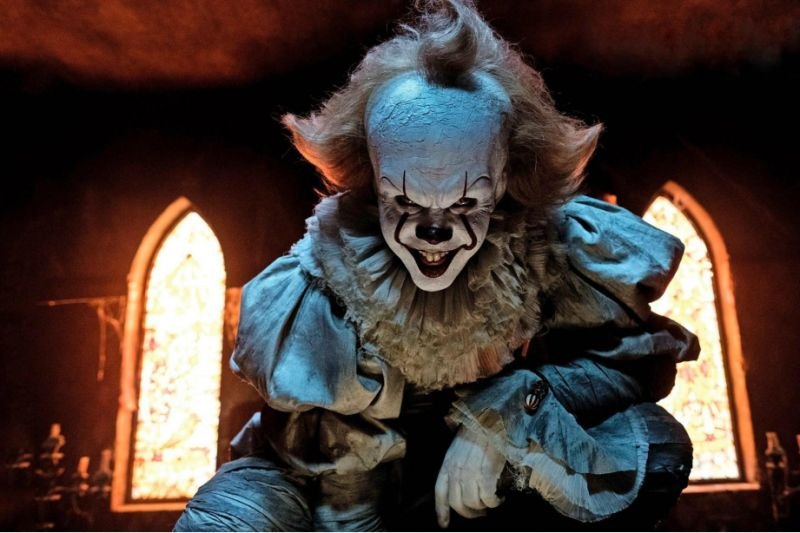