Jurassic World 3: Everything We Know So Far

The money machinery and the nostalgia engine of the world run in such a way that the two Jurassic World movies reprised from the original trilogy that ended with a disappointing third film have grossed over $2.8 Billion worldwide, combined, something that would have been a dream run even for Steven Spielberg’s 1993 original. In fact, both stand among the top 15 highest grossing films of all time.

The thing that I find funny here is that none of the two new movies have received the acclaim or the universal love that Spielberg’s original and even ‘Lost World’ received, with many criticising the need of the sequels in the first place, and the audience claiming that the franchise had run its course, and anything beyond the third was a cash grab, which it probably was. Yet still, every time there is even news of a new Jurassic movie, fans and audiences across the world alike have their radars blipping in excitement, resulting in pretty unprecedented turnouts and footfalls at theatres when they actually hit. The reason? Dinosaurs, simple.

With his ’93 original, Spielberg unlocked something that probably even he didn’t know appealed to our sense of amazement more than outer space, superheroes, and even fairy tales, as the box office figures would suggest: Genetically recreated, and later, genetically modified dinosaurs, existing in our world, interacting with us. It was almost as if through the eponymous novel, Spielberg catered to a deep-seated wish seeking fulfillment within us. And 26 years on, here we are, discussing when the next one is going to come out, after the fifth one just broke records in ticket sales last year. Well, there have been quite some developments, and we list them all down here as everything we know yet about the sixth film in the franchise, or the third in the quasi-rebooted ‘Jurassic World’ franchise. Read on.

Jurassic World 3 Plot: What Is It About?

Usually, I would go ranting about the ending of the second movie that would give us the most possible direction that the third ‘Jurassic World’ movie could take, beforehand. But in this case, we have been blessed by an 8 minute official short film from the makers of the film themselves, called ‘Battle at Big Rock’, and those eight minutes are the only thing to see to know everything that you can expect, at least from the first half of the film.

Needless to say, it does tie into the end of the second film wherein the dinosaurs held captive from Isla Nublar at the Lockwood estate are freed by Maisie, escaping the estate grounds and roaming free into the world; but it depicts that some time has passed since then, and the appearance of dinosaurs amidst human milieu is a little more normalised, if I am to call it that, than it would have been had dinosaurs just broken into our world.

Dr. Ian Malcolm, too, played by the effervescent Jeff Goldblum, ended the second film on an anticipatory note, announcing the arrival of a “neo-Jurassic” age wherein humans and dinosaurs would need to co-exist together, as the visuals showing the freed dinosaurs roaming about jungles and suburbs cut into his speech. There is more on that in the short film, so let’s discuss that at length. 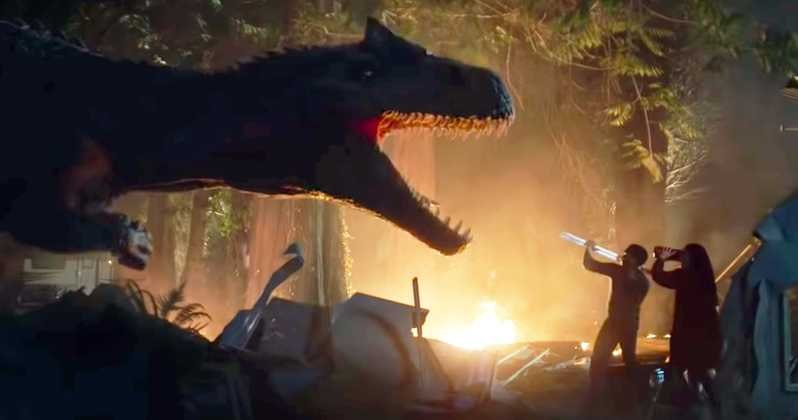 Directed by Colin Trevorrow, this eight minute short film set in the same universe as the Jurassic World films and roughly a year after the events of the last one, ‘Fallen Kingdom’, opening with a family camping at the same location as in the title. Their night out and family banter is broken when they are inside the trailer, and a Nasutoceratops appears looking for food, accompanied by his/her parent. The family is relieved knowing they are only herbivores, but as is the nature of the Jurassic films, an Allosaurus too follows up quickly.

However, the really interesting part is shown during the credits of the short, when dinosaurs are inserted into seemingly normal, human situations, showing what a “neo-Jurassic age” would be like, where humans and dinosaurs co-exist, involving a scene where a wild triceratops appears on a road causing an accident, a Mososaur engulfing a whole shark, a Pteranodon flying away and taking a dove that a newly-wed couple released into the air, and a little girl at a farm terrorized by a trio of compsognathus’.

Life, uh, does find a way Dr. Malcolm. If this is any sign, ‘Jurassic World 3’ is already looking to be a lot of fun, and may just be able to take off the now infamous tag of “unnecessary” films that its prequels have been carrying. Although the question of these dinosaurs surviving and reproducing while the military that’s usually quick to react in such situations doing nothing all this time still remains.

Despite the ending of the second film leaving us overrun with dinosaurs, Trevorrow was opposed to the idea of dinosaurs going berserk and attacking cities, and insisted on treating them as wild animals in the next film, and the humans’ reaction to them, just as such, stating “I think any kind of global acceptance that [dinosaurs] are just around doesn’t feel real to me because, even now when you think of animals, when was the last time you saw a tiger walking down the street? We know there are tigers. We know they’re out there. But to me, it’s very important that we keep this grounded in the context of our relationship with wild animals today.”

To add to that, he said it would be a world where “a dinosaur might run out in front of your car on a foggy backroad, or invade your campground looking for food. A world where dinosaur interaction is unlikely but possible—the same way we watch out for bears or sharks.”

Trevorrow followed it up with other confirmations on the sequel including news of the film focusing on real dinosaurs once again, as opposed to the hybrid ones, and that Bryce Dallas Howard’s character, Claire Dearing, would be the one to grow the most over the course of the trilogy.

Jurassic World 3 Cast: Who Is In It? Both Chris Pratt and Bryce Dallas Howard are set to reprise their roles from the two films for a third one. Joining them would be Justice Smith as Franklin Webb, Daniella Pineda as Zia Rodriguez, and Isabella Sermon as Maisie Lockwood, the clone from ‘Fallen Kingdom’ who I feel will have a key role to play in the third. I am also counting on Jeff Goldblum as Dr. Ian Malcolm too to show up one last time for the series, even if it’s in a cameo capacity as with ‘Fallen Kingdom’.

Jurassic World 3 Crew: Who Is Behind It? 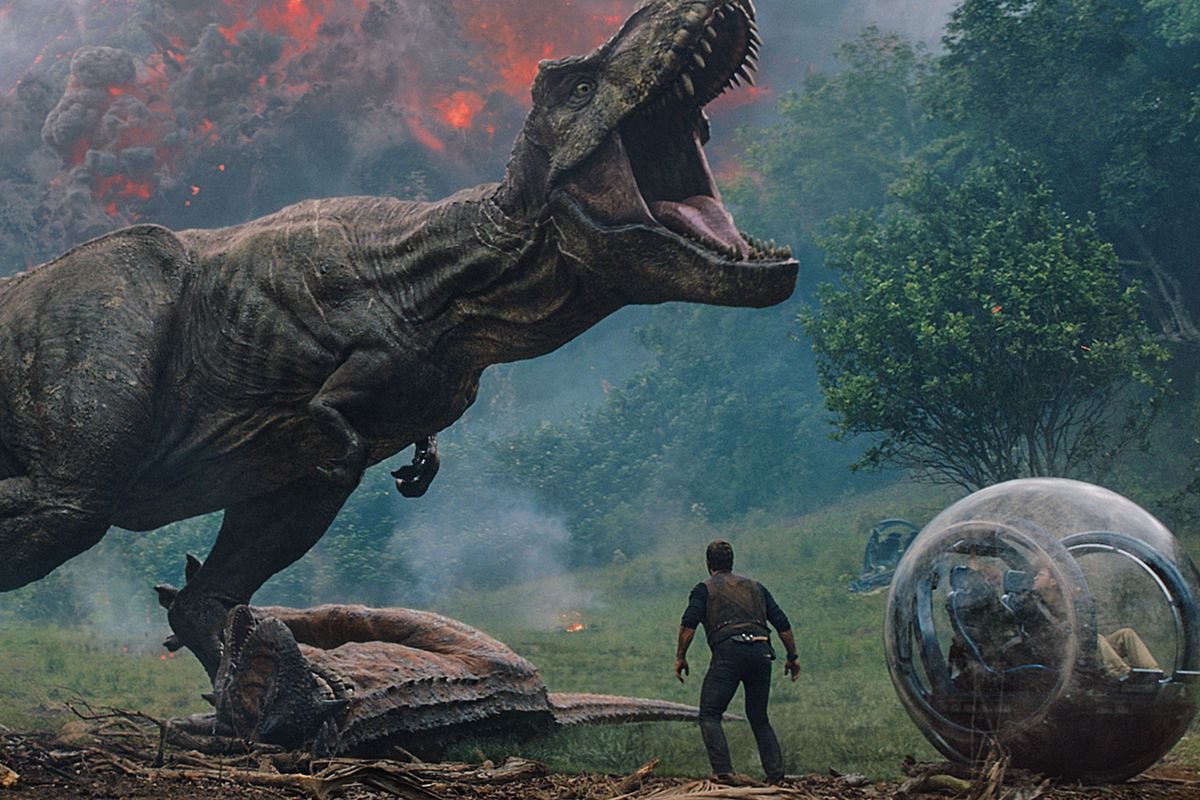 Colin Trevorrow from the first film will be returning to direct the finale of a supposed trilogy in the new Jurassic films, reportedly on Steven Spielberg’s special request, who will also be executive-producing the film. Trevorrow will also be penning the script and screenplay along with Emily Carmichael. The film will be released worldwide by Universal films.

Jurassic World 3 Release Date: When Will It Premiere? 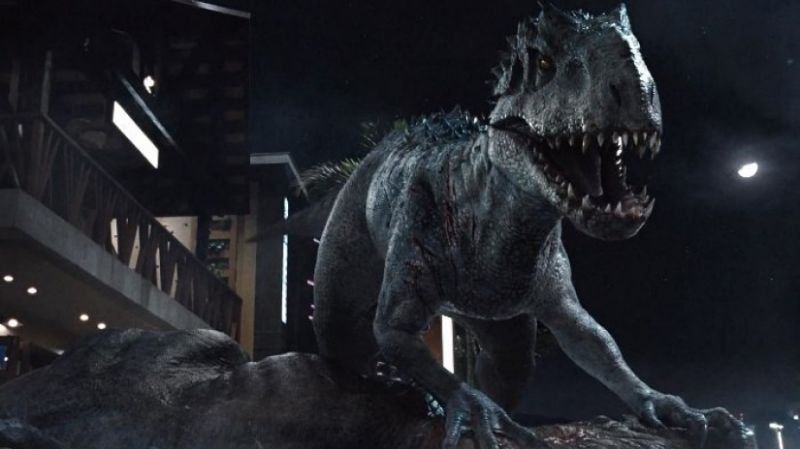 Jurassic World 3 is all set for a June 11, 2021 release. Shooting for the film is expected to be underway at the Pinewood Studios by early 2020.

While there is no trailer, you can check out the short film that I talked about earlier in the article, ‘Battle at Big Rock’, which serves as an extended trailer in itself. We will, however, update this section with a trailer as soon as it arrives. That said, we shouldn’t be expecting anything before late next year, seeing as though shooting has barely begun on this one, as the footage from the short would suggest.