Will There be a Mission Impossible 7? 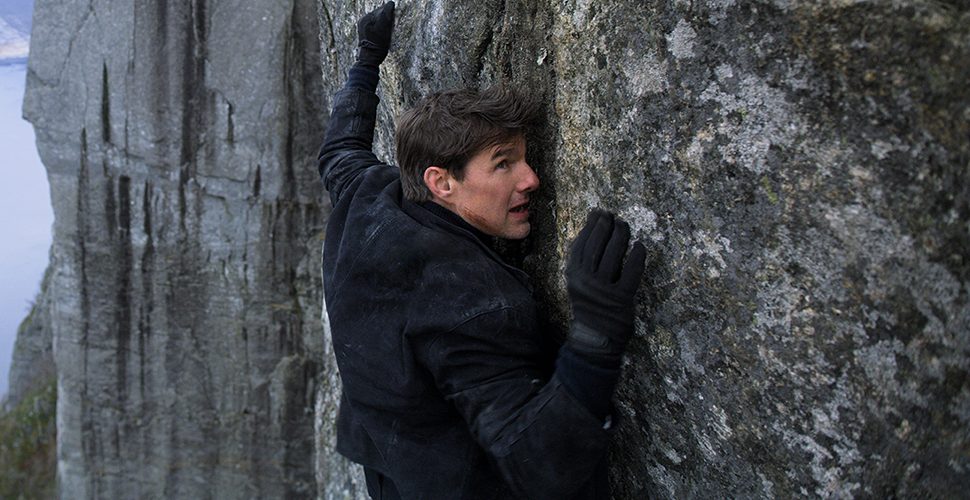 I ended my 2018 review of the massive blockbuster that was ‘MI: Fallout’ on an immensely positive note, stating that if Mr. Cruise could continue having that elixir of youth and upping the ante in every subsequent installment, this beloved series was not going anywhere. The movie gods smiled upon us that day and within weeks of the film’s release, two subsequent sequels for the film, Mission Impossible 7 and 8, were announced, reportedly being shot back to back and due for release within a year’s gap, much like MCU’s concluding saga ‘Infinity War’ and ‘Endgame’ and even the upcoming ‘Fast and Furious’ films.

While this one isn’t necessarily the last of the saga for Ethan Hunt, the end of the line still seems pretty much in sight, unless Cruise continues to surprise us the way he always has. Both the films are still pretty early in development stages, but the massive success that ‘Fallout’ proved to be, with the best critical score of all MI films and the highest collection figures in the franchise, we are sure that the next MI films are clearly the studios’ number one priorities. That being said, here is everything that we currently know of the franchise’s seventh outing. Read on.

Mission Impossible 7 Plot: What Is It About? 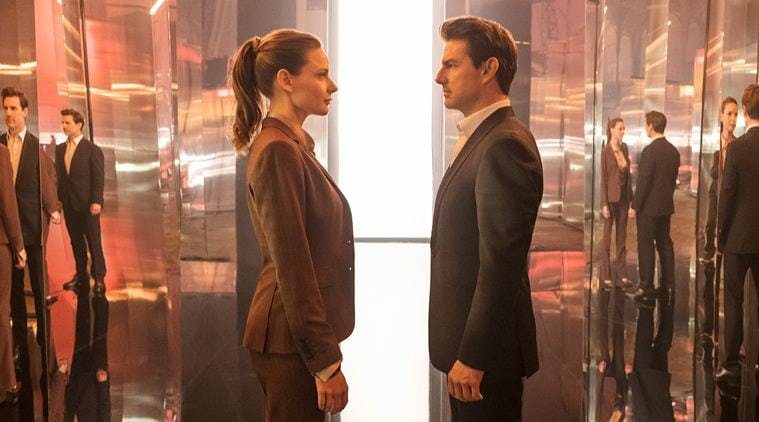 Your mission should you choose to accept it, is to decode the plot of the upcoming Mission Impossible films, said the editor, and I took it only to land myself in quite some pickle. There is remarkably low information on what the plot of the next MI film looks like. The villain from the last film, August Walker, played by the ever charismatic Henry Cavill, has close to zero chances of returning, unless the franchise’s idea of surprise was to introduce zombies, because the last time I checked, August Walker has a winch hook in his face, and that’s pretty difficult to recover from, especially for a zombie.

The same, however, cannot be said for the franchise’s now recurring villain, Solomon Lane, who despite threatening the world twice now, has still been detained by the MI6, and we all know that it would take all of the next film’s opening 10 minutes and an elaborate chase to bust him out. I am still guessing that if he returns, it would be in the capacity of a secondary antagonist and not the main one. In all probability, MI7 will have a new villain.

The franchise has come a long way from Cruise’s slow-mo bangs and leather jacket in the second, to more nuanced and brutal combat, and higher stake stunts, before finally realising for good that the one thing that differentiated this franchise from the other spy-action films out there (looking at you, James Bond!) was its leading man, and the one thing that kept the people coming back for more was to see how far the franchise’s 57-year-old actor was willing to push himself, and what new extremes he would scale. We are an evil lot of audiences, we are! Dangerously so, expect the sequel to have nearly the same stunt structure at least, something that’s clearly worked for the franchise post ‘Ghost Protocol’.

Sure, the next MI film isn’t the next Christopher Nolan film wherein the plot would be kept under tight wraps until a few weeks before the release of the film; but we are still awfully low on information, except for old tropes being repeated: a grizzled villain, or a megalomaniacal one, hell bent on destroying either the world, or Hunt, or both. Throw in a couple of nuclear threats, continent hopping, and most importantly, as much Cruise as you can. Et Voila! 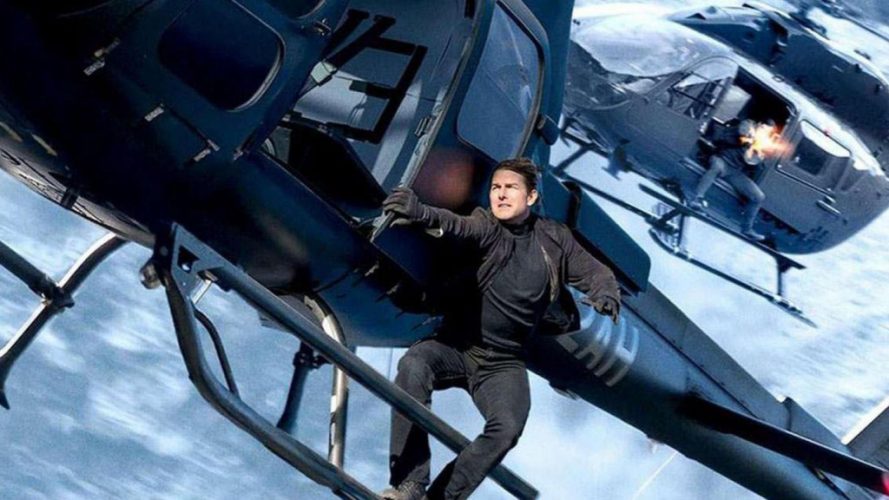 In a lot of ways, I would state that ‘Fallout’ changed things, just as ‘Ghost Protocol’ did with Cruise’s Burj Khalifa scaling stunt, reinstating just how important it is for these films to reinvent themselves every few years. It was obviously going to be hard to match up to that, so ‘Rogue Nation’ brought in Cruise dangling from the side of a plane door. But I felt that this scene occurring in the beginning of the film with virtually no consequences after it, and the absence of a “central stunt” made ‘Rogue Nation’ feel a bit underwhelming.

‘Fallout’ then more than made up for it, since not only did its central poster stunt, Cruise riding a helicopter (and dangling from it, of course), delivered in aces and was the most adrenaline my body produced in a theatre in a long time, it was also dotted by a number of other stunts and action set pieces (the HALO jump, the toilet brawl, the building rooftop chase, and the bike stunt in Paris) that made the film simply non-stop fun.

Along similar lines, the director of the film, Christopher McQuarrie has stated that Cruise has some pretty big ideas for the film lined up, or as he said and I quote, “world-topping sh*t”. There was even talk of sending Ethan Hunt to space in response to what next could the team do that would be bigger than the last time, to which McQuarrie responded: “That would be entirely up to SpaceX or NASA. They would have to be involved with that, I would imagine. Or Paramount Pictures. I don’t know how much they want to invest.” That would be something to see now, wouldn’t it?

Mission Impossible 7 Cast: Who Is In It? 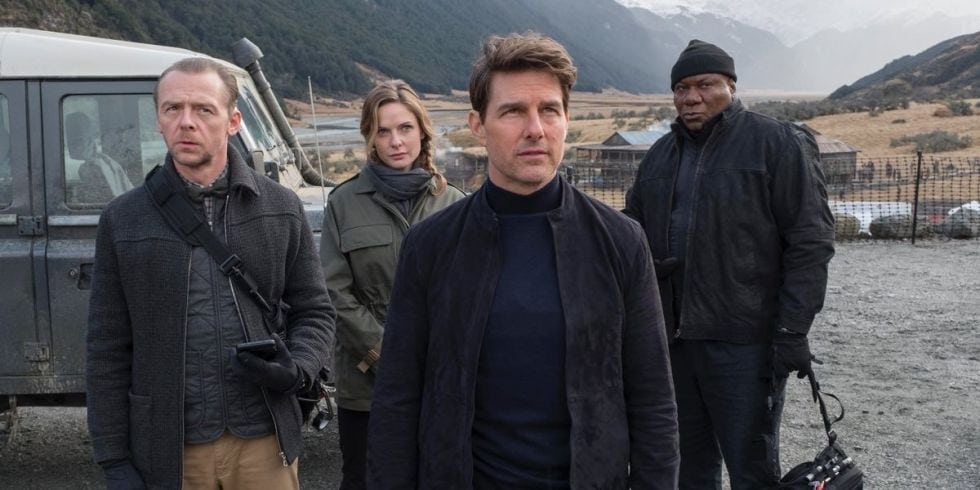 This is easily the most interesting section out here. Cruise is the face of the franchise, and would obviously return in his globally iconic role of Ethan Hunt. Without him performing the stunts that he does, the franchise would lose half its money, and without him, it wouldn’t exist. Ving Rhames and Simon Pegg too would be returning as Hunt’s aides Luther and Benji, and I can already tell that one of either of the two’s best lines from the film would be “Where’s Ethan”, while Ethan would be prepping for some “world topping sh*t”.

Rebecca Ferguson, who is now a series regular, has also been confirmed to return in her role of Ilsa Faust. Despite being the antagonist in the last film, I think Henry Cavill is done with the franchise for now, since it was impossible to escape his predicament in the last film. The story with Sean Harris as Solomon Lane though is quite different. He is already the only villain in the franchise to have returned, and yet still, has been detained again at the end of ‘Fallout’. A fair buck says that he too may mount a return, but only in a secondary capacity. The franchise wouldn’t risk the same villain for a third outing. Among the newcomers, Hayley Atwell has been confirmed to have been cast in the role of an agent for both films.

A member of the squad who I thoroughly missed in ‘Fallout’ would be Jeremy Renner’s William Brandt. The actor couldn’t commit to the film owing to his Hawkeye role with the MCU. I sincerely hope that he returns with this one. Apart from these, Vanessa Kirby as Alanna Mitsopolis, Angela Bassett as Erica Sloane, Michelle Monaghan as Julia Meade may or may not return. Their future with the franchise lies in the balance as of now.

Mission Impossible 7 Crew: Who Is Behind It?

Christopher McQuarrie, a frequent collaborator with Tom Cruise on the series and various other projects including Cruise’s ‘Jack Reacher’ films, will be returning to direct and script the two sequels planned back to back. This came as a surprise since after the successful release of ‘Fallout’, McQuarrie swore off the MI films, feeling that he had reached his creative limit with the franchise, setting the bar as high as he possibly could. McQuarrie became the only director to be returning to the franchise with ‘Fallout’, and by the time the eighth film will be done, McQuarrie would also be among the few directors in the world to have helmed a significant portion of the franchise, along with David Yates from J.K. Rowling’s Wizarding World and the Harry Potter films. “It was an overwhelming concept when we finished the movie and now with the response, it’s even more overwhelming and scary. I would definitely need time to process that idea”, said McQuarrie, when asked about the seventh movie and his return to the franchise.

In all probability, he would be producing the film too, along with Cruise, J.J. Abrams for Bad Robot productions and Skydance Media along with Paramount, who have been behind the most successful entries of the franchise, from ‘Ghost Protocol’ till the last one.

Mission Impossible 7 Release Date: When Will It Premiere?

‘Mission Impossible 7’ has been booked for a release date of July 23, 2021, roughly three years after ‘Fallout’ hit theatres. Although this write-up doesn’t directly allude to it, the eighth Mission Impossible film too is scheduled to hit theatres roughly a year after that, on August 5, 2022. There sure is going to be some stiff competition from other summer releases, but the cusp of summer every three years or so has been reserved for the MI films. After the last one and a dismal half-year in 2019 barring a few, it’s the summer movies that should be concerned.