The hallmark of modern India’s democratic ethos is a mega event which ignites universal pride and fervor – a nationally unifying, once-in-five-years election in which eligible voters from a population of over 1.2 billion exercise their right to choose their leaders. The EVM (Electronic Voting Machine) obscured behind a quaint cardboard cutout, a common feature in any polling booth, has almost symbolic heft as an instrument bridging India’s mind-boggling diversity – political as well as socio-cultural. Amit Masurkar’s (the mind behind 2013’s jaunty indie Sulemani Keeda) incisive, self-aware and occasionally quirky new drama pierces the mythical veil behind the “world record worthy” phenomenon whose prolific rigor extends all the way from the cold deserts of Ladakh to the marshy hills of the North-East. His film fearlessly explores many of the unsung tribulations and modest triumphs behind every vote collected, even in not-so-conducive environments. The film, always refraining from hasty conclusions, profoundly argues that the faceless system, known to exude an almost robotic diligence, is only as virtuous, reasonable and effective as the humans who implement it.

Masurkar’s film has much to say about the machinery at the core of Indian electoral process, what irons out its limitations as well as fosters its in-the-nick-of-time efficacy. Along with co-writer Mayank Tewari, he avoids heavy-handed social commentary by infusing an astutely critical yet impartial narrative with surprisingly nimble wit. At the center of the drama lies the ideally progressive, vociferously opinionated Nutan Kumar, a man who rechristens himself as ‘Newton’, after the historical figure whose discoveries drastically transformed the world. Essayed with remarkable artistry by Rajkummar Rao, Nutan’s dogged endurance in being the change he seeks is matched only by his pedantic and testy opposition to everything lax and desultory – whether it is an unlawful marriage or the faulty implementation of rules. His traits hardly let him breathe easy in a world as hostile as it is contradictory, even if it means unabashedly opposing his father. A major admonishment at work comes in the garb of advice from a superior (a subtly quirky Sanjai Mishra) when he attends election seminars, yet he remains unfazed. Soon assigned as a presiding officer to conduct elections in one of the most fractious regions of Chattisgarh, he arrives in the wilderness with an ennobled sense of performing his duty to the last letter. 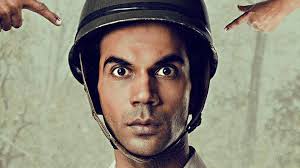 Thrust into a volatile region which refuses to conform to his sphere of influence, Newton’s ideological visage encounters its obverse in the caustic, fatalist world-weariness of security officer Atma Singh (Pankaj Tripathi in top form). Assigned to ensure law and order while elections are conducted in the Naxal-affected region by Newton and his team, Singh routinely calls him out for his lack of exposure to life-threatening violence the former survives on a daily basis. Staunchly believing that the official keywords of “free” and “fair” are oblivious to the ground reality he and his men wade through, Singh shrewdly claims to have no personal animosity with Newton, even when he is most blunt and unforgiving. The film cleverly posits these contentious personalities as two different perspectives, neither being absolute in their assertions. Rao and Tripathi never reduce their characters to petty caricatures, effortlessly lifting most of the film on their shoulders. The former’s indignations over discarding official protocol and the latter’s concerns about misdirected obstinacy reveal a more compelling portrait of what it takes to work around adversity or simply maintain status quo.

Newton’s own team member, the jovial and carefree Loknath (an outstanding Raghuvir Yadav) attempts to do away with solemnity, implicitly finding cheeky and incredulous ways to pass the time. Officer Singh’s juniors too have their own absurd ways of insulating themselves from the bleakness of their job – they concoct devious financial schemes, over indulge in local cuisine (Laal Salad instead of the dreaded salute) and bully tribal boys in the vicinity. The only person towards whom Newton displays some affinity is the pragmatic localite Malko (Anjali Patil). Forthright, empathetic yet never cosseting, she is the only individual who affords Newton an unbiased opportunity to explore the insurmountable fragility of their milieu on his own terms.

Masurkar’s film greatly differs from convention in that it does not shy from revealing its central character’s inadequacies. Newton is no hero and his vulnerabilities are as daunting as the tasks he is entrusted with. The jungle extends in all corners the eyes can see while an abandoned, dusty school’s walls in a clearing bear the lethal warnings of armed factions. The villagers’ lives, shown in hand-held close-ups, exist in near-isolation, away from the pangs of urbanism. Yet their dignity is tragically malleable in the hands of exacting administration officials as well as merciless insurgents. It is only when Newton finds himself to be completely at odds with the very people he is supposed to serve that his ironclad sense of right and wrong suffers a heavy blow. Not giving in to theatrics, Rao poignantly depicts the emotional implosion of a man who is out of his depths in a place which disregards most of his irrevocable notions.

The arrival of the media along with a senior police officer also do little to alleviate his situation for they are there for contrived sound bytes and the officer is more than happy to indulge them. All the while, Newton’s raging dilemmas are made evident by cinematographer Swapnil Sonawane even in quieter moments by placing him right in the midst of a desolate tribal village, employing close-ups to peer at the titular character’s unrest and long shots to contrast his state with the incomprehensible surroundings. Editor Shweta Venkat ensures smooth transition and pacing even when multiple characters crowd the frame. However, the music adds little to the intensity of the drama even when an acoustic track attempts to evoke pain and empathy, seeming instead as something to be simply acknowledged in the stark socio-realist setting.

With a climax as ludicrous as it is bittersweet, Newton, the film, turns the notion of “picking up the gun” on itself –  an oft used metaphor for extremely radicalized youth around the globe. In the process, it questions major concepts of bravery, motivation, duty and unbounded tenacity. Making us wonder about the underlying cost of each action, much like the eponymous Third Law of Motion, it also embraces the vagaries of human nature. In the process, a complex truth is realized. The forces of change do not always align with the desire to do good, but in the attempt itself there may lie the key to understand the smoldering cauldron of extremes that is India.