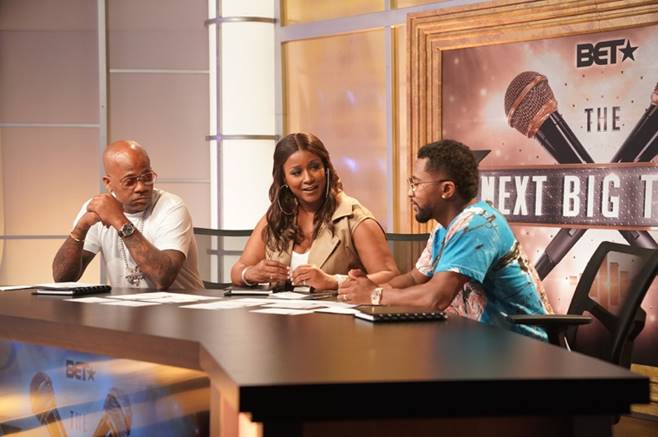 Ever since the launch of ‘American Idol‘ in 2002, multiple reality TV shows, based on the same concept, have been vying for attention, with varying degrees of success, and an aim to be labeled as the next big thing in music. Another title in this never ending list is ‘The Next Big Thing’, BET’s foray into the vast repertoire of talented musicians. The show is a singing contest that puts 21 aspiring R&B and hip-hop artists through a grueling artist development boot camp, exclusively curated to groom the next superstar. Co-produced by a powerful trio of African-American female bosses, Rikki Hughes, Holly Carter, and Tina Davis, the show was first announced in April 2019.

The Next Big Thing Cast: Who is in it?

‘The Next Big Thing’ features a judges panel comprising Tina Davis (Chris Brown’s former manager), Grammy-winning producer Zaytoven and Roc-A-Fella Records co-founder Damon Dash. Davis, the founder of Phase Too, Inc., has held prominent positions at Def Jam and Empire. She is the primary on-screen show-lead, who works alongside Zaytoven to guide the up-and-coming artists. Xavier Lamar Dotson, aka Zaytoven, is a renowned keyboardist and a record producer who has collaborated with some of the top names, including Usher, Future, Gucci Mane, Waka Flocka Flame, Lecrae, Young Scooter, Young Dolph, and Shy Glizzy. Record executive, film producer, director and actor Dash is primarily known for co-founding Roc-A-Fella along with Jay-Z and Kareem “Biggs” Burke.

The host and the three judges are expected to return for season 2, if and when it happens.

The Next Big Thing Plot: What is it about?

‘The Next Big Thing’ features 21 shortlisted and exceptionally talented hip-hop and R&B artists from across the country. They are pitted against each other in a demanding boot camp where the contestants need to compete every week in a line-up of the toughest survival-of-the-fittest challenges. The final showdown between the last two finalists gives the winner a one-in-a-million chance to secure a record deal on the spot from A&R executives — Serge Durand (Capitol Records), Erika Coulter (Epic Records), Tuo Clark (Def Jam Records), and CEO Ghazi (EMPIRE Records). As per Dame Dash, “We have reinvented the stale singing competition show for our audience.” Tina Davis added that this approach is a first of its kind and has been implemented on a massive scale. The finale comes with the option to transform someone’s life.

‘The Next Big Thing’ also adopts a novel concept. It is mainly aimed for skilled yet undiscovered artists who do not have the means to access the best vocal coaches, trainers, choreographers, writers, producers, and glam squads. Hence, they struggle a lot in order to take their career to the next level. And if someone wants to reach the top, he or she has to train himself or herself to compete against the biggest names in the industry. It is proper development and grooming that separate the good artists from the best. With a platform that offers the chance to compete with yourself, this is an ideal opportunity for talents to be recognized and appreciated by the masses.

The Next Big Thing Season 2 Release Date: When will it premiere?

‘The Next Big Thing’ Season 1 released on BET on July 9, 2019 and came to an end after 10 episodes. After so many TV franchises that have been instrumental towards discovering music artists who progressed to become major international stars, there is no doubt that the show’s focus on R&B holds promise.

Now as far as the next season goes, we don’t have an official announcement yet. But if renewed, our best guess is that ‘The Next Big Thing’ Season 2 release date could be sometime in July 2020. We will update this section as soon as we hear more.

The Next Big Thing Trailer:

Below is the official trailer of ‘The Next Big Thing’ Season 1. You can also head to their official site if you wish to check out previous episodes and clips from the show.