Nisekoi follows the adventures of high school students Raku, Shuei, Gumi and Chitoge. The anime by Viz Media was originally released in Japan before being dubbed for the international audience under the name Nisekoi: False Love. It gained a massive fan following among those who love romance anime, and it is definitely one of the best light-hearted shows you can pick up if you want to get into anime. The anime was adapted from the manga of the same name, and there are three seasons of fun episodes out there if you want to check out. The visual design and the music pull people into the anime almost immediately, but there is so much more to it than just the flashy art style and romantic setting. Behind all of the cuteness and the fun, there is a meaningful story hidden behind Nisekoi, and it’s worth going through all three seasons of the anime.

The manga series was originally written by Naoshi Komi, and was initially slated to be a one-shot novel only. However, the popularity in Japan led Komi to write a total of 193 chapters spread across 20 volumes. There are some characters which never made it to the anime adaptation, and if you want to check out the full roster of characters which make the plot even more complicated than it already is, you should definitely check out the manga. The first season of the anime is quite fast-paced, and it covers almost 50 chapters which is a lot considering there are almost 200 full-length chapters. All of the main characters except Yui were brought to the anime adaptation.

The second season of the anime is much shorter with just 12 episodes, and it covered the story until the 100th chapter. Fans love the second season just as much as the first, and it is, in fact, the third season that takes a sharp turn with the storytelling. The story progresses very slowly throughout the first two seasons but we see a massive leap in speed, and even though there are some filler episodes, they do not take away from the experience. Now, the biggest question everyone has in mind is: who holds the key to Raku’s locket? Today, we will take a look at Raku’s journey and find out who holds the key.

Nisekoi’s protagonist is Ichijou Raku, your average high-school aged kid who happens to be a gang leader. If you have seen ‘Sons of Anarchy’, you will know exactly the kind of lifestyle Raku leads. Soon after you start with the anime, you’ll learn that Raku once made a promise to a girl that they would get married later in their lives. Raku never forgot the promise. He owns a locket that can only be opened using a key owned by the girl.

We all have childhood dreams like Raku, and some of them do turn out to be a little unrealistic. Nisekoi grounds us into reality within a few episodes as we see Raku’s father strike a deal with a rival gang. Members of both gangs come to a peace agreement, and Raku is forced to be in a relationship with a girl from his rivals. As you would expect, Raku wants to keep his childhood promise, but things take a comic turn with a number of girls claiming that they hold the key to Raku’s locket. Things get even more complicated as Raku starts falling in love with Onodera Kosaki, a classmate of Raku’s from high-school. Even though Raku is popular, he is always in a dilemma about his old promises, his obligations to his family and his true love.

Chitoge is a half-American half-Japanese girl who is the daughter of the Beehive gang leader. She is often seen with a female bodyguard whom Raku calls ”Gorilla”. It turns out that Chitoge had made a promise similar to Raku to a childhood friend of hers and even she owns a special key. But she does not remember who the boy was. While the average anime fan would think that Chitoge and Raku are destined to be with each other and that Chitoge might be the keyholder to Raku’s locket, we do not find out for sure until later in the series.

Even though Raku and Chitoge’s relationship is forced, they begin to fall in love with each other. While Chitoge seems interested in Raku, Raku’s heart lies somewhere else. Throughout the series, Raku’s love for Kosaki keeps growing. Unlike Chitoge who comes from a gangster family, Kosaki’s roots are much simpler. She comes from a family of bakers who are renowned for their delicious Japanese treats and pastries. Raku tries to win Kosaki’s heart and helps her out in the bakery, which leads both of them to become really good friends. 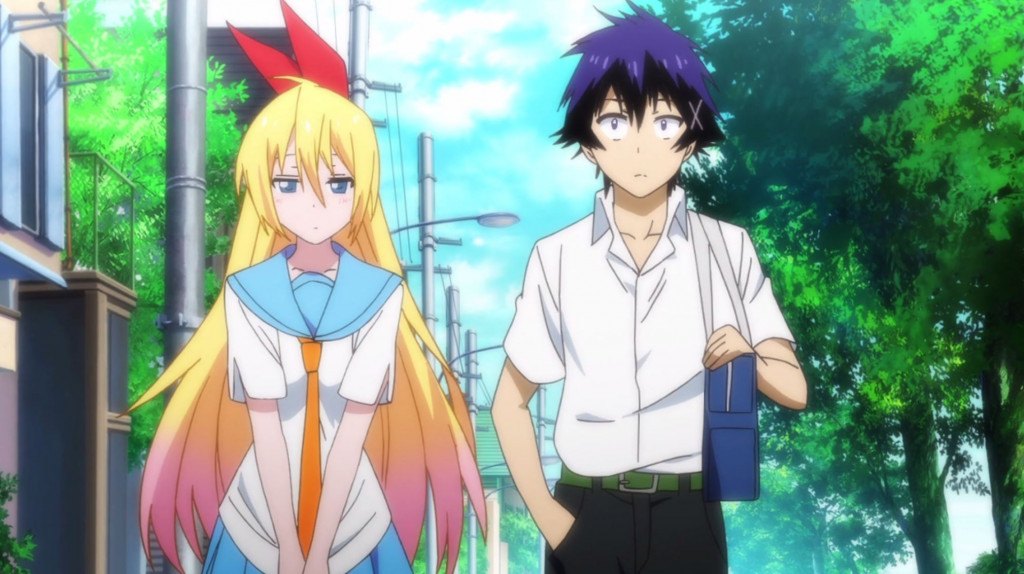 It is soon revealed that Kosaki has feelings for Raku and has had feelings since they became friends in middle school. In fact, Kosaki chose the high school she wanted to go to because Raku was planning on attending the same one. And to no one’s surprise, Kosaki also has a key to a locket which could potentially open Raku’s locket. Of all the characters in the series, Kosaki grows the most. She starts off as a timid girl but slowly gains her confidence. Once we get used to the love triangle, yet another love interest shows up. Tachibana Marika is Raku’s childhood friend who was kept isolated all her life due to health issues. Even though she is expressive of her feelings towards Raku, she is still suffering from health issues. Marika grew up in a Japanese hospital for the most part of her childhood, and she reminds Raku that he used to visit her in the hospital when they were kids. We see a flashback showing young Raku bringing various gifts from the forest on his way to the hospital as a child.

Someone we did not expect to become Raku’s love interest is Chitoge’s bodyguard, Tsugumi. While Raku does not display signs of romantic interest in Tsugumi, it is our beloved ‘Gorilla’ who shows signs of affection for Raku. Even though she is trained to be an elite member of the Beehive Yakuza gang, she can’t help but give into her human side and fall in love. She has a tomboyish attitude, and during the first few episodes of the anime, we see Raku constantly making fun of her, and many fans mistook her to be a girl as Tsugumi wears a boy’s uniform. She does not become a major love interest until later in the series, and she refuses to acknowledge that she likes Raku. Tsu and Raku do end up becoming good friends, and she is a confidant and counselor to Raku throughout the series. As a mentor figure, she gives a lot of good life advice and happens to be much more mature than the rest of the cast.

The Disappearance of Yui 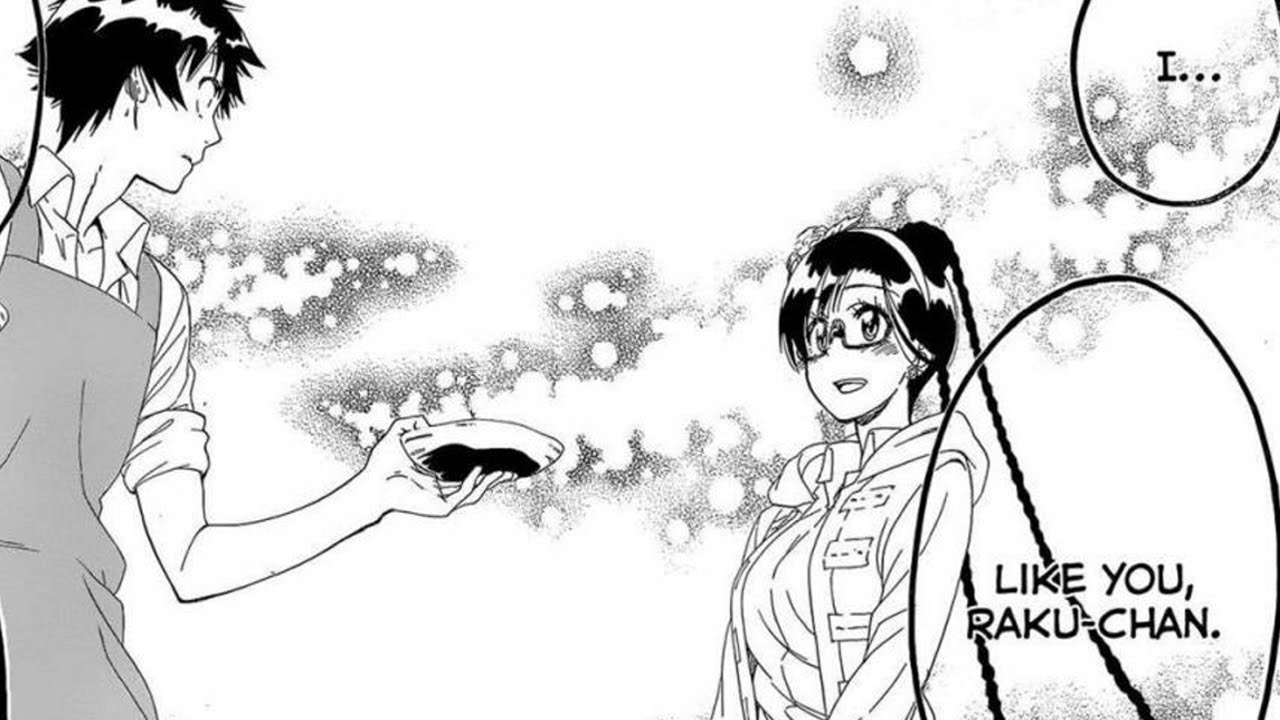 The final love interest we do not get to see in the anime is Yui. We only get a glimpse of her as an easter egg hidden in one of the episodes, but we’d rather not spoil it for you. Yui is a sister-figure to Raku since their childhood and needless to say, things do get a bit out of hand when she appears in the manga. It is revealed that Yui went out of Japan and became the head of the Char Siu Mafia. After the death of her parents, she makes a return to Japan and reconnects with Raku. She gets a job as the homeroom teacher at Raku’s school and is also one of the key holders. She knows all of the other characters as she was in Japan for a few years before she moved out. It is unfortunate that she didn’t make it into the anime as Yui is one of the most interesting characters in the manga.

The Ending: the Promise Girl 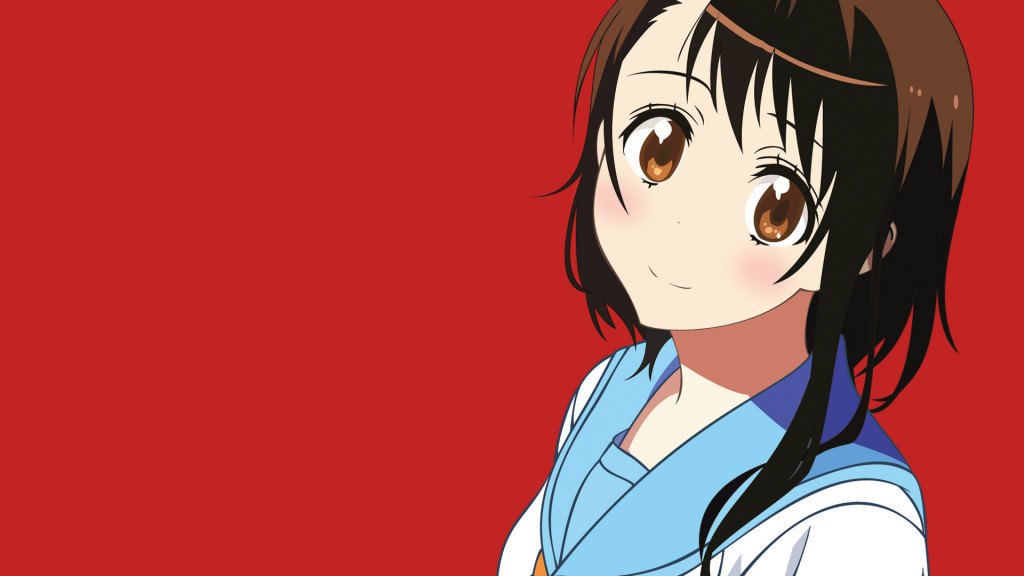 At the end of the anime, it is revealed that Kosaki is the promise girl. While most of us were rallying behind Chitoge Kirisaki, we were eventually proven wrong. According to the most popular theories based on the name and the manga, Raku keeps dreaming about a girl with long hair, and when you take a look at all of the flashbacks in the series, Chitoge is the only one with long hair. The revelation left a number of fans disappointed as we saw absolutely no flashbacks showing Kosaki with long hair. Yui was the only other character with long hair as a child, but she was not a part of the series, which also confused a lot of fans. It can only be assumed that Raku changed the story of the promise girl a fair bit or simply recalled past events incorrectly.

Moreover, whenever the promise girl was teased during the ending theme, the features of the girl matched with those of Chitoge’s, including a red ribbon. Marika was second in line to be the promise girl considering she had a number of telltale signs that indicated she was the promise girl. But we were simply tricked by the mangaka to believe what we saw on screen. The goal of the creators was to offer an illusion that we were onto something but we were eventually given a surprise ending that no one ever expected. Haru Onodera was never in contention according to fans and the only things tying her to Raku was her presence ten years ago and the book. Tsugumi was also a weak contender as the writers did not put in much effort into making us believe that she could be the promise girl and it is also unlikely that Raku and Tsugumi made any promise of marriage. 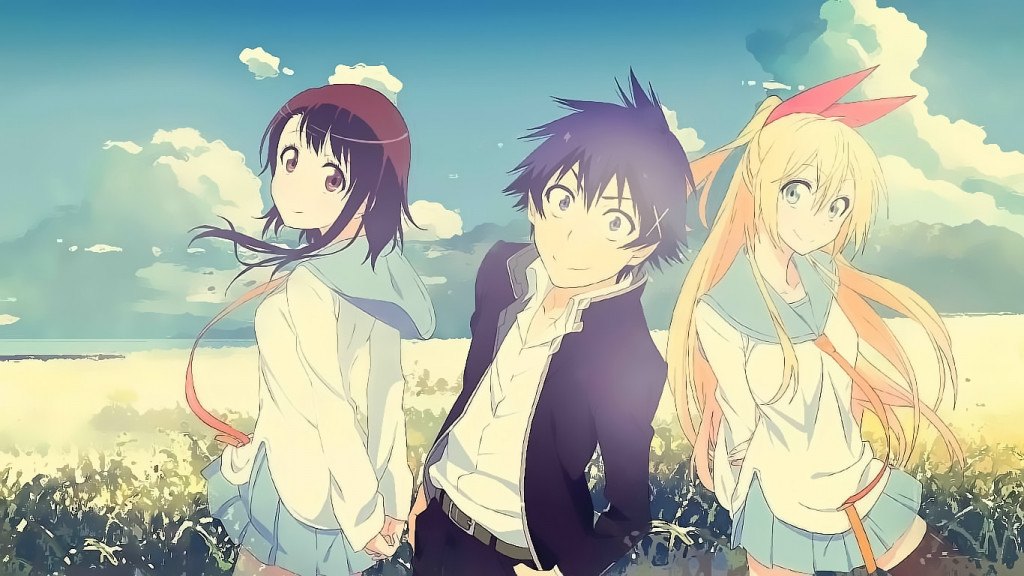 We all know how devastating fake relationships can be and despite Nisekoi’s impression of being your usual rom-com fare, there is a lot more to the story. There is no denying that it is a harem show and the fact that the protagonist finds a love interest in Yui, a girl who is like a sister to him, can be unsettling to fans. Behind the façade, it is a tale of friendship, lost love and childhood dreams. We grow up with a lot of dreams and not all of them come true. While Raku does end up finding the girl of his dreams, is he really happy? Over the years, he fell in love with a number of other girls, and he even found love in his forced relationship with Chitoge. We will never know for sure if Raku is happy with his relationship, and we can only speculate that things would turn out to be good between him and Kosaki.