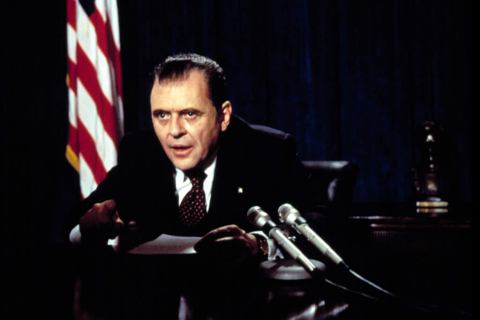 Oliver Stone seemed like the last man who should direct a film about former President Richard Nixon. As a child of the sixties, enraged at what happened to the young men and women who fought in Viet Nam, Stone seemed to much against Nixon from the outset to even begin to make an honest film about the disgraced President. Armed with two Academy Awards for Best Director, winning for Platoon (1986) and Born on the Fourth of July (1989) with a third nomination for JFK (1991), when he announced his next project would be a biography of Nixon, more than few eyebrows were raised.

Would this be one of Stones patent attacks on the man, filled with paranoia, conspiracy, and controversy or would this be a greater challenge to the director, an honest film about a deeply flawed man who did great things in the White Office before his own in securities brought him down.

Stone made it clear he wanted to make an honest film about Nixon, he was not interested in a hatchet job, he wanted to make an insightful, strong movie about one of the most polarizing figures in American history. He spoke with Jack Nicholson about playing the role, then Tom Hanks before settling on Anthony Hopkins, a recent Oscar winner for Best Actor for The Silence of the Lambs (1991). Hopkins bore no real physical resemblance to Nixon, which did not matter, what Stone felt he could do was capture the wounded soul of the man, and once he did that the audience would believe he was Nixon. Hopkins was a gifted actor, he could make this happen.

When the film opened, the faith Stone had showed in Hopkins was superb, as the actor did not resemble the former President but managed to capture his essence, the desperate sense of be lonely, not comfortable in his own skin, aw awkward man with a brilliant political mind brought down by his own flaws of character, not quite believing he deserved to the President. Hopkins captured the body language to perfection, that stoop, the manner in which he smiled at the most awkward moments, and that the smile never touched his eyes.

Nixon did many great things during his Presidency, including opening relations with China and Russia, he ended the war in Viet Nam, his foreign affairs policies were second to none, in many ways he was brilliant. But he was also paranoid of those around him, he trusted no one, and when accused of knowing anything about Watergate, he lied. His presidency was undone at the moment he told that first lie because there were tapes, a paper trail and witnesses that could tie Nixon to it all. And they did…slowly, but in every way.

The film is told in a non-linear fashion, moving back and work through time, seeing his triumphs as well as his failures, watching him fall from the highest office in the land. At one moment, he stands before a portrait of Kennedy and says…”when they see you they see what they want to be…when they see me they see what they are.”

The film shows a little known moment in his presidency that truly happened, an impromptu visit to the Lincoln Memorial by Nixon at night, seeking inspiration where he spoke with a group of students about the war and the face he wanted it ended as well. It was a striking scene where we realize along with the students, that he cannot just end it. The war has taken on a life of its own, and even the President cannot just end it.

A great deal of the film explores the Watergate break in and mess, and the reaction of the President and the impact on his family, who are left reeling in shock. He must admit to them that he taped conversations in the White House, that no one escaped his paranoia. Moving back and forth through his life, we see his strong relationship with his mother, the death of his two brothers, that sense of worthlessness that he overcame through politics. The staggering loss to Kennedy in 1960 drives him out of national politics, only to be enticed back by a group of businessmen who see him as the great white hope.

Hopkins gives a stunning performance, allowing us a glimpse into the mans tortured soul. Over the course of the picture he overcomes the fact he does not look like Nixon by nailed the speech patterns, the body language and that seemed fake smile. Part way through the movie you will swear you are watching the real Nixon…it is uncanny.Joan Allen is perfect as his wife Pat, long suffering but forever by his side. Paul Sorvino is solid as Kissinger, nailing the speech pattern, while Ed Harris and the rest of the cast are superb.

This was one of the years best films, one of the greatest biographies ever made because it has the courage to show the subject warts and all. In his flaws we see the man, we see ourselves. Nominated for four Academy Awards, too few.