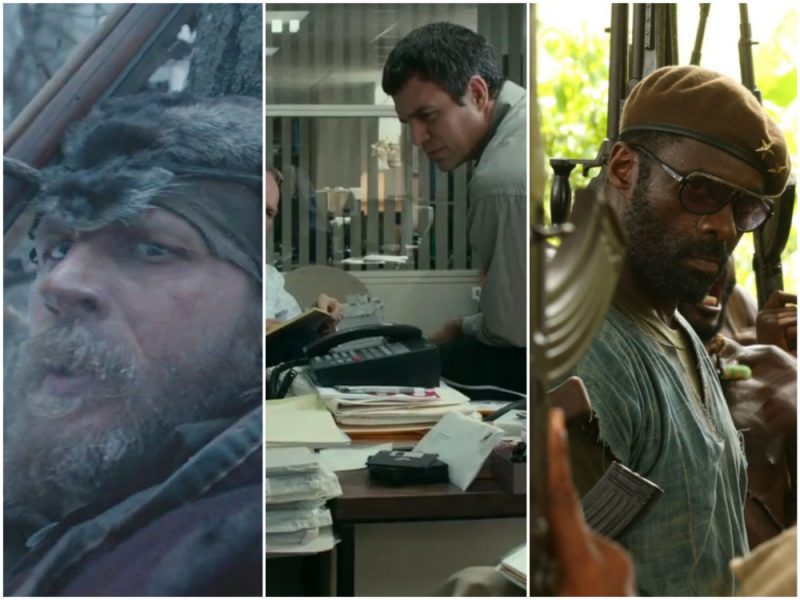 In this six part feature I am going to take a look at the potential nominees for the top six categories for the Academy Awards as they sit right now, and understand I do this while we still have not seen (though some have and are talking) Tarantino’s western ‘The Hateful Eight’; ‘Joy’, the latest from David O. Russell and Jennifer Lawrence; ‘In the Heart of the Sea’, the huge whaling epic from Ron Howard; ‘Star Wars – The Force Awakens’; ‘Concussion’, with Will Smith in dramatic mode, and, perhaps most important of all, ‘The Revenant’, which is said to be the frontrunner for the Oscar as Best Picture, Actor and Director. Those are the major contenders for Oscars we have NOT seen yet, but have buzz circulating through Hollywood.

So over the next few days I am going to explore what is happening within each category right now who is talking about whom, who is the frontrunner, who is falling off the radar (yep…it is happening already) and a prediction as to what could happen and who the nominees could be.

For me this has always been one of the more exciting categories, a place to honor new up and coming actors, a place where veterans moved to the smaller character roles can shine, or the ones I dislike, sentimental wins for long standing actors who have never won. This year offers several potential nominees for each of those possibilities.

As young Brian Wilson, the heart and soul of the Beach Boys, Paul Dano in ‘Love and Mercy’ gives a sterling performance that will grab more than a few critics awards this winter, and should, SHOULD land the actor an Oscar nod. He is mesmerizing as Wilson, not so much a performance as a channelling of the characters soul into his work. For me they could just give him the Oscar now…he is that good.

Michael Keaton lost Best Actor for ‘Birdman’ (2014) last year, an award many felt (myself included) he should have won. It was a brilliant performance and a huge comeback for an actor who had been essentially career dead for a long long time. Visibly disappointed when he lost, you can see his acceptance speech get tucked into his pocket, he will be back this year in the supporting category for a second chance at an Oscar. Now, if he is nominated and if he wins, it will be because he does superb work, but many will say also he won because he did not last year and it is hard with the Oscars history not to believe that. Keaton is all but a shoo in for Spotlight. His co-star from the film, Mark Ruffalo is another who could land a nod for his work in the picture, along with Liev Schreiber. Spotlight is the sort of film that could dominate a single category as The Godfather Part II (1974) did with three actors up for supporting actor, and  emerging the winner.

If there is another absolute shoo in, will happen, written in stone it is Idris Elba for his terrifying work as the evil Commandant in Beasts of No Nation, the Netflix movie that has earned rave reviews but struggled at the box office. A dark and uncompromising film, Alba gives the film its darkness as a man who trains young children to become child soldiers, killers in the lush jungle. The intensity of the performance is alarming to watch, and his eyes project a menace that is terrifying as it possesses no conscience.

Like Keaton, veteran character actor Bruce Dern was nominated for Best Actor a few years ago for Nebraska (2013), a wonderful performance that in any other year would have been an award winning career capper, but not in the year of Matthew McConaughey in Dallas Buyers Club (2013). Long a respected actor, his only other nomination coming in the seventies for his haunted Viet Nam veteram in Coming Home (1978), Dern should have won an Oscar for that film, and a leading Oscar for his terrorist in Black Sunday (1977). The fact he lost for Nebraska (2013) might have no impact on the race at all, but he could earn him a nod for supporting actor in Tarantinos The Hateful Eight. Never nominated before Kurt Russell could be a first nominee for his work in that film as well! Russell, beloved in the films of John Carpenter, Escape from New York (1981) and The Thing (1982) should have been nominated in Silkwood (1983) but has never made it to the top five.

Previous Oscar winners Benecio Del Toro (Traffic; 2000), Robert De Niro (The Godfather Part II; 1974 — Raging Bull; 1980) and Best Director winner Robert Redford (Ordinary People; 1980) could all be nominated for their supporting performances this past year, De Niro in Joy, for David O. Russell, Del Toro as the dangerous informant in Sicario, and Robert Redford could earn his first acting Oscar as Dan Rather in Truth. If the truth were to be told, Redford deserved a nod for his brilliant performance in All is Lost (2014) but was incredibly passed over.

Little Jacob Tremblay could be a nominbee for his haunting performance in Room and the reviews are still pouring in for him, the campaign has been launched and it could happen and it will likely happen. The child is the heart and soul of the film, we see the world he has never known through his innocent eyes.

And finally Tom Hardy could be a first time nominee as the man being hunted by a vengeful Di Caprio in The Revenant, as we hearing raves about them both and the film. So here are the likely five along with another five who could be nominees as well…you just never know. The ten listed here should make up the final five…remember I said should…it’s the Oscars.