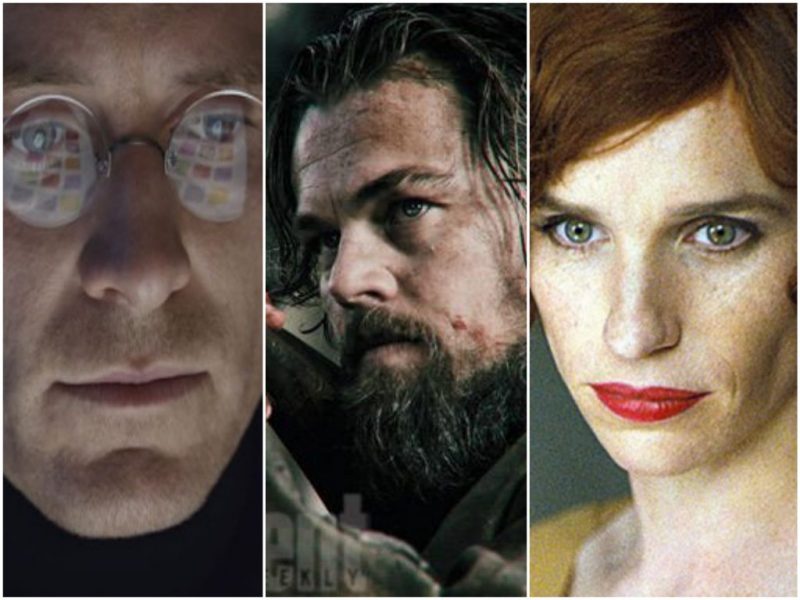 Normally this category is stuffed with nominees, and a month ago I would have said that was true again, but there have been some subtle changes in the last three weeks which will impact who is nominated. One month ago last years Best actor winner Eddie Redmayne (The Danish Girl) was a shoo in, but now I am not so sure. The film opened to underwhelming reviews, and despite a strong performance from Redmaybe, it was generally felt that Alicia Vikander outshone him on the screen, and gradually he has slipped down the list of actors hoping for a spot in the final five. He might get a nomination, but has no chance of repeating as Best Actor.

A different event has hit Michael Fassbender (Steve Jobs). The film has been a box flop, with audiences showing no interest despite rave reviews. He too might end up with a nod but the chances are becoming slimmer and slimmer with each passing day. Academy Award winners Tom Hanks and Michael Caine could land nods, Hanks for his man of integrity in ‘Bridge of Spies’, while Caine might be nominated for ‘Youth’.

Though only a few people have seen the film Leonardo Di Caprio is the frontrunner for what is said to be his career best work in ‘The Revenant’. Di Caprio should have won before, the first time for ‘What’s Eating Gilbert Grape’ (1993) and more recently for ‘The Wolf of Wall Street’ (2013), but the Academy has failed to honor the actor. This could be his time….finally. As a trapper left for dead in the 1800s wilderness after a bear attack, he will journey two hundred miles to seek his revenge on the man who left him for dead and killed his boy. The film is said to be an extraordinary work, utilizing the language of the cinema like few have and allowing the actors to do some of the best work of their careers. Could this finally be Di Caprio’ s time ?

It could indeed be but Johnny Depp cannot be discounted for his terrifying portrayal in ‘Black Mass’, just a superb piece of acting, the finest of his career. It should come down to the two of them duking it out. Outside chances are Steve Carell in ‘The Big Short’, which would be his second consecutive nomination, Abraham Attah for his galvanizing performance in ‘Beasts of No Nation’ and Geza Rohrig in ‘Son of Saul’, though the chances of a nod for any of those three remain slim.

From the world of television comes to the big screen Emmy winner Bryan Cranston for his work in ‘Trumbo’, a biography of the blacklisted writer Dalton Trumbo who wrote under different names through the fifties until Kirk Douglas broke the black list by offering Trumbo the job of writing Spartacus with credit.

Below is the full list of potential Best Actor nominees.