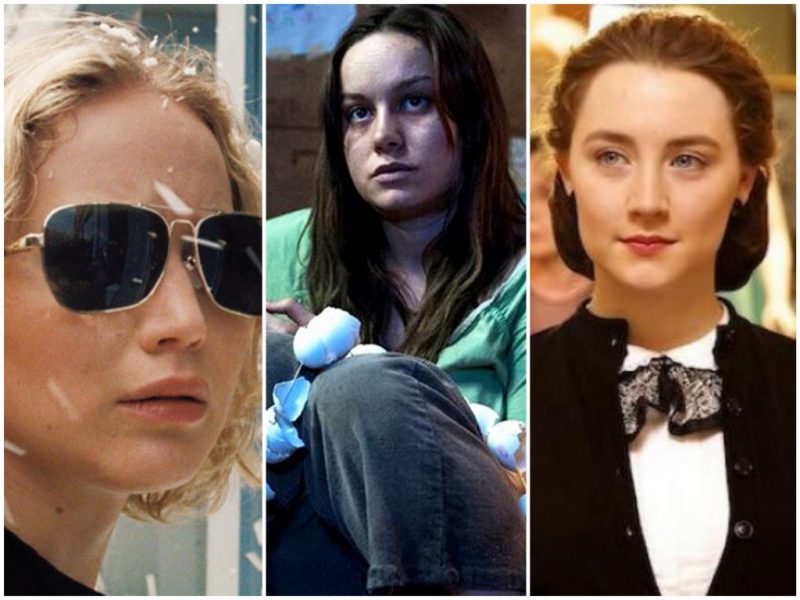 In other years this has been a tricky category to fill with worthy performances, but the last ten years have been pretty strong for women. This year is no doubt one of the best in a long long time with at least five award worthy performances to be left out…which is a shame, but not everyone can be nominated.

The absolute frontrunner right now is Brie Larson for her searing, often heartbreaking performance in ‘Room’ as a young mother shattered by her world being turned upside down with a kidnapping, a seven-year imprisonment, and finally freedom. Her strongest competition will be Jennifer Lawrence in ‘Joy’, said to be potentially headed for her second Academy Award before she is twenty six. Working again with David O. Russell, who guided her to her first Oscar and third nomination, as the woman who invented a major kitchen appliance and altered the course of her life.

The gifted Irish actress Saoirse Ronan is extraordinary in ‘Brooklyn’ and should garner a nomination for her work. Carey Mulligan has been setting critics pages on fire in ‘Suffragette’. There has been huge and ever-growing support for Charlize Theron in ‘Mad Max – Fury Road’. Cate Blanchett has two films for which she could be nominated and the situation is precarious. On one hand her work in Carol will likely get her the nomination, a well liked Todd Haynes film, though she actually deserves the nod for her stunning performance in Truth as Mary Mapes, the disgraced producer of Sixty Minutes.

Sentiment would play a huge role with two performances, though Lily Tomlin is a good bet for Gramdma, deserving the nomination. She has not been nominated since Nashville (1975). The second performance, which is also a strong contender is Charlotte Rampling for her moving performance in ’45 Years’. Emily Blunt earned strong reviews for ‘Sicario’, but the film is off the Oscar radar I think. If the Academy gets stupid, and they sometimes do, Maggie Smith gets nominated for ‘The Lady in the Van’…God forbid.

Below are the top contenders for Best Actress: