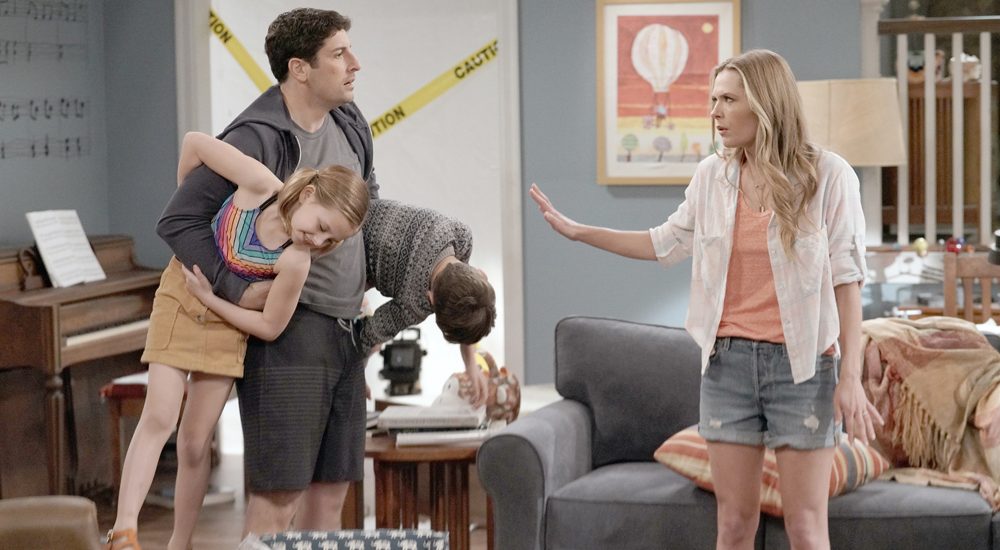 Raising kids is hard. And raising kids who are next-level geniuses, is super hard. Well, Jason Biggs and Maggie Lawson strive to manage that in their upcoming sitcom, ‘Outmatched.’ The live-action family comedy revolves around a proletariat husband and wife, who are struggling to parent their four kids, three of whom are official masterminds.

‘Outmatched’ has been created by Lon Zimmet, whose previous credits include ‘LA to Vegas’ and ‘Unbreakable Kimmy Schmidt.’ Jonathan Judge is donning the director’s hat on the show. He is best known for ‘Life in Pieces,’ ‘Young Sheldon’ and ‘The Cool Kids.’

Outmatched Cast: Who is in it?

Maggie Lawson and Jason Biggs are the regular parents, grappling over not-so-regular family issues. Jason Biggs plays the role of Mike, a dazed and confused classic father who works in the construction industry, and has no idea about raising kids, let alone 3 recognized geniuses. His notable works include ‘Orange Is the New Black’ and ‘American Pie.’

Joining him is Maggie Lawson, who essays the character of Mike’s wife Cay, who works as a pit manager in a local casino. An acerbic woman, Cay is not going to compromise in the pursuit of making her haughty children behave normally. She is best known for ‘Lethal Weapon,’ and ‘Psych.’

They have four kids running around the house creating a ruckus. ‘The Grinder’ fame Connor Kalopsis enacts the character of the eldest Brian (16), a toffee-nosed quantum mechanics expert, who snubs his parents, the first chance he gets. ‘Lost in Oz’ actor Ashley Boettcher stars as Brian’s sister Nicole (15), a ruthless language expert who can deceive her parents by pulling sneaky tricks, to get whatever she wants. Jack Stanton, known for ‘The Mick’ plays the 10-year-old brother Marc, an anti-social and eccentric, Beethoven in the making.

‘Beautiful Boy’ fame Oakley Bull steps into the role of Leila, the only kid who isn’t and doesn’t aspire to be a genius, and instead wants to be a waffle. Right. A Waffle. You get no points for guessing why shares a great rapport with her Mom and Dad.

The show also features ‘The Good Cop’ actor Tony Danza, who guest stars as the retired grandfather with a steamroller personality. ‘Saturday Night Live’ alum Finesse Mitchell stars as Mike’s co-worker and close pal Irwin, an understanding, confident, funny and desirable former jock. He is married to a headstrong woman, Rita. Playing Rita, is ‘My Wife and Kids’ fame Tisha Campbell-Martin. Rita is a force to reckon with and wears the trousers in her marriage to Irwin.

Outmatched Plot: What is it About?

The show is centered around two working-class parents Mike and Cay from Atlanta City, whose main focus in life is to manage their four kids – Brian, Nicole, Marc and Leila. Sounds pretty relatable, right? Well, three out of their four offspring are certified geniuses. The rathe-ripe kids outmatch their parents in academic brilliance and IQ levels, making it difficult for the mother and father to bring them up in a conventional manner. The youngest Leila, is the only one, whose average intelligence matches the vibe of the parents.

Mike and Cay are doing their best to manage a normal state of affairs in their not-so-normal household, along with balancing their work-life, and also dealing with the unexpected twists and turns life throws at them. But it isn’t always easy with the changing personalities of the kids. The condescending remarks and demands of the three children, often result in ego clashes which fills the two adults’ conscience with a fear that they’re terrible at parenting and are “ruining” their kids’ future. Clearly not the case here.

There isn’t a right way of raising kids. It is always a case of trial and error, especially when you’re dealing with entitled kids who feel the world revolves around them, and think that they’re always a step ahead of you. ‘Outmatched’ replicates the challenges parents face, in a light-hearted and fun way without distorting the transparency, in the process.

The show also tries to depict the basic norm of how good parenting can produce gems like climate activists, professionals, kids who go on to save the world; while highlighting the question of ‘what could go wrong?’ if a kid is not brought up right. With the pressure of perfection hanging on them 24/7, could Mike and Cay weather the storm? We’ll know.

Outmatched Season 1 Release Date: When Will it Premiere?

In a conversation with Boston Herald, Maggie Lawson, who plays Cay, opened about why she chose the show. She said, “This is one of the first scripts I read during the last pilot season, and I was immediately like, ‘I want to do this one.’ I thought it was such a funny idea. And I read the ‘LA to Vegas’ pilot years ago, and I loved that script, so I knew this was going to be good.”

Talking about how the show is relevant in today’s world, Maggie further added, “This generation of kids doesn’t know life without the Internet and the iPhone, and the show is called ‘Outmatched’ for a reason. We have kids who are so smart, they are outsmarting us (older people) all the time. That’s how it is on the set, too. The kids will be talking about something and I’ll say, ‘Wait. What? What did you say? I don’t even know what that means.’ These kids not only play smart in the show, they’re incredibly smart. And professional. And good. I’m not going to lie, it’s kind of intimidating.”

Check out the first-look of ‘Outmatched’ season 1!