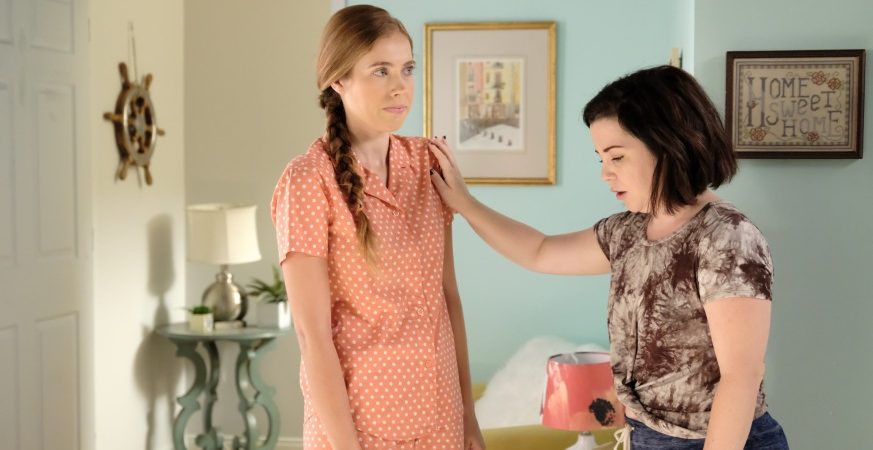 Now is the age of bingeing on streaming services, so short and focused narratives as original productions are now more in vogue than ever. Netflix and Amazon Prime have already set up shop in this regard, but YouTube Red (currently YouTube Premium) seemed to be the red flag (no pun intended) for many consumers because of its mediocre track record across the board, and especially in comedy originals – whether or not they were objectively uninspiring, Do You Want To See A Dead Body? and Champaign ILL were cancelled in April this year, and the promising surreal web series ‘I’m Poppy’ seems to have hit a standstill with only a pilot out so far for consideration. The premium subscription-based streaming service knockoff on YouTube at least had some room to breathe with ‘Overthinking with Kat & June’, but it was also cancelled on March 25, 2019, after its first season.

Overthinking with Kat & June tells the tale of two adults who cross paths as roommates and form a “strange but beautiful” friendship. The comedy series was one of the first YouTube Premium Originals; it premiered on December 19, 2018, and wiped the floor, winning fans over as one of the most well-celebrated YouTube comedies till date. It brilliantly portrays a difficult storyline and Mackenzie Yeager, its creator, blends the series with some perfectly hilarious punchlines which make it quite convincing for the audience to be able to connect with the show. There are equally memorable and hysterical scenes as the duo overthinks their way through life.

Overthinking with Kat & June Cast Who’s in it?

Overthinking with Kat & June stars as the titular characters Tenea Intriago (you know her from Law & Order: SVU) playing Kat and Alexia Dox (known for her appearance on Quick Draw) in the role of June.  The six-episode series also stars Justin Kirk as David, Kat and June’s older landlord, Emily Hinkler as Tessa, Elizabeth Hinkler as Molly, and Sasheer Zamata as Tiff.

Overthinking with Kat & June Plot: What is it about?

Overthinking with Kat & June focuses on the start of an unlikely friendship between its lead characters Kat and June and follows that budding equation as it takes the form of unconditional love between the two. Unlike most successful friendships that stem from shared interests, likes and dislikes, the high-end comedy series brings into the fold two women who have nothing in common, who meet each other as roommates (a forced situation in the eyes of most people) and go on develop an everlasting bond. What makes this series a laugh-out-comedy is that it employs a rather risky narrative device where the audience can hear the thoughts going through the character’s minds, much like what we got a glimpse of in the Michael C. Hall-starrer Dexter.

Creator Mackenzie Yeager shared her take on the show. She said, “I wanted to showcase those weird, complicated female friendships that I have had in my life, that come up kind of unexpectedly. The show is really just about how some women I know think; it’s about the twisty, complex, beautiful nature of the female mind, shown through the relationship of these two human people. Who also just happen to have vaginas.” She added, “The one thing I want people to know is that these people are flawed, they’re in their twenties, and don’t know what the f*ck they’re doing. They’re going to be strong later in life, but at this point, they’re not strong!”

The duo’s inner musings are thoroughly entertaining as they fantasize about David, their landlord. In another sequence, we see June stressing over her first date and Kat running around earnestly to prepare her for the experience with the help of Tessa and Molly. It makes for a hilarious watch. The show doesn’t just thrive on its quirks and amusing oddities but also highlights the complexities and insecurities that are associated with adult friendship.

Overthinking with Kat & June became a sleeper success after the airing of first three episodes after premiering on December 19, 2018 . However, the show was cancelled after its first season in YouTube’s alleged bid to pull the plug on high-end dramas and comedies.

Although, according to a company executive, the rumours were claimed to be false who revealed that the Google-owned company had plans to launch more series in the category following revamping its streaming model which would be more inclined towards an ad-based model as opposed to the current subscription-based model of YouTube Premium. The website has plans to implement the concept by the end of the year.

Whatever the case, Overthinking with Kat & June, one of YouTube’s more expensive comedy shows, remains cancelled alongside the Tom Felton-starrer Origin. However, the first season of the series is available to watch on YouTube Premium. Here is the official trailer of the series for you to get a head start into the series.