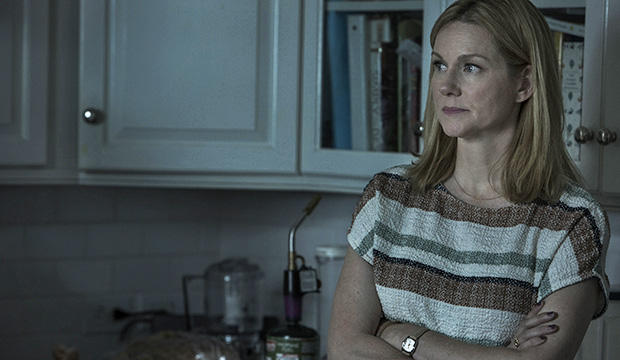 Things have been rocky between Wendy and Marty ever since the beginning of it all. Wendy’s affair, Marty’s mess up, and all that followed, they faced a lot of problems together, but never really got the time to address it. There were a couple of murders in between- the death of Mason at Marty’s hands and Cade’s murder at Wendy’s order- and for both of them, Marty and Wendy did not get the time to talk it out or refused to acknowledge it altogether. All this discontent and anger has been bubbling up for a long time and eventually bursts out.

Despite all the challenges, especially the constraint on their marital status, the Byrdes has continued to function rather well, considering everything. But the conflict that has surfaced now might take a lot more to calm down.

After Wendy too bribes the therapist, things don’t go as either of them had planned at the next session. Sue comes clean about accepting bribes from both of then and the real feelings of the couple come to the surface. Marty lashes out at Wendy for dragging their family back into the mess when he had planned their escape so meticulously. Wendy chides him about being reckless and putting their family in danger.

Charlotte tries to keep Erin away from Tommy, but the situation gets out of hand when weed and guns are involved. Ruth grows closer to Ben and comes to know about Wyatt’s new situation with Darlene. Wendy, too, tells her about Ben’s past actions and relationships. A new problem comes to light when Marty discovers that he is being tailed. He pushes forward in his quest to turn Maya but the unknown threat distracts him.

After bringing in more thrill with the new task of turning the FBI Agent, the show adds further tension to the series by making Marty and Wendy’s situation more volatile. Unbeknownst to them, Darlene had started working on her own plans with the poppy field. Her affair with Wyatt and going toe to toe with the cartel, once again, adds the much-needed strain to an already taut storyline.

In its second half, ‘Ozark’ prepares us for a number of conflicts that appear pretty clearly on the horizon. The different pieces of the story are coming together now, and what’s wonderful to see is that most of the storyline is being driven by female characters. Not that there was any lack of them before. More than most of them have been around ever since the first episode, but the way they have fleshed out over the course of time is beginning to show now. From Charlotte and Ruth to Wendy and Darlene, and Helen and Maya Miller, there are so many shades of women all around that are generally wanted for in other shows.

It is them taking charge that has infused more life into ‘Ozark‘. In them, we have an anti-hero that we might grow to love to hate, there is a lovable character that we’d absolutely hate to lose, and then there is the villain that rarely demands sympathy, if at all. As compared to them, the male characters are pretty much the straight-forward form that we have seen a whole lot of times before. With only four more episodes to go, it’ll be interesting to see where the story takes them.

While the rest of the things have been coming together very well, some things have shifted in the background. Not to lose focus of them, the show keeps bringing us back to those bits and pieces that will play a big role in the long run.

As has become apparent in this season, ‘Ozark’ is checking several things off its list. Be it the questions that have only recently surfaced, or the things that have lingered around for a very long time, the show seems to be cleaning its slate of all the major issues that have stacked up. From how the things end for this episode, it looks like it was necessary to address these problems before introducing a new one. Another character comes dangerously close to meeting their end. Hinging the cliffhanger on the mystery of what this new danger could be makes it interesting.