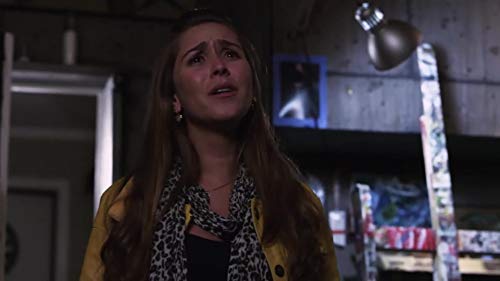 Lifetime’s ‘Paradise Prey’ originally started off with the title, ‘Deadly Excursion’. The basic premise of the film follows a mother-daughter duo, who find their trip going horribly wrong when they are targeted by a dangerous individual.

The film starts with a couple going through marital problems and deciding to split. This affects their daughter, so for the last spring break, the mother and daughter decide to go on a trip to Florida’s Gulf Coast. Their vacation seems to be going well enough, even though the husband keeps calling. Meanwhile, the mother meets a man who invites them on his yacht for sailing, the next day.

It starts off pleasantly, as the trio take in the sights. However, things go sideways when the man tries to kidnap the mother, and kill the daughter. Somehow, he is subdued but the women don’t know how to sail. They manage to get to an island and the woman communicates to her husband that they are in trouble. He sets off to find them and alerts the FBI, but the island has its own threats, which the women might not survive.

The thriller is accentuated by the performances from the cast members, and obviously the exotic island setting, where the beauty of the place is contrasted with the darkness of the actions. Naturally, you might be wondering where was ‘Paradise Prey’. We have got you covered in that regard.

‘Paradise Prey’ sees the mother and daughter head to Florida’s Gulf Coast, specifically, St. Petersburg, or St. Pete, as the locals call it. St. Pete is located in the Tampa Bay area and is the second-largest city there while being the fifth-largest city in Florida. It has been nicknamed the sunshine city, for its good weather. Since the film commission offers local incentives, it is a popular filming destination, which has also seen major Hollywood movies like parts of the ‘Ocean’s‘ series being filmed there.

At St. Pete, the mother and daughter check into a hotel. Obviously, this is the Don Cesar Hotel at 3400 Gulf Boulevard, St. Petersburg. It is one of the historic hotels of America, that has hosted President Roosevelt, and a long line of American presidents since Gerald Ford. For cinephiles, parts of Sergio Leone’s ‘Once Upon a Time in America’ have also been filmed here. You can check out, cast member DeBerry’s picture, about filming at this iconic location.

While St. Pete, and the luxurious Don Cesar Hotel, serve to build up the tale, the action mostly unfurls in the supposedly deserted island where the mother and daughter ultimately go. Now, some sources list the actual setting of the island to be Egmont Key in Florida. However, it is much more likely that ‘Paradise Prey’ has been filmed at Beer Can Island, in Pine Key. You can check out a behind-the-scenes shot at the same place, proving our point.

It is evident that ‘Deadly Excursion’ or ‘Paradise Prey’ has smartly used popular locations in Florida, to portray an exotic setting, while the beauty of the place belies the dangerous action that unfurls in the film, making the contrast between location and action even more striking.

‘Paradise Prey’ is basically centered around the mother-daughter duo, Samantha and Ellie. David is Samantha’s husband and Ellie’s father. Javier is the mysterious and handsome stranger who invites the mother and daughter on the sailing trip. The roles are played by Samaire Armstrong, Alexandria DeBerry, Corin Nemec, and Callard Harris, respectively.

Born in Japan as Samaire Rhys Armstrong, she has managed to appear in several renowned shows like ‘The Mentalist‘ and ‘Entourage‘. She plays the role of 37-year-old Samantha in the movie. Samantha is the one who befriends Javier at the resort.

Alexandria “Allie” DeBerry started modeling at the age of 5 in her hometown in Texas. Eventually, she moved to LA to pursue acting. She has appeared in Disney’s ‘A.N.T. Farm’, among other shows. DeBerry appears as the 17-year-old Ellie in the movie. While in her final year, Ellie is informed of her parents’ split and takes it hard. Thus, before college, the mother and daughter spend their last spring break together. Needless to say, it turns out to be an experience to remember. You can check out her post aboard the yacht, filming for ‘Paradise Prey’.

Corin Nemec’s name comes from the fact that his grandmother used to call him Corky. Born in Little Rock, Arkansas, Nemec eventually moved to Atlanta, and now lives in California. Throughout his career, Nemec has had several appearances, mostly in television shows. Notably, he has appeared in Francis Ford Coppola’s ‘Tucker: The Man and His Dream’, and in the long-running ‘Supernatural‘.

Nemec plays the role of David here. The disgraced husband confesses to his act of infidelity, driving his wife away. However, he wants to get back together and keeps calling Samantha, even when she is with Ellie. It is also David who rushes to their rescue when he realizes that his wife and daughter might be in serious danger.

Callard Harris is an actor and director, who has appeared in wildly popular shows like ‘The Originals‘ and ‘Sons of Anarchy‘. Harris appears as Javier Delacroix here. Javier strikes up a friendship with Samantha and invites her and Ellie on his yacht. However, he has more than sailing on his mind. Check out the post by Callard below, promoting Lifetime’s movie.