Alien creatures (or let’s say parasites) snatch human bodies and start controlling their minds to walk around amongst us in their human disguise. Sounds familiar, right? This concept has been adopted in some of the greatest alien movies like ‘The Thing‘, ‘Venom’, ‘The Host’ and even in an episode of the well-known cartoon show ‘Ben 10’. Quite similar to this is the premise of ‘Parasyte -the maxim-‘. But even though we’re quite familiar with this notion of alien parasite invasion, it never seems to get old. It’s terrifying yet entertaining to see humans getting consumed into a mess like this and then battling to take control over these alien creatures.

The original source material of this anime, which is a manga written and illustrated by Hitoshi Iwaaki, first came out almost two decades ago and it was an instant hit back then. But who knew that its anime adaptation could be even better. Madhouse Studio took it onto to create the anime version of the sci-fi manga ‘Parasyte Beasts’ in the year 2014 and the outcome of it is certainly not disappointing. With some amazing shows like ‘Death Note’ and ‘One Punch Man’, Madhouse has a reputation that it has to live up to, and it certainly does so with the first season of ‘Parasyte -the maxim-‘.

The show has literally no chill and right off the bat starts displaying brutal horror. Within the first few seconds of the first episode, you start feeling that you’re in for something that is not going to go easy on your stomach. But it’s one crucial part of the anime because it reflects upon the scary reality of things and the nature of the parasites. What makes the whole “typical sci-fi” premise of the show stand out is its ability to focus more on human nature during like these and also the outlandish battles that follow these events. It shows what some humans can be capable of in extreme situations regardless of being controlled by a parasite or not.

The anime is quite tragic and it certainly affects you on an emotional level, so watch out if you get triggered too easily. If you are a sci-fi horror fan and haven’t seen the first season yet, then you should definitely give it a shot. Trust me, you will not regret it. Those who have seen it are very well aware that it hasn’t been too long since the first season ended and so, there is some hope for another season of this remarkable wonder.

Parasyte Season 2 Release Date: When will it premiere?

Parasyte season 1 premiered on October 9, 2014, and ended its run on March 29, 2015. It featured a total of 24 episodes with each being 23 minutes long. The last few episodes of the first season hint towards a possibility that there are a few parasites still remaining in the world, who co-exist with humans. Now that can either indicate that there is a possibility of a new season or maybe it’s just the way the creators wanted to end the show. In the unlikely scenario of the show getting renewed, Parasyte season 2 release date could be sometime in 2021.

Though, if you look closely, the plot of the first season ends exactly where the manga comes to an end, so that again indicates that a new season may never come unless Madhouse decides to take up an original anime storyline. If you want more of the parasitic action, you can always watch the two-part movie adaptations of this anime, which are not really on par with the anime but overall aren’t all that bad either. But hoping for a new season is pretty much like nailing Jell-O to a tree.

You can stream Parasyte Season 1 on Amazon Prime and Netflix with its original Japanese audio and English subtitles.

The plot of ‘Parasyte’ centers around a 17-year-old boy named Izumi Shinichi who lives with his mom and dad in a peaceful neighborhood where they lead simple and peaceful lives. But this peace is completely shattered when worm-like parasitic aliens invade the surface of Earth. In their physical form, these aliens are probably harmless and are extremely tiny in size. But when they start entering the brains of human beings through their noses and ears, havoc is ensured everywhere on the planet. But in Shinichi’s case, a parasite that tries to enter his brain fails because he has his headphones on. So instead, the parasite just buries itself in Izumi’s arm, the result of which is two different hosts residing in the same human body. The original host is obviously Shinichi but the parasite whose name Migi retains some space in his body with its own intellect and personality. (Till here it sounds a lot like Tom Hardy’s ‘Venom‘, doesn’t it?)

Soon, Shinichi forms a bond with his parasitic self and uses this ability to destroy other parasites who use humans merely as food. Upon realizing that he possesses such powers, Shinichi becomes the prime target for most other parasites but he is much stronger than they realize. The uneasy co-existence of Shinichi and Migi soon turns into a lovely friendship where both of them accept each other as different yet the same parts of the body that they share. While the silent war between humans and parasites continues, Shinichi might just be mankind’s last hope to win it. The live-action movie adaptations of this anime also have a very similar premise but you’ll enjoy them only after you’ve watched the anime. Even the manga is pretty good and anyone with the slightest interest can give it a shot. 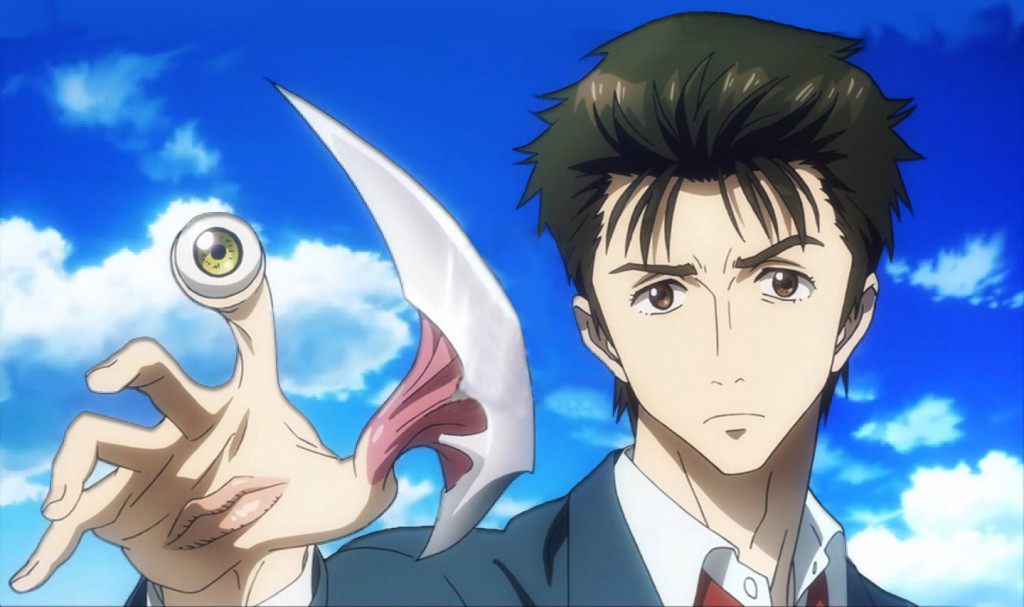 Migi is the parasite that finds its way into Shinichi’s arm and then tries using him as host. Most other parasites have the intention of the ruling the human world by controlling their brains and then eventually killing them. But unlike the other parasites, Migi has no desire to kill humans and is happy residing in Shinichi’s arm. It sustains itself on all the food that is consumed by Shinichi and lives a comfortable life. It has no sense of emotion and shows no compassion towards humans or others of its kind. The only thing it cares about is its own survival and is willing to kill anyone who threatens his secret with Shinichi.

Migi takes its survival so seriously that initially when it takes over Shinichi’s arm, it almost decided to get rid of Shinichi’s other limbs so that there’s no possibility of other parasites taking over. Unlike Shinichi, Migi does not even show any keenness towards risking its own life just to save other human beings. He despises the ones who are similar to him just as much as Shinichi does and eventually decides to work along with Shinichi as long as its self-interest is being fulfilled. 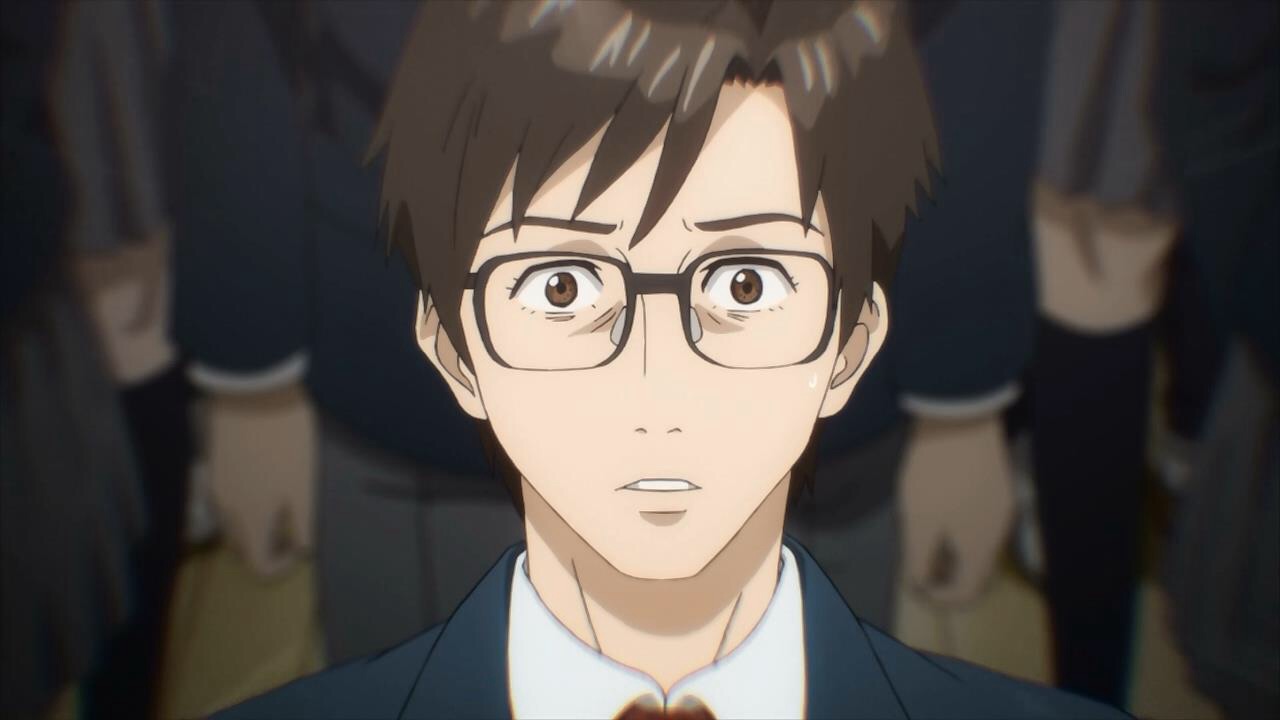 Shinichi is the main protagonist of the series and is just another ordinary high-school teenager until his life completely changes one day. When the brains of the whole world are getting infected by a bunch of alien parasites, Shinichi gets lucky and somehow the parasite that has the intention of getting inside his brain, instead, gets trapped in his arm. What comes as a curse to everyone else is more of a blessing for Shinichi as it makes his arm an indestructible weapon. But before Shinichi can use this against other parasites of the world, he must first come in good terms with his own parasite, who he later names Migi.

Being the thoughtful teenager that he is, Shinichi somehow manages to convince the reasonable creature to co-exist in his body. But Shinichi is now more or less of a superhero who needs to protect the identity of the parasite that lurks inside him so that he can avoid any unnecessary attention from other parasites. He even faces a hard time hiding his true identity from his friends and family after all the stress and grief it causes him.

The irony is that right before meeting Migi, Shinichi used to be a hygiene freak who absolutely hated bugs but now all that’s starting to change as he forms a bond with a creature who might have some emotions after all. The two later even have unreasonable debates wherein Shinichi suggests that the human killings of the parasites are totally unnecessary. To this, Migi replies that even humans kill so many other creatures just for pleasure and no one blinks an eye then. But despite their differences in opinion, they always find common ground and together work in favor of humanity against the ruthless aliens.