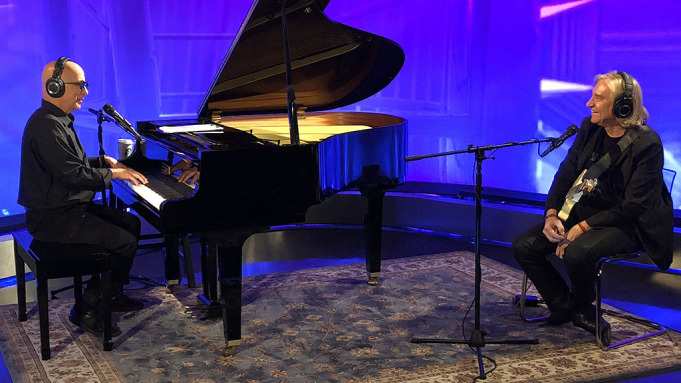 ‘Paul Shaffer Plus One’ is an interview-based, music-themed reality show, which follows the host holding candid discussions with his close friends and music legends. The AXS series is executive produced by Panacea Entertainment’s chairman Eric Gardner, who is also the EP of Paul Shaffer’s radio show on SiriusXM.

Paul Shaffer Plus One Cast: Who’s in it?

Iconic singer, composer, actor, author, and comedian Paul Shaffer both presents and hosts this eight-episode series. The talented musician, who is well-versed in multiple instruments, is well-known for serving as David Letterman‘s musical director, band leader and sidekick on ‘Late Night with David Letterman’ and ‘Late Show with David Letterman’. He is a renowned bandleader and a four-time Emmy nominee.

Paul Shaffer Plus One Plot: What is it about?

‘Paul Shaffer Plus One’ features Shaffer as he holds interviews with leading artists from the music industry while being seated behind his piano. He engages in light yet captivating conversations with these legends, many of them being his close friends. In addition, there are impromptu performances by the musicians on their memorable songs.

This series is an extension of Shaffer’s radio show on SiriusXM and follows a similar format where his fellow music icons reveal their legacies, influences, and experiences. According to Shaffer himself, he is quite excited about the show because it gives him a one-in-a-million chance to go one-on-one with all of his favorite recording artists. They discuss about music and when a certain subject leads to a specific tune, the duo ends up demonstrating a song.

‘Paul Shaffer Plus One’ begins with Shaffer sitting down with Eagles guitarist Joe Walsh as they shed light on the creation of one of the band’s all-time, signature hits, ‘Life in the Fast Lane’. Shaffer starts by saying that this particular number credits three people as its composers, Walsh, Don Henley, and Glenn Frey. So, he asks the reason behind the same. Walsh answers by explaining, “I had this lick that I played that I would warm up for a show with.” It was some kind of coordination exercise between his right and left hand. However, when one day, he was just playing the song during a warm-up session, Glenn entered and enquired: “What the hell’s that!?” Walsh replied, “I don’t know, it’s just a lick I warm up with” — to which Glenn exclaimed, “That’s an Eagles song, dude!”

Highlighting multiple such interesting anecdotes, ‘Paul Shaffer Plus One’ is the ideal addition to AXS’s lineup, that ups the quality of information-rich music programming, which has become signature offerings from the network. As Paul is already a renowned celebrity from his work with David Letterman, an acclaimed and award-winning musician, he is able to attract fans with his grasp on extensive musical knowledge and invaluable insights.

As per Evan Haiman, Vice President of Music Programming and Production, AXS TV, “AXS TV is proud to present the series premiere of Paul Shaffer Plus One.” He added,  “Paul Shaffer Plus One gives viewers a rare glimpse into the man behind the piano, as he sits down with an impressive slate of fellow legends—getting them to open up about their extraordinary lives and careers as only he can.”

Paul Shaffer Plus One Season 1 Release Date: When will it premiere?

‘Paul Shaffer Plus One’ season 1 premieres on AXS TV on Sunday, September 15, 2019. The entire run for its inaugural season comprises eight episodes, with each episode featuring a run-time of 30 minutes. It releases one episode every week on primetime Sunday nights and wraps up with its finale on November 3, 2019. Additionally, it airs on an hour-long format on SiriusXM. It debuts as a part of AXS’s Sunday Night Rocks.

‘Paul Shaffer Plus One’ is yet another addition to AXS TV’s exhaustive roster of classic rock and music-themed titles, that delivers around 200 hours of original programming, which also include ‘Rock & Roll Road Trip with Sammy Hagar‘, ‘Real Money’, ‘Top Ten Revealed‘, and ‘The Big Interview with Dan Rather‘.

Paul Shaffer Plus One Trailer:

Check out the official trailer for season 1 of ‘Paul Shaffer Plus One’ below.