When Erle Stanley Gardner took up writing as a part-time job to make a quick buck while working away as a lawyer, he dabbled in pulp fiction. In recreating his most famous character, HBO has dipped the story in the yellowish tinge of pulp to give you the sense of those ragged magazines with unfinished edges. Though, there is nothing cheap about this one.

The first episode of ‘Perry Mason’ serves as a delightful introduction of the titular character while giving the audience a peek into the gruesome crime, the investigation of which will unfold over the course of the next seven episodes. There are many striking things about it, and each of them gives you an idea of what to expect from the series, of how far it is willing to take the case as well as the detective who finds himself caught up in it.

The episode opens with a mysterious man, a baby, and two scared parents. This was a kidnapping, where 1-year-old Charlie Dodson was snatched from his home, and his parents, Matthew and Emily, had to pay the ransom of $100,000 to rescue him. The kidnappers get the money, but Charlie is not returned in the same condition. The easiest way to say it is that the boy is dead.

The scene then cuts to a diner where Perry Mason and his right-hand man Pete Strickland are following a movie star to find something controversial on him. The tiring pursuit pays off when they not only find enough against their subject but also get another famous personality in the mix. This looks like an excellent opportunity for Mason to make more money and he certainly needs it.

Mason lives in his family house which has a farm, and he is struggling for its upkeep. He is also divorced and tries to keep in touch with his 9-year-old son, but fails repeatedly. He shops for ties in a morgue and delivers his services as a private investigator, but we also get a hint that he will eventually gravitate towards the courthouse. No matter what his condition, we also know that he is good at what he does, which is why, when it comes to solving the case of Charlie Dodson, he is brought on board. 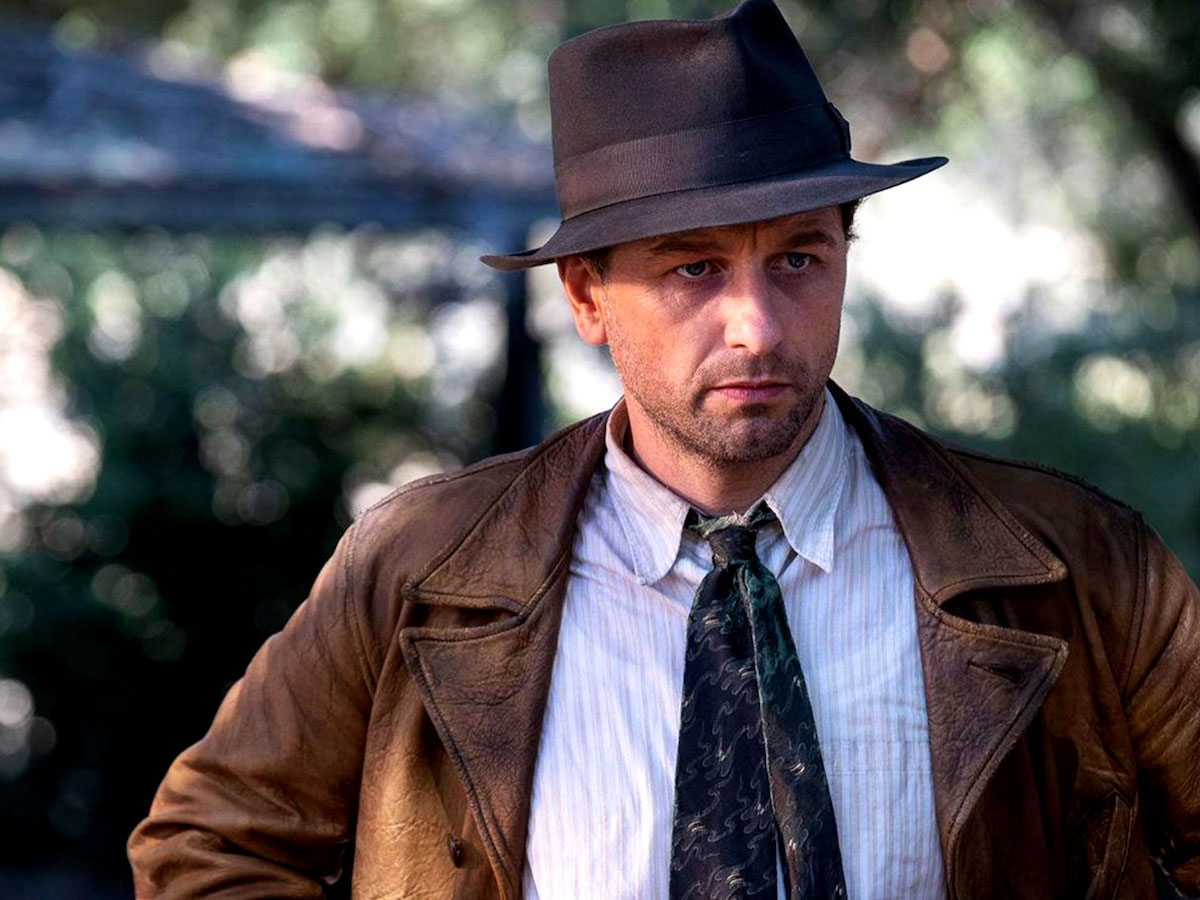 In its first episode, ‘Perry Mason’ gives a balanced mix of everything. It is beautifully shot, in an elaborate reconstruction of 1930s Los Angeles where colors and shadows combine in a strange and alluring manner that gives a distinct look to the show. It also keeps a levity about it. The humor is thrown into the scenes whenever possible, and for a good reason.

The case at the center of this season is a gruesome one and you are horrified within the first couple of minutes of the show. The image of Charlie Dodson’s corpse, with his eyelids sewn up and the color black shadowing all over his body, is, as Virgil says, “the worst thing you’ve ever seen.” With something as sickening as this, the question that immediately pops up in your mind is: why would someone do such a thing? We don’t start wondering about the who and the how of it until the case comes to the attention of Perry Mason, but the why of it haunts us since the first image of Charlie, and that is what the season will be playing at.

By the end of the episode, it gives us the who, or at least, a part of it. This move on the part of storytellers not just emphasizes on the why that we have been wondering about, but also adds more mystery wherein the audience leans further towards the story, anxiously waiting for the next episode to find out more about the suspects and indulge in the guessing game of what actually happened to the boy.

Meanwhile, the episode also distinctly demarcates some territories between the good guys and the bad guys. Interestingly, it also paints the cops as an untrustworthy lot who do not spark confidence. To make their incompetence more visible, it contrasts that with the workings of Mason, focusing on his keen eyes and camera. So, while he is busy picking the right pieces to form the picture, the cops already have their fall guy and give you no doubt that they will be going after them with full force. Considering the current circumstances, this feels more than just a trope for a story that wants to put a private detective at front and center rather than the law enforcement. It is relevant to such a level that when Mason and his client agree on the fact that they couldn’t trust the cops, so does the audience.

Apart from building the case, the episode also focuses on building the characters, all of whom are discrete, bringing different colors in the palette of the show. Matthew Rhys slides into the skin of a man clueless about his life but exceptional at following the clues about the case. Mason’s eyes miss nothing and neither do Rhys’. While the character captures the moments around him with his camera, the actor conveys the emotions through his eyes and gestures. The mix of ingenuity and vulnerability has always been a captivating mix and Mason’s character benefits from that.

All in all, the first episode of HBO’s ‘Perry Mason’ is a great start to a detective show that promises to be different than its counterparts. With a strong lead and a compelling case, it has our attention. The only question is, will it succeed in keeping it?