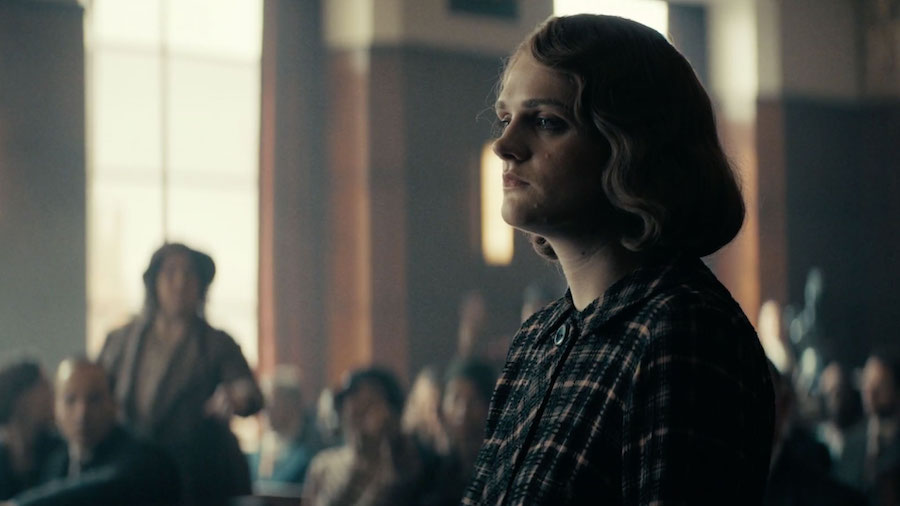 After establishing a basic sense for all the characters in the first two episodes, ‘Perry Mason’ jumps to the other important part of Mason’s story in its third chapter. Fans know him as a lawyer-detective, with the former being a more defining part of his personality. Because the HBO show acts as an origin story for him, we would probably have to wait until the last couple of episodes to see Mason in action in the courtroom, but the show has started to set the pedestal for his big entry scene in what would eventually become his main thing. The story is being geared up for that, by not only giving Mason some of his most valuable allies but also by taking away someone essential ones from his life.

After the love letters between Emily Dodson and George Gannon lead to the woman’s arrest, the contents of them are made public. So begins the media trial of a woman who had an affair with the man who killed her son. While Gannon is held responsible for killing his accomplices and then killing himself out of the sheer weight of sin that had apparently overcome him with guilt, Emily receives a character assassination of her own.

Things get worse when it becomes impossible to get her bail and Herman Baggerly withdraws support, leaving EB and Mason to wonder how they’ll save Emily. With Pete’s help, Mason discovers something important about Gannon’s work and also chases after Officer Drake to question him about the inconsistencies in his report. Emily’s condition worsens, mentally and physically, as her grief and guilt pull her down further. A visit from Sister Alice gives her hope, but when her husband decides to let go of her, things become all the more dangerous inside the jail cell.

E.B Jonathan is near and dear to Mason in a lot of ways. They work for each other and trust each other, which is why there is also a sense of co-dependency between them. However, from what this episode shows us, it wouldn’t be advisable for the audience to care for E.B too much. The confidence and strength that he had displayed in the previous episodes witnesses a landslide fall this time around. He fumbles with lines, is caught off-guard in the courtroom, is losing friends in all places, and has reached a point where he feels hopeless and helpless, and hence, gets all our sympathy. It is also clear that he is getting sicker by the day, which is why he has been losing touch, and by the time this case comes to a close, it wouldn’t be him standing beside Emily Dodson and saving her from the sentence of a noose around her neck.

As E.B weakens and prepares for a difficult fall, we see Perry Mason rise and take another leap closer to figuring out what happened to Charlie Dodson. He does feel bad, if not guilty, for the way things escalated for Emily Dodson, who is being crucified for a crime that she didn’t commit. Her situation is also worsened because of what her father-in-law calls “degenerate femininity” and has already been put on a media trial and found guilty, despite the lack of any concrete proof against her, apart from the fact that she had an affair. Rightly so, Della wonders why she is being given more flak as compared to her gambling husband, who admits he came home mean sometimes and is probably why she sought love somewhere else.

While Emily suffers in jail, Mason chases after Officer Drake who receives a bit of friendly advice from Detective Ennis to stay away from the PI. Drake’s tug-of-war between doing what’s right and keeping his head down is brought to the fore with Chris Chalk’s keen display of emotions. We see the need to be a good police officer bubbling up inside him, while his hard exterior tries to stay out of trouble and keep his family safe in the process. Of course, we know he’ll come around sooner or later, but watching him caught up in the internal tussle of his moral dilemma adds more depth to the story.

Apart from the investigation, corruption, and legal angle, the show also keeps the religious factor running parallel to everything. Sister Alice also seems torn between wanting to be there for Emily and being advised by her mother to keep a distance from her. Unlike Drake, whose motivations are clear to us and whom we trust, Sister Alice is still a puzzling piece in the whole picture. Apart from both the victim and the culprits being connected to her church, how else is she a part of this story? What makes her so important as to get so much screen time, apart from the fact that Tatiana Maslany is just as enigmatic in this role as any other? Why is the audience being familiarised with Sister Alice so closely?

These questions had been popping up every time she appeared on the screen, and the ending scene promises to give a new twist to the story through her presence in the next episode. When she goes into an epileptic fit, which is apparently how God converses with people, and comes out of it to tell everyone that she’ll be resurrecting little Charlie, we wonder if she means that literally or is there some other philosophical or spiritual meaning to it. Only the next episode will tell.