Peter From The Great British Baking Show: Everything We Know

‘The Great British Baking Show’ (also called ‘Bake Off’ in the UK) is a rather quaint and enjoyable baking competition. 12 amateur bakers come together under the iconic white tent to recreate some yummy sweet treats in a series of challenges set forth by the judges. Peter Sawkins is one contestant on this season of the show, and you can learn more about him in this article.

Peter is currently 20 years old and hails from Edinburgh. He is also a student of Accounting & Finance at the University of Edinburgh. He is an ace on the badminton court and has, in fact, represented his country in the sport since 2012.

Interestingly, the previous seasons of the show are what inspired Peter to start baking in the very first place. He was just 12 when he tuned in to ‘Bake Off’ and since then, has continued to bake for himself and his family. He also loves incorporating Scottish ingredients like berries, whisky, oats, and honey in his recipes.

When asked about his favorite memory in the first week of the show, Peter stated, “Just being in the tent with the judges, presenters and other bakers and realising that I was ON THE BAKE OFF!” By appearing on this season, Peter has, indeed, come full circle, and we cannot wait to see his talents on the screen in the coming weeks.

Kicking off the series was cake week. The first challenge had the contestants making a Battenberg. Peter used a chocolate sponge and also a pureed orange sponge for his rendition of the dish and wrapped it in polka-dotted marzipan. It was the only gluten-free version presented to the judges. He mentioned that he learned a trick from season 3 that involves listening to the food item to check if it is cooked. But Peter stood out from the very beginning since he was the only one that timed how long the cakes took to bake. Considering that the entire dish relied on those, it was a wise decision. Prue and Paul loved the dish and complimented both its appearance and its texture. Peter, too, was happy with his performance. 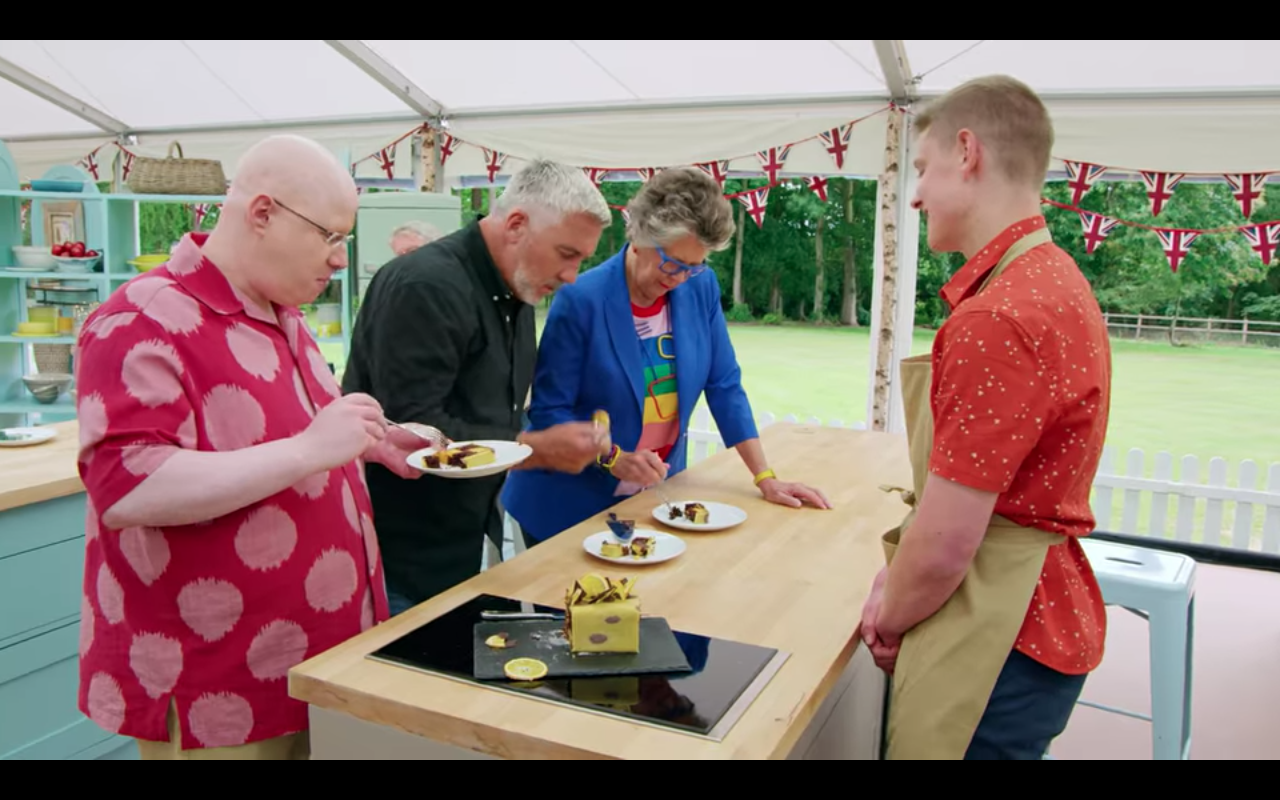 Next up were the dainty pineapple upside-down cakes. This was also the technical challenge of the episode. With a dish where many elements could go wrong, Peter’s penchant for accuracy really helped him recreate a well-made dish. Other contestants faced many problems such as burning the caramel, but the accounting student wowed the judges yet again. He ranked second. Prue even stated that the dessert was pretty faultless, but was just a smidgen below the winners’.

Last but not least, the contestants had to recreate a 3D bust of their favorite celebrity hero mostly with cake. Peter chose Sir Chris Hoy, an Olympic medalist in the field of cycling. The judges felt that he had made a clever decision as Peter did not have to do the hair and eyes (since the bust used a helmet and goggles). Prue was a little worried that the cake may have lost its structural integrity a bit because Peter used fresh cream with the sponge cake. But in the end, both judges were a massive fan of his rendition. After these back to back stellar performances in just one episode, is it even a surprise that Peter went on to win the Star Baker for the week? He has definitely proved his mettle on the show, and we cannot wait to see what scrumptious food he will recreate in the tent next.

Peter raced his way to Star Baker with a brilliant Battenberg and a gold medal worthy Showstopper. Congratulations, Peter! #GBBO

Read More: Where is Nailed It! Filmed?