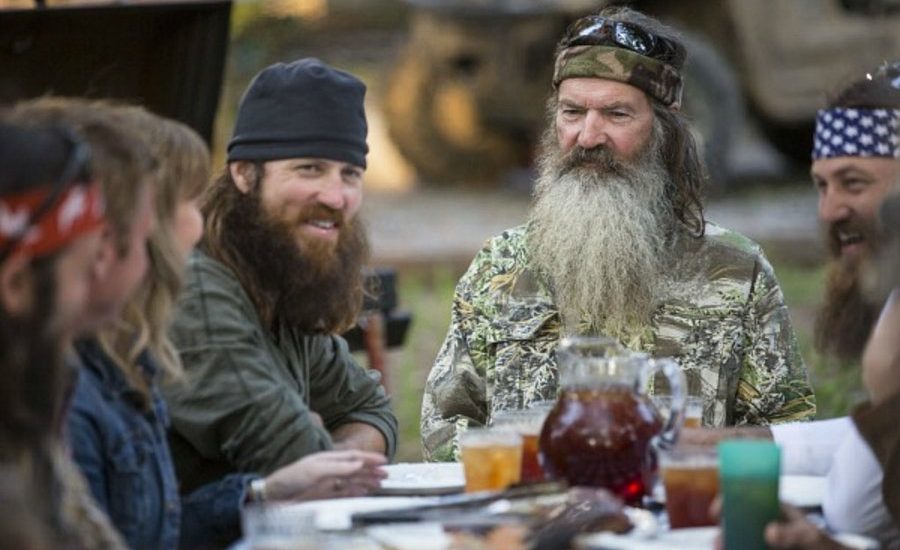 The star of ‘Duck Dynasty’ and the founder of Duck Commander comes from very humble beginnings. Born on April 24, 1946, in Vivian, Louisiana, Phil Alexander Robertson was the fifth of seven children of Merritt and James Robertson. His siblings include four brothers: Jimmy Frank Robertson, Harold Robertson, Tommy Robertson, and Silas Robertson, along with two sisters: Jude Robertson and Jan Robertson.

There was a time in his life where he lived without electricity, running water, or even a toilet, but he still had a very happy childhood because of the way he and his siblings were raised. Instead of going to the grocery store, the family used to consume the produce they grew in their garden and had the meat from the animals they raised and hunted. Even though Phil has come a long way from his beginnings, he hasn’t left his roots and still resides in Louisiana with his entire family.

Phil and his wife Marsha Kay Carroway Robertson, also known as Miss Kay, were high school sweethearts, they began dating in 1964 and got married two years later on January 11, 1966. He hasn’t been shy about mentioning that he lived a quite boisterous life before he found the path of faith and religion, which, unfortunately, caused problems in his marriage.

Jan 11 just keeps getting sweeter!! Happy Anniversary @realwilliebosshog AND Happy Birthday @babyzaneloflin We absolutely adore you! You make life so much fun, you keep us laughing and dancing and appreciating all the good things in life. Can’t believe you’re 1!! Willie, Here’s to many more adventures (and grand babies 😉) together! Feels like we are just getting started on our great love story. All the ups and downs brought us right here. Here’s to 28 more and then I’ll take another 28 if God will let us! Tennis partners till we die ❤️K Newlyweds, never forget nothing truly great is ever easy, keep going!!

In the book “The Women of Duck Commander” that was published in 2014, Marsha talked about how she had hoped that after college, when Phil could get away from his friends, he would be able to change his lifestyle and get better. But, that didn’t happen for years, and instead of getting better, things got worse as time went on. Phil’s drinking and his entire lifestyle even led the couple to be separated from each other for a while.

However, when he found his religious awakening and became an active member of the church, he and Marsha were able to reconnect and overcome all their obstacles. Ever since then, they have had a rock-solid marriage, and it has been going strong for more than 54 years now.

Phil Robertson is the father of five children. He has four sons with his wife Marsha and a daughter from outside of marriage, whom he didn’t even know about until recently. His sons are Marshal Alan Robertson, born January 5, 1965, followed by Jason Silas “Jase” Robertson on August 16, 1969, and Willie Jess Robertson (CEO of Duck Commander) on April 22, 1972. Last but not the least, is the youngest son Jules Jeptha “Jep” Robertson, who was born on May 28, 1978.

Alan is the only member who is not a part of the family business, as he left it to become a preacher. He was also the family member who first found out about the existence of his sister. In his father’s podcast “Unashamed,” he explained how he had gotten a letter from someone who took a DNA test and thought that Phil might be her father. Although he initially dismissed it because of her date of birth, after a while, he started looking more deeply into it, just for the sake of helping her out. When DNA results confirmed that she, Phyliss, 45, is, in fact, his sister, he went ahead and told the family.

Phil’s philanderer ways were no secret, but it had to have been a shock for the family when they found out that he fathered another child by cheating on his wife. However, they have met Phyliss and have embraced the new addition to the family with open arms. As for Phil and Marsha, well, their relationship remains intact.

“DNA results are back, and…I have a sister.” Words I will never forget my husband say as he stepped back in beside me at a worship conference just 3 short months ago. The next few moments were emotional as we continued to praise and worship an amazing Father and Savior. The last few weeks have been even more amazing as we have been blessed to spend time with our new family members. God can make the most beautiful things out of our brokenness. He is the Redeemer! Welcome Phyllis and Tony, Grant and Julie, Joel and Kendall! You are loved ♥️💕♥️

So good finding my long lost sister. Can’t wait to share life with y’all’s family. Welcome to the nuttiest family around. [link in bio to hear us tell the story]

Phil is not just a father; he is also a grandfather and great grandfather. He has a total of 16 grandchildren from his four sons and five great-grandchildren that come from them.

How did this happen?!? I ask myself that question all the time when I look at this family of ours. Our growing kids, our grown kids and now our grand kids!! Sometimes I think it is just by absolute miracle, pure magic, straight blessing, and other times I think it happened with of a lot of hard work, yes to this and no to that, consistency, failure and getting back up, forgiveness, faithfulness. ⠀ It’s BOTH. Our marriage and each of our children are nothing short of miracles, the best gifts from God, and also hard fought, hard won. Yes, we stayed in there AND God’s grace covered all of our mistakes and inadequacies and continues to. ⠀ I don’t have the whole answer to how this happened, but I know this, when I look at these faces what I see most of all is love. This family was created by Love, because of love and for love. We exist to love God and others. And LOVE makes things happen ❤️ ⠀ 📷@jaydaiye thank you for capturing our family so beautifully

Read More: Where Is The Robertson Family Now?