What Is Phil Robertson’s Net Worth? 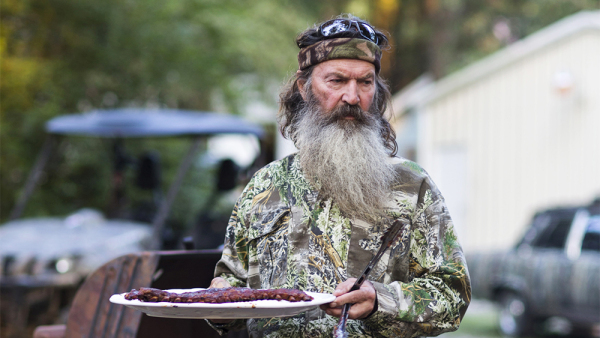 Phil Alexander Robertson is an American professional hunter, businessman, and reality television star. Before he took his passion for hunting to the next level and became a famous businessman with his company Duck Dynasty, the native was first a teacher. Wondering how much the ‘Duck Dynasty’ star is worth? Read on.

How Did Phil Robertson Earn His Money?

Phil Robertson was athletic from a very young age. His all-state position in football, baseball, and track helped him get into the Louisiana Tech University in Ruston on a football scholarship. After that, because of how well he played, he was even approached to play professionally, but he declined as it would conflict with the hunting season and therefore hinder him from doing what he loved. Phil graduated with a bachelor’s degree in physical education and later received a master’s degree in education.

Following this, he spent several years as a teacher before becoming a commercial fisherman. In the 1970’s he even ran a bar. In 1972, because he wasn’t satisfied with the available duck calls, he created his own, and within a year, he received the patent for this call and incorporated the Duck Commander Company.

His business blossomed so much that he had his family – wife, brother, and four sons – helping him out. And now, with all their help, Duck Commander is thriving so much that it is a multi-million dollar business empire that includes DVDs, merchandise, books, and much more. The business became so popular that the family even landed their own reality show on A&E by the name of ‘Duck Dynasty.’ This series has aired 130 episodes spanning 11 seasons.

After gaining success on his own show, Phil was also featured on the television show ‘Duck Commander,’ which is a hunting program on the Outdoor Channel. Along with this, he has also written a memoir by the name of “Happy, Happy, Happy,” which was a #1 bestseller and has sold around a million copies to date.

Now, Phil Robertson earns his money from hosting his podcast by the name of “Unashamed with Phil Robertson.” Instead of just his family members, other special guests are also featured on this podcast, and together they talk about faith, life experiences, and family.

Even though Phil was in hot waters with the media and the public briefly in 2013, when some of his comments came off as homophobic, he was able to bounce back into his life in the spotlight. Thanks to all his hard work throughout his life and career, Phil Robertson has an estimated net worth of $15 million as of 2020.