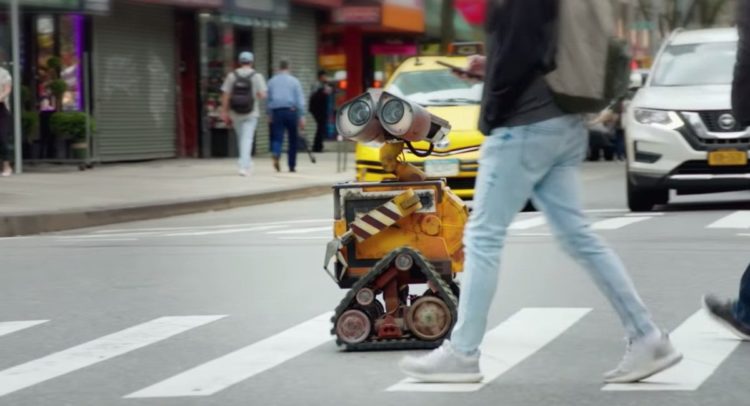 Have you ever wondered how would you react if ever your favorite Pixar characters came to life? Revolving around this very scenario is ‘Pixar In Real Life’ or ‘Pixar IRL’, a reality tv show, where some of the most lovable Pixar characters from fan-favorite animated films hit the roads — surprising pedestrians and indulging in fun shenanigans.

Pixar IRL Characters: Who is in it?

The stars of ‘Pixar IRL’ are some of fan’s most beloved Pixar characters, who have been created using live action 3D performers. Among the characters, we meet Dash from ‘The Incredibles‘, ‘Wall E’, and Russell from ‘Up’, among others.

Pixar IRL Plot: What is it about?

‘Pixar: In Real Life’ can be dubbed as a cosplay series, with the only difference that the transformations are executed by real professionals. Here, popular Pixar characters are given makeovers from computer-generated 3D creations to live-action 3D performers. The creators then surprise unsuspecting folks with these creations and record their hilarious reactions after the encounters.

The short-form series takes a break from the usual charade of costumed characters parading theme parks. Instead, they actually interact with people and take them by surprise. For instance, in one scene, we witness Dash making a sprint around a huge building in record time — leaving onlookers aghast. Again, we see Hank the octopus from ‘Finding Dory’ riding a stroller, the CDA agents from ‘Monster Inc’ donning hazmat suits, a certain type of feelings controller from ‘Inside Out‘, Wall E crossing the road and clearing trash, and Russell from ‘Up’ wrapped up in his full gear.

‘Pixar IRL’ has all the elements that makes it an endearing show. It contains our favorite characters, with whom we have grown up, fallen in love, and for whom we care about. It is a genius idea from Disney since it relives these beloved characters by transporting them out of their animated dimensions and then presenting them before people. Although the onlookers meet them for a brief period, they still get those feels of how it would be if their favorite heroes would be out and about in the real world.

We guess, you can already imagine the reactions of passersby when they witness a sentient robot clearing trash or a small boy making rounds around massive buildings in seconds. The magical moments created by the producers in this show end up not only enchanting kids but also surprising adults. The most attractive quality about ‘Pixar IRL’ is that there are no similar shows which embrace this unique concept of introducing a sense of reality to Pixar’s dearest animated characters. Yes, it is something distinct and fun but how long it will be able to hold the attention of viewers still remains to be seen.

Pixar IRL Season 1 Release Date: When will it premiere?

‘Pixar IRL’ season 1 premieres on Disney Plus on November 12, 2019. It lands on the same date as the launch of Disney’s streaming platform, Disney+. Other titles that join its inaugural session are ‘Forky Asks a Question‘ (where the breakthrough, titular character from ‘Toy Story 4′ has an unending list of questions for his buddies) and ‘Pixar Spark Shorts’ program, showcasing a collection of engrossing short films by upcoming animators.

‘Pixar IRL’ is one of the several titles introduced by Disney Plus to entertain viewers and to build a strong and loyal fanbase. We hope that the series gains enough traction to remain for a long term on the channel as and when Disney+ joins the ranks of other streaming giants. Additionally, there is a huge content base to keep ‘Pixar IRL’ on air for multiple seasons. But whether it attracts enough fans to keep it going will be revealed only after Disney+ records the responses, ratings, and viewership numbers, once the show is released on the platform.

You can check out the official trailer for ‘Pixar IRL’ season 1 below: