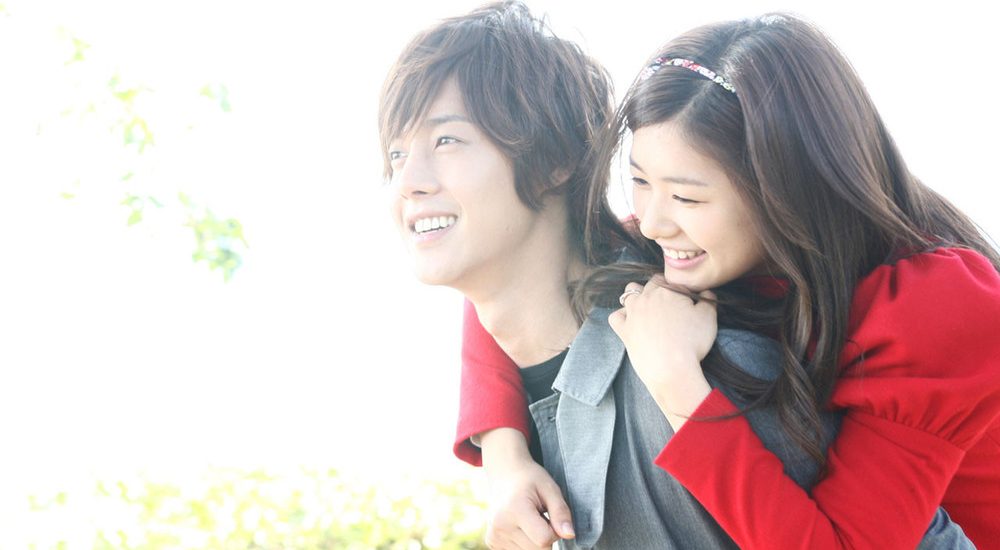 ‘Playful Kiss’ AKA ‘Mischievous Kiss’ or ‘Naughty Kiss’ is a Korean romantic drama that premiered on MBC in 2010. Written by Go Eun-nim and directed by Hwang In-roi and Kim Do-hyung, it is an adaptation of the Japanese manga, ‘Itazura Na Kiss’, written by Tada Kaoru. In fact, it is the third series that is based on the manga, after the Taiwanese title, ‘It Started with a Kiss’ and its sequel, ‘They Kiss Again’.

Playful Kiss Cast: Who is in it?

One of Korea’s biggest Hallyu stars, Kim Hyun-joong, is best known for his performance on ‘Boys Over Flowers‘. He plays Baek Seung-jo, the smartest and most good-looking boy in high school. It is said that his IQ level is 200. However, he is cold and distant. Ha-ni sends him a love letter, pouring out her feelings — which he rejects after grading it and specifying that he has no interest for dumb girls. Later, after Ha-ni and her father shift to stay with his family, he gets to know her better and eventually starts falling in love. Afterwards, he decides to abandon his goal of inheriting his father’s property and concentrate on becoming a doctor instead

Jung So-min (‘What’s Wrong With Secretary Kim‘) stars as Oh Ha-ni, a not-so-bright, clumsy girl who struggles with her grades. She has been obsessed with Baek Seung-jo from the past three years. One day, Ha-ni decides to shed her inhibitions and finally ends up writing a love letter and sends him to it — which Seung-jo publicly rejects, pointing out grammatical errors. Ha-ni is dejected and humiliated and stops pursuing him. However, as fate could have it, her newly constructed home collapses after an earthquake, because of which she and her dad move to the house of the latter’s childhood friend — who is coincidentally Seung-jo’s father. Seung-jo continues his cold attitude but they slowly grow closer. Oh Ha-ni ends up marrying Seung-jo and decides to become a nurse.

Lee Tae-sung plays Bong Joon-gu, Oh Ha-ni’s admirer since the first year of high school. He loves her deeply and continuously supports and helps her — hoping that one day she will reciprocate his feelings. He is heartbroken when he discovers that Ha-ni and Seung-jo are in a relationship. Yet, he still does not give up hope until she marries Seung-jo. Later, he meets a girl called Chris who has a crush on him. Eventually, they start dating. Lee Si-young is Yoon Hae-ra, a smart, beautiful girl, good in almost all extracurricular activities. She is Baek Seung-jo’s female equivalent. She has a crush on him in college, but later decides to move on after finding out about Seung-jo and Ha-ni’s marriage. Afterwards, she falls for Kwang Kyung-soo, the tennis club’s vice-president.

Playful Kiss Plot: What is it about?

‘Playful Kiss’ is a heartwarming romantic comedy that follows the love story of two polar-opposite individuals. While Baek Seung-Jo is a proud, cold genius, and an A-grade student, Oh Ha-Ni is a scatter-brained young woman, who consistently gets F grades and is at the bottom of the class. She has harbored a crush for Seung-Jo from the first year of high school and one day, decides to convey her feelings via a love letter. But he publicly humiliates her by returning a graded letter.

Embarrassed and heart-broken, Oh Ha-Ni goes back home and on the same day, her house collapses on her family and three friends. Ha-ni’s dad gets invited to stay with Baek Seung-Jo and his family as Seung-Jo’s father is his friend. After they start living under the same roof, Oh Ha-Ni,  continues to pursue her love. But eventually, she gets dejected with his continuous cold and uncaring attitude. Bong Joon-gu, who also likes Ha-Ni, asks for her hand in marriage. This is when Seung-Jo realizes that he might lose her and starts chasing her to win back her affection, once again.

Playful Kiss Season 2 Release Date: When will it premiere?

‘Playful Kiss’ season 1 aired on MBC on September 1, 2010. It consists of 16 episodes and wrapped up with its finale on October 21, 2010. It aired on Wednesdays and Thursdays at 21:55 during its run-time for the first season. After its release, the k-drama received low ratings, within the five to seven percent range. However, it was sold to 12 Asian countries, where it was branded as a cult-hit show. It was streamed for more than 70 million times on Viki. Because of its massive response on the international platform, it was developed into a short special edition, comprising seven episodes, that was released on YouTube after the season finale.

Now, as far as a second season is concerned, we do not have an official update from the network. It looks unlikely that there will be another season. But if we hear anything about ‘Playful Kiss’ season 2, we will update this section.

There’s no official trailer of ‘Playful Kiss’ available, but you can head to show’s official website if you wish to check out episodes of season 1.