Where to Stream Playing With Fire? 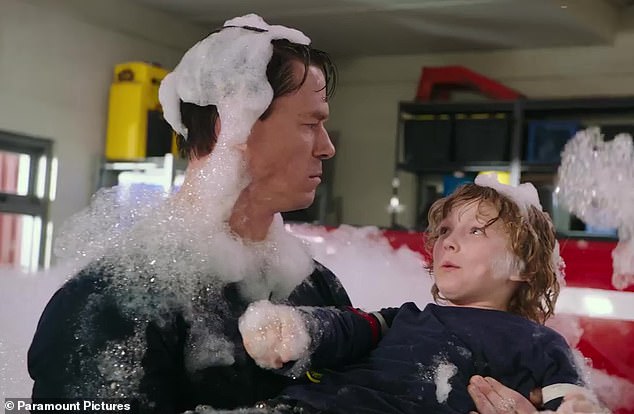 Kids are adorable. They do and say the cutest things, and if you are really reading into it, they symbolize the future of mankind itself. However, underneath their innocent facades, some kids might drive you insane and even terrorize you with their naughtiness. ‘Playing with Fire’ explores just how tough it can be to handle kids, even for people who are adept at handling the most dangerous situations.

The family comedy comes from Andy Fickman, based on a screenplay by Dan Ewen and Matt Lieberman. The basic premise follows a group of firefighters who have to watch over three children who have been separated from their parents after an accident. It should be easy handling kids for sometime before their parents arrive. However, the firemen soon realize that it is nowhere close to being as easy as it looks. They are frightfully out of their depths and realize that despite having literally run into burning buildings earlier, this is the first time they are playing with fire, as the movie’s title suggests.

All said and done, the premise assures us that it will be entertaining and with the inclusion of actors like John Cena and Keegan-Michael Key, ‘Playing with Fire’ is aiming for the humor quotient as well. You must be wondering where you can see the movie. Don’t worry, we have got you covered. However, before we tell you where to watch it, let us walk you through the plot of ‘Playing with Fire’.

What is Playing with Fire About?

‘Playing with Fire’ follows the story of a group of rugged firefighters who ultimately meet their match when they end up rescuing a group of boisterous young children. The movie’s comedy stems from the fact that the firefighters exude an air of capability. They are well built, they are gruff and speak from a position of authority. They usually risk their lives and are adept at handling different situations, some of them potentially deadly. Life throws them a curveball, however, when they go up against the children. Now, children usually flout authority, choosing to do as they please. It is a part of the growing process where they do not recognize authority figures, and the firemen realize this soon enough.

The movie plays out predictably enough with ‘Supe’ (Cena) carrying out a daring rescue at the start. He is lowered from a helicopter into a burning cabin and brings out the three kids. They inform him that their parents are away. Since an approaching storm prevents the firefighters from taking the kids to the hospital for the mandatory checkup, they make the decision call to wait out the storm at their fire station, since the kids appear to be alright. This sets off a series of hijinks that the kids indulge in, driving the firefighters mad.

Cena’s character ends up covered in noxious substances, and some of the kids’ pranks are potentially dangerous, involving a nail gun. However, the firefighters and the kids begin to bond, and there are some touching scenes where they pull out all stops to help a girl enjoy her birthday party. The movie offers to reinvent the burly firefighter image to show that they are soft inside. Thus, we have Cena’s character riding a tiny pink bicycle and wearing a ‘My Little Pony’ tee that becomes a crop top. However, the actors ensure that their performances balance out the humor and emotions in the movie.

Young audiences are bound to relate to the kids, who share some of their more vulnerable moments when they are not getting up to all sorts of mischief. Adults are bound to relate to the firefighters who face situations with quiet resignation. Altogether, the movie really echoes the wonderful relationships kids forge with grownups and delivers a fair share of laughs as the fire station becomes the scene mischievous pranks. Now, without further ado, let us tell you where you can watch ‘Playing with Fire’.

Is Playing with Fire on Netflix?

Netflix has firmly established itself as the premier content provider, and the platform justifiably tries to cater to a wide range of audiences who have diverse tastes. While ‘Playing with Fire’ is not on the platform, you can check out ‘Kindergarten Cop 2‘, which is another installment in Hollywood’s long tradition of deriving humor from interactions between burly men and kids.

‘Kindergarten Cop 2’ follows an FBI agent who goes undercover in a school, soon realizing it is more than what he bargained for when the school’s liberal progressiveness challenges many of his conservative practices.

Is Playing with Fire on Hulu?

Hulu is easily one of the best content providers out there. The platform keeps making smart additions to its library in order to stay ahead of its competitors. This is what sets Hulu apart for its numerous subscribers. While you cannot stream ‘Playing with Fire’ on the platform, you can check out ‘Anger Management‘, which is bound to have you laughing in no time.

Is Playing with Fire on Amazon Prime?

Amazon Prime is fantastic when it comes to their library, due to the variety of content available, not to mention the sheer volume. It is easily Netflix’s closest competitor. Prime subscribers might not be able to stream ‘Playing with Fire’ on the platform just yet, but you can check out ‘The Big Sick‘, a wonderful romantic comedy, in the meanwhile.

Where Can I Stream Playing with Fire Online?

Unfortunately, you cannot stream ‘Playing with Fire’ online elsewhere at the moment. You have to wait till it arrives on other platforms, which might take a while.

Is Playing with Fire Out on DVD and BluRay?

‘Playing with Fire’ is not out on DVD or BluRay just yet, and it does not seem to have a tentative release schedule announced either. You have to give it a couple of months before it becomes available.

Can I Stream Playing with Fire Online For Free?

Sorry freeloaders, you have to wait till ‘Playing with Fire’ arrives on a platform with a free trial period if you want to watch without paying. However, it is running in theaters at the moment if you wish to catch it. We urge readers to pay for all the art they consume.

Where is Brookfield from ‘When Hope Calls’ Actually Located?