Are Poppy and Luke From Married At First Sight Still Together? 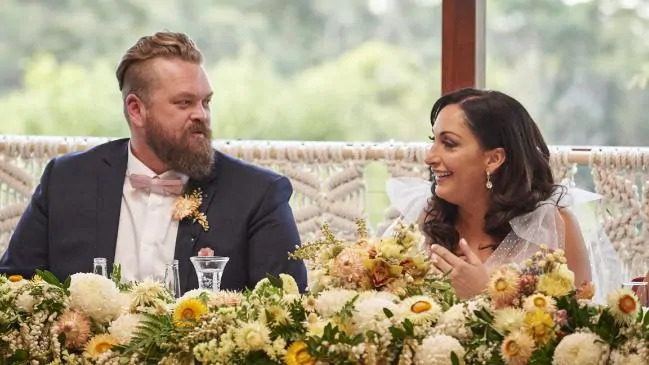 ‘Married At First Sight’ has been entertaining us with new relationships, drama, and romance for quite a few years. Like the American version of the series, the Australian edition is also based on a Danish series of the same name titled ‘Gift Ved Første Blik.’ Now that the seventh installment of the latter has appeared on Lifetime, we see even more tumultuous relationships, just from a different part of the world.

Poppy Jennings and Luke Eglin’s relationship was one such relationship, and if you’re wondering what exactly happened between them or where they are now, then keep reading, because we have all the details for you!

Poppy Jennings, a 38-year-old mother of twin boys, has had her fair share of heartbreak, so when she got paired up with a single father of two teenage daughters, who was the same age as her, we all thought that the matchmakers had struck gold. Both individuals’ priority was their family, and they were genuinely looking for someone to be their partner forever, so they seemed perfect for one another.

Their relationship started out great; their wedding ceremony was romantic, they seemed to have a spark, and we all were rooting for the couple. However, even though both Poppy and Luke chose to “stay” during the first commitment ceremony, she walked out on her television “husband” less than 24 hours later, leaving the producers of the show to tell him that she’d left him and the experiment, and gone back home.

Still so many messages coming through about my wedding dress. I bought it from the amazing Connie @accapellabridal and the brand is @lanestaofficial

It looked like Poppy regretted leaving her children alone and couldn’t bear to stay away from them for a moment longer, so she packed up her bags and left within just a few days into the experiment, leaving Luke alone to handle everything else. Since Poppy left, Luke had no choice but to leave as well. They were the first couple in the season who broke up and went their separate ways.

Are Poppy and Luke Together?

No, they are not. The couple never reconciled, and from the way things are, it looks like they never will. After their time on the show, the photographer took to Facebook and talked about how the series showed nothing of what really happened between the couple in a since-deleted post. She said that Luke was not what he appeared to be on camera and that she felt uncomfortable being around her partner.

Poppy has since revealed that an “incident” had occurred. The pair were engaged in a massive argument behind the scenes during their time together, an argument we never got to see, which led to her breaking point and her decision to leaving the experiment. When Luke was asked about the incident and his relationship with Poppy, he told The Daily Telegraph, “‘I am not going to make any comments [on Poppy’s allegations] because, honestly, the best way to react is not to react. To be honest, Poppy is a good person and the best of luck to her. I am not going to comment on anything because it is not worth it, it really isn’t.”

He even added that he has since moved on from his relationship with her and from the experience of the show itself and that she just needs to do the same. And it seems to be true, because from his social media account even though he remembers his time on the show and has posted images from it, he doesn’t seem too hung up or bitter about Poppy and how his relationship turned out. He looks extremely content with the single life that he is currently living.

Remember when eyebrow piercings were cool and you thought it would heal and go away…? 🙄🤷🏼‍♂️🤦🏼‍♂️😂🧔🏼#vonzipper

Poppy, on the other hand, has been focusing on herself, her kids, and her family. She has been working hard on her career, and true to her outspoken personality is standing up for what she believes in. She recently created a cameo account that is open for bookings and is giving all the proceeds from it to an animal care center.