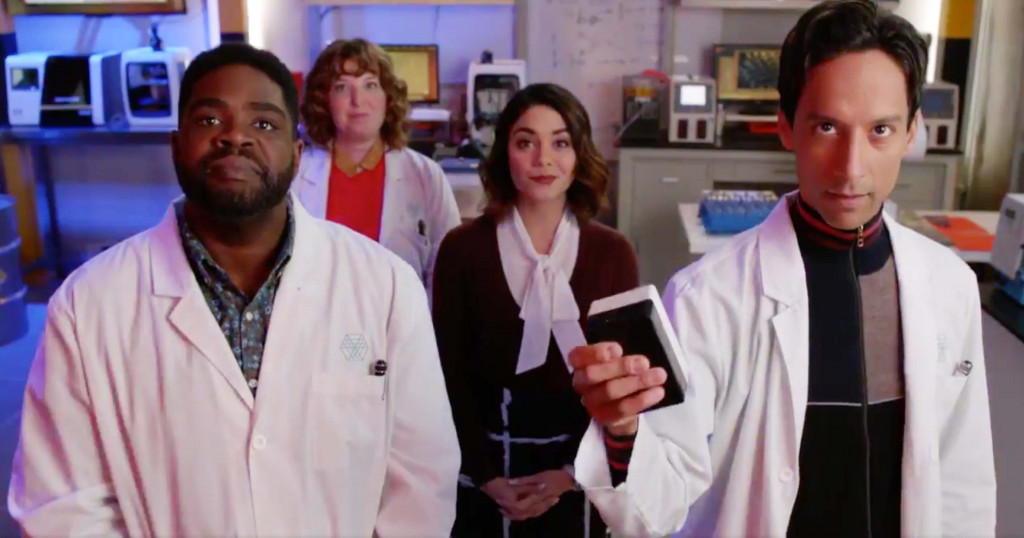 Being a superhero is awesome. But, being a normal human in the world of superheroes sucks. Not only because you are one of the unexceptional lot and will never have any adventures like them, but also because when words like “casualty” and “collateral damage” are uttered, it’ll be for your description. People rarely think about this while enjoying a superhero movie. ‘Powerless’ was meant to rectify this situation. Developed by Ben Queen (‘Cars 3’, ‘A to Z’), this show is set in DC Universe, where figures like Batman, Superman, Aquaman, Joker, and all the other people with unimaginable powers exist. It follows the story of a woman who is made in-charge of a company that is supposed to develop security measures for the general people.

Powerless Cast: Who’s in It? 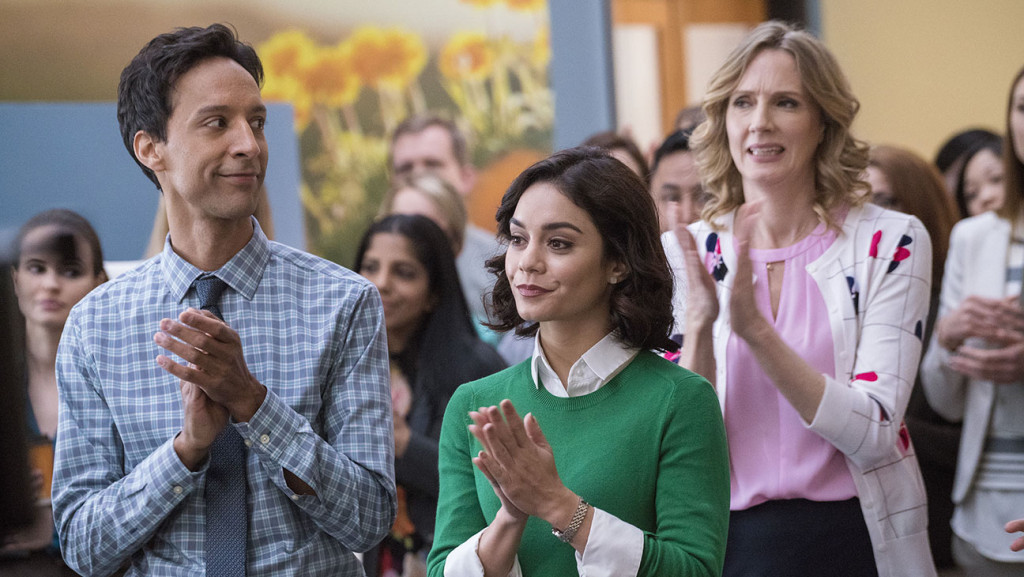 The cast of ‘Powerless’ gives way to some fresh faces as well as some familiar ones. It also has some veterans of the DC Universe in small roles. For example, Adam West, the Batman of 1960s, gives a voice-over in the first episode, giving an introduction of the characters and the company they work in. Marc McClure, who took on the role of Jimmy Olsen in the late 70s and early 80s, plays Emily’s father.

The main cast is headed by Vanessa Hudgens. She plays the role of Emily Locke, a strong-willed and resourceful woman who wants to change the current state of Wayne Security. Hudgens is not a strange face to the people who grew up with Disney’s ‘High School Musical’ series. She has also appeared in Netflix’s ‘The Princess Switch’, ‘Machete Kills’, ‘Journey 2: The Mysterious Island’, ‘Sucker Punch’ and ‘Beastly’. She has also worked in Broadway.

The role of Teddy is played by Danny Pudi. He is a tiresome person who has grown used to wasting his time at the job. But when Emily spurs things up, he has to adapt accordingly. Pudi is known for his roles in ‘Community’, ‘The Knights of Badassdom’, ‘Gilmore Girls’ and ‘Trip Tank’. Christina Kirk plays the role of Emily’s assistant, Jackie. Kirk has appeared in films like ‘Melinda and Melinda’ and ‘Love Is Strange’.

Ron Funches plays the role of Ron, a normal employee on the outside, but to the ones who know his secrets, he is from Atlantis. Funches has also worked in ‘Undatable’, and ‘Kroll Show’. Alan Tudyk plays the role of Van Wayne, Bruce Wayne’s cousin, who wants to foil Emily’s plans of reviving the company because he wants to leave Charm City for Gotham. You might recognise Tudyk from his roles in ‘I, Robot’, ‘A Knight’s Tale’, ‘Rogue One’ and ‘Maze Runner: The Scorch Trials’.

Powerless Plot: What’s It About? 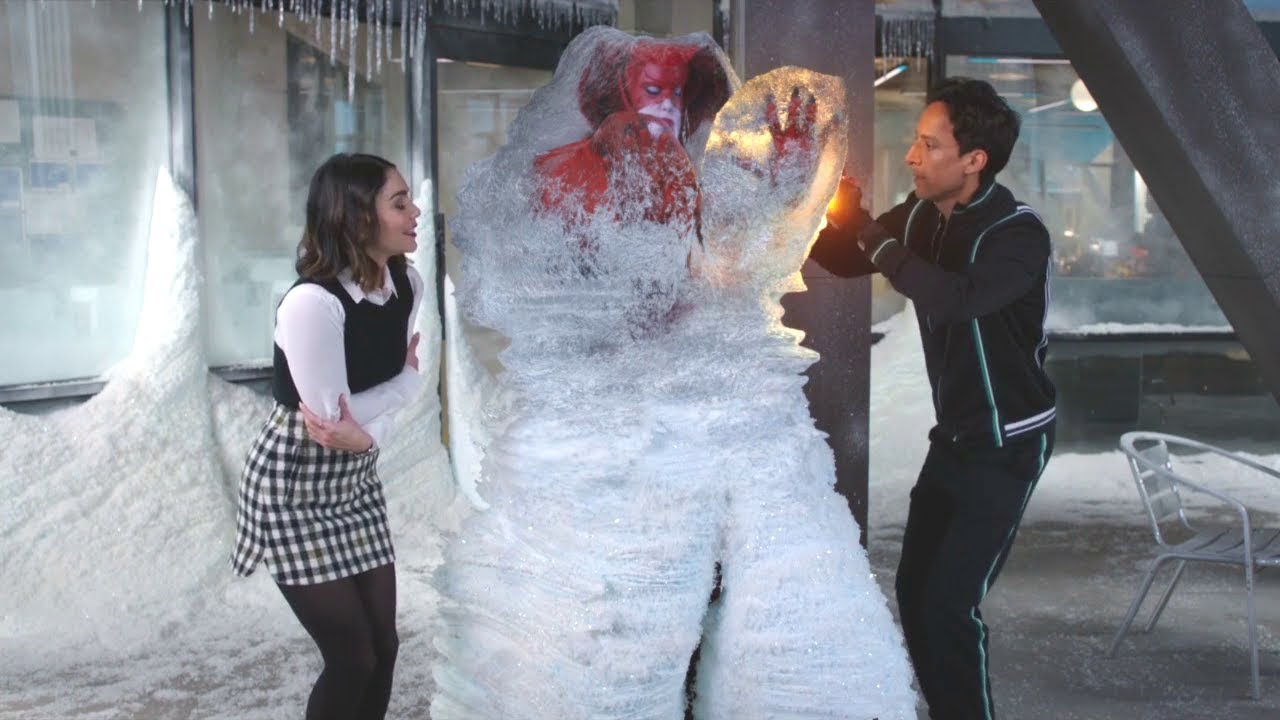 The story and characters of ‘Powerless’ come from the DC Universe. However, it is not at all related to any other DC show on television right now. It acknowledges that it is in the same world as that of Batman and Aquaman, but it is not related to any of the movies. The story is set in Charm City and follows the staff of Wayne Security. It is a dying division, which is exactly what Van Wayne wants. He is the cousin of Bruce Wayne and doesn’t want to be sidelined anymore. He wants to shift back to Gotham City and wants to have a part in the actual action of the Wayne business. But as long as this company exists, he can’t have that. What is this company anyway? Well, Wayne Security is for the regular people, the one without any superpowers who fall victim to the epic fights between the heroes and the villains. Every time Batman or Superman save the world, the common man has to pay the price. Wayne Security helps them alleviate this problem. Courtesy of Van, it is the most unhappening place now because he doesn’t want it to grow.

His plan works smoothly until Emily Locke is appointed the Director of R&D. She is an optimistic soul and a hard-working girl who is saddened by the current state of her department. She decides to stir things up, especially because they are there to help people and what can be better than that. Her revolutionary ideas and measures cause the employees to get back the enthusiasm that had led them to join the company in the first place. While this means a great thing for everyone, Van is not ready to accept this. Because the better the company fares, the sparser his chances get of going back to Gotham.

Emily soon realises the true intentions of Van and vows to save the company from him. But he is not the only threat that looms over them. Charm City is increasingly attracting danger from all sides and soon becomes the hub of all supervillain activities, which makes Wayne Security’s presence in the city even more important.

Powerless Season 2 Release Date: When will it premiere?

‘Powerless’ season 1 premiered on February 2, 2017. Despite a good start with the pilot, the show failed to garner enough audience with the consecutive episodes. The rating saw a nosedive one week after another, which showed that the audience wasn’t taking any interest in it. The critics too didn’t find it so loveable, the criticism particularly developed towards the slack comedy and weak writing. The cast, especially Hudgens, was praised for bringing some charm and depth to the show. Just after nine episodes, it became clear to NBC that they couldn’t continue with it. It was pulled out of schedule even before the first season could finish its run.

On May 11, 2017, the series was officially cancelled with the remaining episodes available on TVNZ OnDemand. The chances of another season are very, very unlikely. At this point, ‘Powerless’ season 2 release date of 2021 or 2022 seems like a distant dream. Even if the story is picked up by another channel, they will probably start from scratch. In any case, if there is any further development, we will update this section.

Despite all the bad critique and the cancellation of the show, if you liked ‘Powerless’, do not be disheartened. It wasn’t for everybody. You cannot have a follow-up, but you can still relive the first season on NBC. Here is the trailer to remind you why you liked it in the first place.