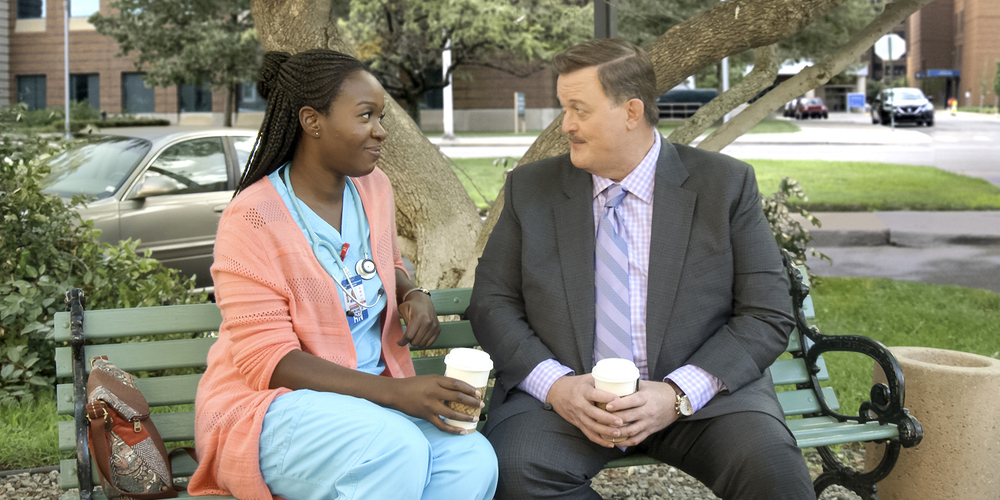 Bob spends most of Season 1 of ‘Bob Hearts Abishola’ trying to make the woman of his dreams fall in love with him. Now that he’s gotten the girl, obviously, the next step for old-school Bob is marriage. But when Abishola feels that marriage is not at all worth the effort of a traditional Nigerian ceremony, is Bob able to convince her otherwise? You can read all about season 2 episode 1 in the recap section at the end of this article. Before that, here’s a look at the preview of season 2 episode 2.

‘Bob Hearts Abishola’ season 2 episode 2 airs on November 23, 2020, at 8:30/7:30c on CBS. New episodes are dropped weekly on Mondays and each episode has a runtime of approximately 30 minutes.

The latest episodes of ‘Bob Hearts Abishola’ can be streamed for free on the official CBS website, 24 hours after the television premiere on cable TV. Viewers can buy or rent the latest episodes (or pre-order the entire season pass) on Amazon Prime, Vudu, Microsoft Store, and FandangoNOW. Season 2 of ‘Bob Hearts Abishola’ is also available to stream on FuboTV (new episodes become available a day after they air on television).

Season 2 Episode 2 of ‘Bob Hearts Abishola’ is titled ‘Paris Is for Lovers, Not Mothers’, and here is the official synopsis – “Kemi leans on Abishola after an argument with Chukwuemeka, disrupting her and Bob’s engagement celebration; Dottie gives Douglas a new job at MaxDot.”

‘Bob Hearts Abishola’ season 2 episode 1 is titled ‘On A Dead Guy’s Bench’. The episode sees Bob enlist Tunde’s help in picking out an engagement ring for Abishola. When he proposes, she refuses at first because she believes that marriage is just not worth the trouble of getting a divorce from her estranged husband and then having a traditional Nigerian ceremony. Bob returns the ring but then buys it again (at a discounted price, thanks to Tunde!) and is about to plead his case when Abishola changes her mind and says yes to his proposal. Now all that remains is for Abishola to get a divorce from her long-separated husband and for them to fly to Nigeria so that Bob can meet Abishola’s extended clan. Looking at their track record so far, things are never smooth-sailing for these two and there are bound to be hilarious road bumps along the way as they get ready for their impending nuptials.