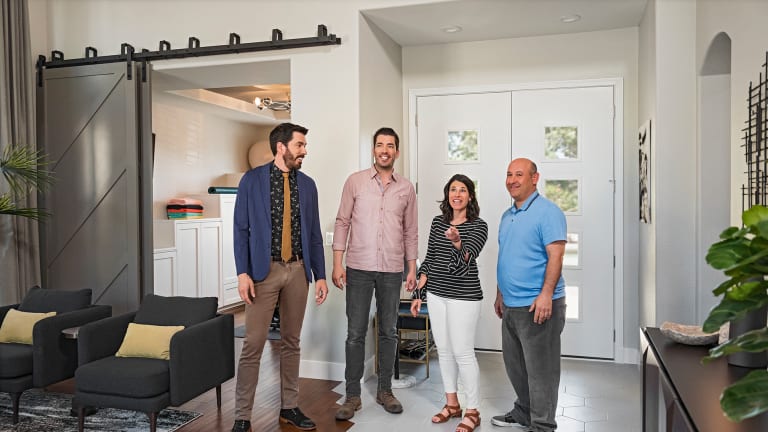 HGTV is a channel which has become the ruler of the real estate shows’ market. HGTV constantly keeps coming out with different house-hunting shows, which though are quite similar in content, have a particular quirk that sets them apart. While a show like ‘My Lottery Dream Home‘ centers around recent lottery winners looking for new houses, ‘Property Brothers: Forever Home‘, on the other hand mainly focuses on renovations more than looking for a new property altogether.

The show is actually a spin-off ‘Property Brothers’, where we got to meet the hosts Jonathan and Drew Scott for the first time. The Scotts are a veteran of this genre of reality TV, having earlier starred in shows like ‘Buying and Selling’, ‘Brother vs. Brother‘, and others.

Season 1 of the series is mainly centered in and around the Las Vegas area where the brothers visit certain homes and help the owners make the maximum use of their house and the space available by going for a complete renovation. The Scotts’ immense knowledge regarding home renovation is something truly admirable. They are a dynamic duo whose popularity is always on the rise. And unlike most other such shows where people are at times given the option to sell these places, this series is only for those people who are completely in love with their homes and do not wish to part with them whatsoever.

The Scott brothers welcome all types of houses on the show, and this makes us aware of their versatility when it comes to renovation. These houses can be six months old or sixty, they can be big or small, but once they’ve fallen in the hands of the Scotts and their crew, be sure they will surprise you with their overhauling.

‘Property Brothers: Forever Home’ highlights the importance of calling a place your own and renovating it in such a way that you are immensely proud of it. Season 1 of the series shows us many different types of houses in and around Las Vegas where the Scotts have weaved their magic.

Most of the people who approach the brothers are having space issues in their homes, sometimes because they are about to become parents, or at times because the layout is quite unimpressive. Drew and Johnathan often bring on the show people they personally know.

For example, in Season 1 Episode 6, the guests Brian and Meghan are the Scotts’ family friends who approach them to renovate their spacious Las Vegas house in a way that allows the entire family to sit down together in the living room. In another episode, we see Drew and Johnathan’s brother JD’s bachelor pad in a popular Las Vegas location, which he wants to transform into a proper house for a couple because of his impending marriage.

One main concern which has to be kept in mind while carrying out these renovations is the fact that after having lived in a house for a long period of time, it is only natural for one to develop an emotional bond with it. Therefore, completely changing the house in such a way that the owner himself/herself cannot relate to it is a factor that is one of the main priorities. We can see in the tenth episode of Season 1 where the brothers renovate for a family a house where they have been living for four generations now. They try their best to keep the house’s history alive while improving it for the better.

The Scotts brothers have hosted a number of home renovation shows over the years, and thus have now become experts in the field. Their constant efforts to make the lives of the shows’ guests bigger and better is something truly appreciable. In the episode with their brother JD, we get to hear stories about their lives, especially of the times when they were trying to establish themselves in the business and did not have any of the luxuries that they can now afford.