8 Best PTSD Movies of All Time

While PTSD is a very serious and life changing mental state, there’s no denying that with all the darkness and realism involved with this phenomenon, it’s an area that’s prone to cinematic exploration. World Cinema has not let go of this opportunity, as there have been more than several occasions where writers have decided to work around characters having PTSD. Certain films in the list may merely feature a character suffering from PTSD, some may be entirely based on the problem. There have been many masterpieces which involve characters suffering from PTSD. Through this article, I attempt to give you the best. So, here is the list of top movies about PTSD. If you are lucky you might be able find a couple of these best PTSD movies on Netflix. 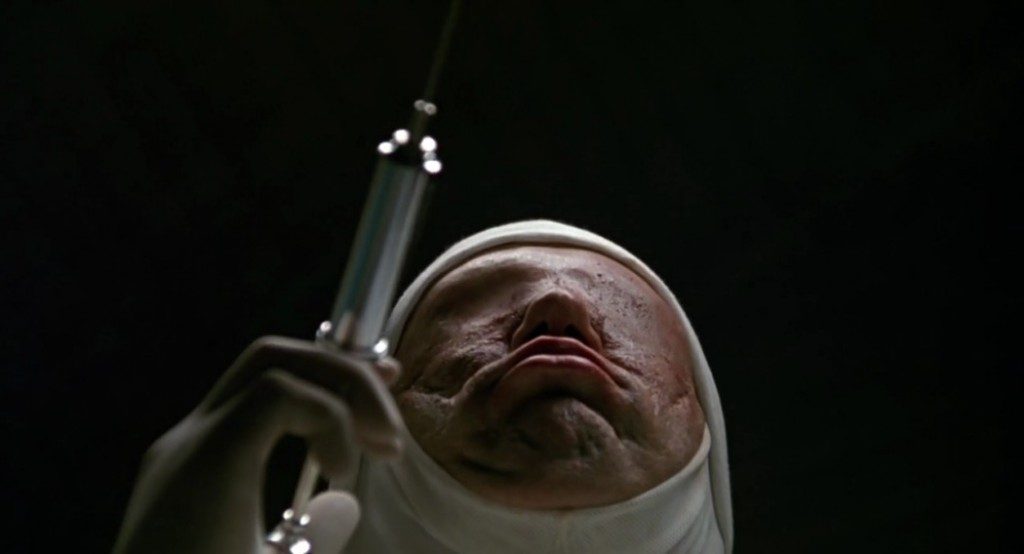 This film breaks many rules, purposefully confusing the viewer about the limits of reality and the truths in the film. It is difficult to describe, but far more difficult to forget. Haunting and frightening, you’ll be thinking about it for weeks afterwards, sorting out the realities. Bruce Joel Rubin’s script once had the distinction of being one of Hollywood’s best screenplays, which haven’t been produced, an opinion trumpeted in the pages of Premiere magazine.

Adrian Lyne finally put Rubin’s script on the screen. The script was also revealed to be one of the most convoluted, one that doesn’t seem sure whether it wants to question the government’s use of its soldiers for experiments with a dangerous hallucinatory drug, near-death experiences, or the gradual acceptance of death. ‘Jacob’s Ladder’ deals with all of these subjects, but in such a way as to guarantee that the viewer can interpret the film in almost any way, and on any level, he wants. The result is a complex, fascinating film with an extraordinary cast. 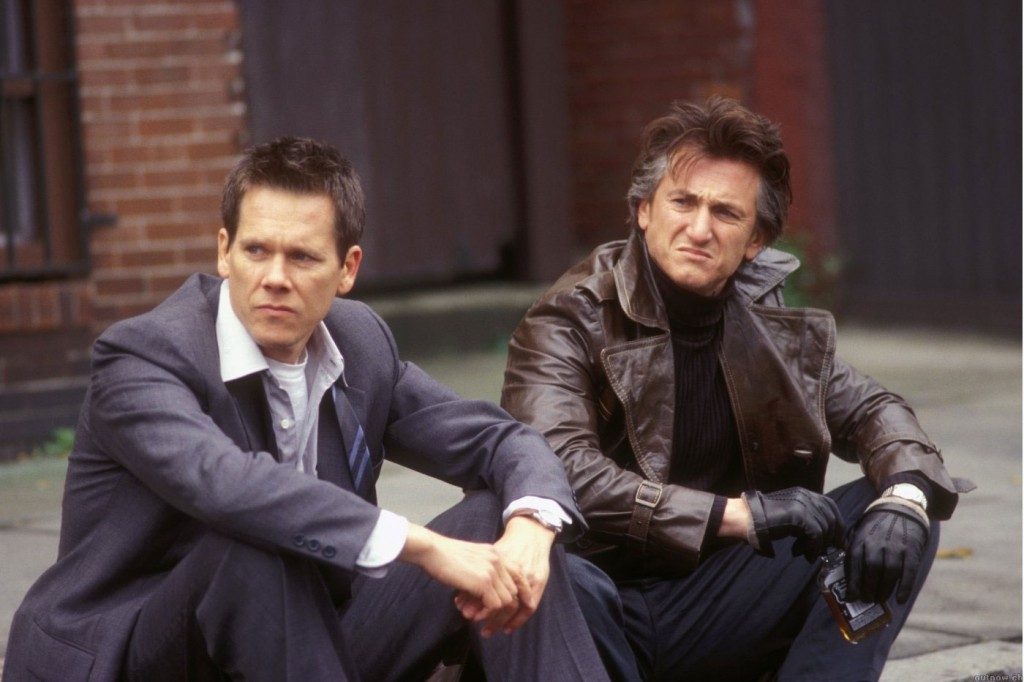 What makes ‘Mystic River’ a tremendous achievement in regard to directing and acting is how well the characters are presented within their universe. I’m fascinated by the Irish-Americans in Boston where the movie takes place. They seem to be living on a planet of their own. A planet where moral dilemmas and crimes are justified through religion, Machiavellian workings of power and simple conservative leanings towards roman-catholic ideals. Brian Helgeland’s script does a fine job by being the cornerstone for Eastwood’s directing. Yet the writing itself isn’t what make’s this movie so good. Almost the entire strength of the story is being brought forth through Eastwood’s meticulous direction. 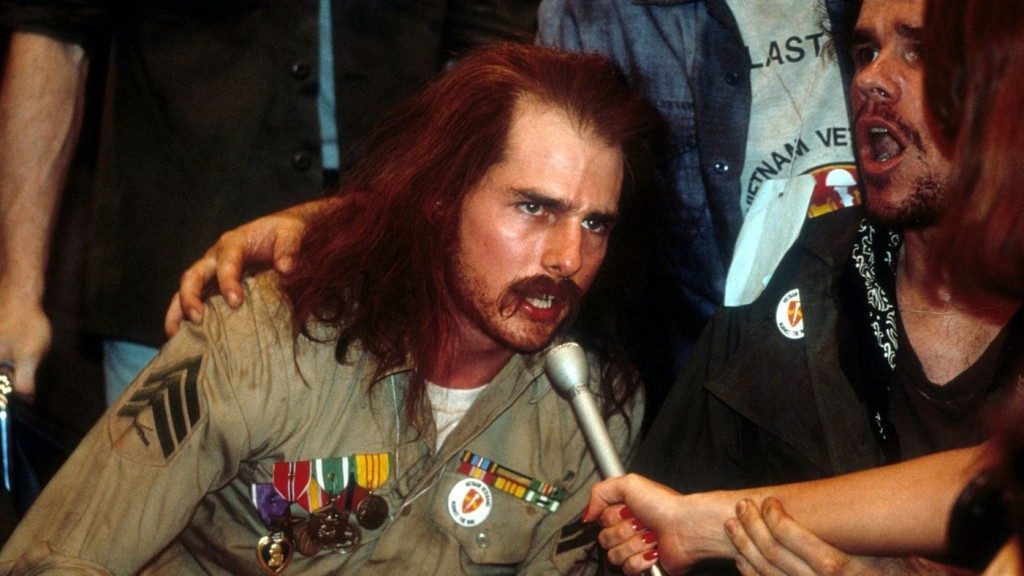 Born on the fourth of July is, to use a cliche, a Powerhouse film: a film full of weight, from Cruise’s knockout performance, Stone’s bold script and Direction, Richardson’s classy photography to Williams pitch-perfect score. The film is based on the true-life experiences of Ron Kovic, and is scripted from his book by director Oliver Stone and Kovic himself. Tom Cruise plays the lead character whom we follow from fresh-faced youth, to front-line soldier in Vietnam, to hospitalized patient, right through to embittered wheelchair bound protester. ‘Born on the 4th of July’ revolves around Kovic to such a degree that any flaws in the characterization would be fatal. It is some achievement that Cruise more than pulls off the part and, despite the straggly stuck-on mustache, never fails to convince. Supporting performances are universally good, without the story or script requiring them to particularly stand out. 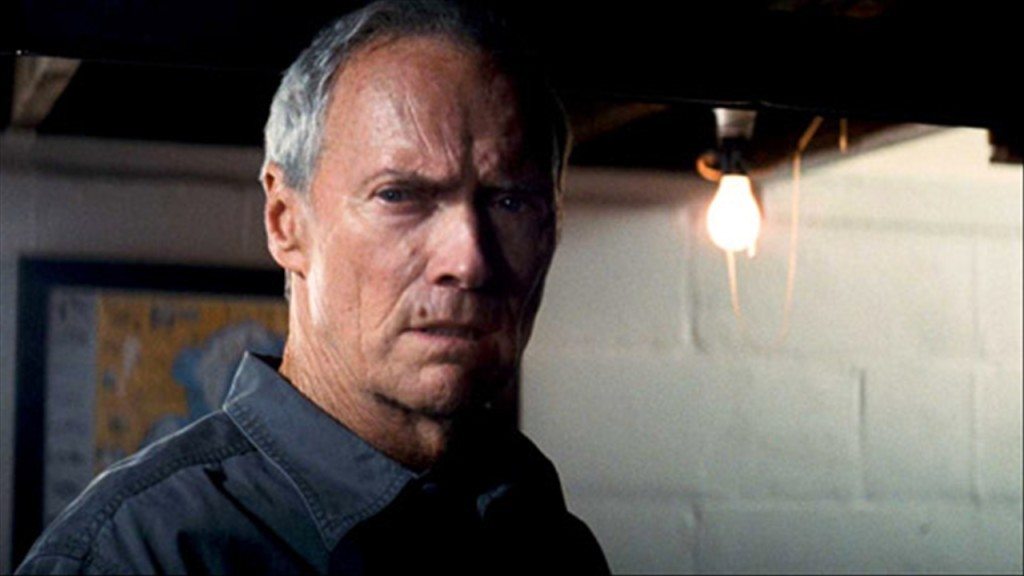 It’s amazing to see how this man can be both behind and in front of the camera and with his no-nonsense style, is able to direct a story that touches both our hearts and our minds and put together a performance that is a great achievement on his own regardless of the fact that the star is also in charge of the entire project. Whilst both electric and brilliant, Eastwood fully acts his character to the bone and it shows that this is a character that has been perfectly created by Eastwood himself.

Every aspect is detailed and visually amazing. Eastwood also shows us his dramatic and comedic side. The direction by Eastwood is powerful and imaginative which flows as boldly as the story. The backdrop to the film is mystic and thrilling as you don’t now what’s going to happen next, and Eastwood crafts this brilliantly which keeps audiences on the edge. On a personal note, tears rolled out of my eyes as the end credits started rolling, please don’t judge me. 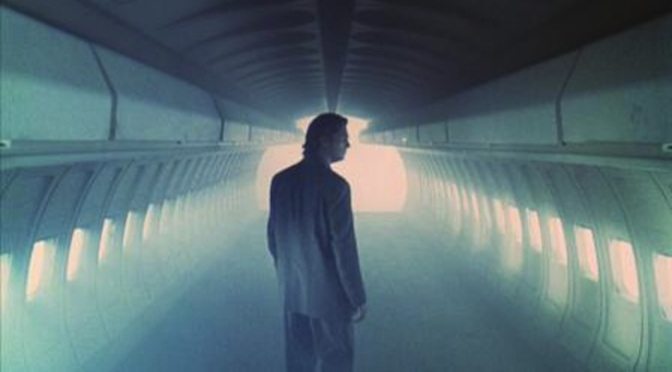 ‘Fearless’ is an extremely emotionally effective film, in large part because it steers clear of a lot of the clichés that one could imagine plaguing a movie about an airplane crash survivor. The film concentrates on drawing the audience inside the lead character’s head so that it can run the narrative through his perspective. His reaction to the crash is a complete lack of fear. Whenever he begins to fear the incident, he is compelled to do something almost suicidal to prove to himself that he can overcome the fear again. This is textbook portrayal of PTSD. The film sticks to the very basics, yet, provides in-depth look into the character’s problem.

The film is an adapted by Rafael Yglesias, from his novel of the same title and has lost none of its characters potency or varied interaction. In fact, it’s  a character study to be precise. The supporting cast all do well especially Isabella Rosellini who conveys the shock at effectively loosing and then struggling to regain her husband and Rosie Perez who shows herself torn to pieces by an old world Catholic guilt. 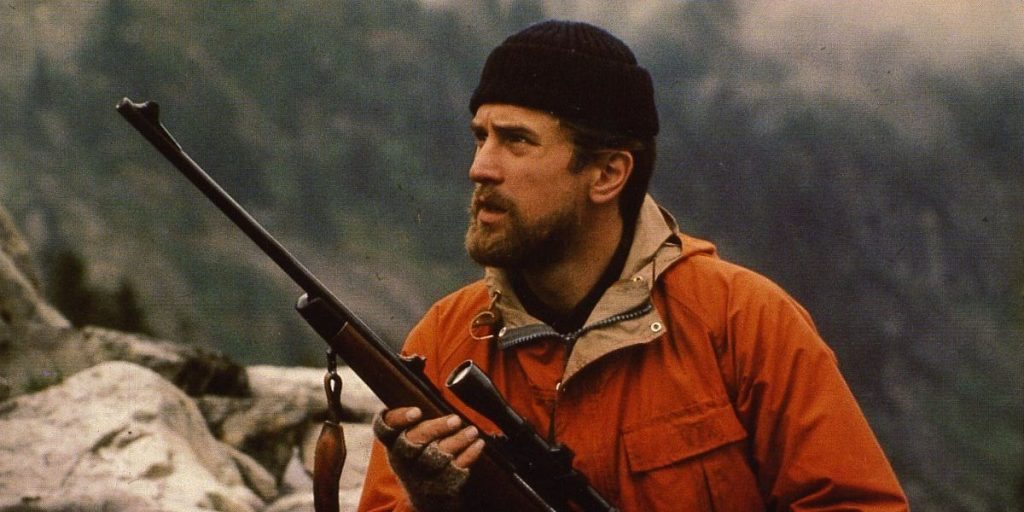 ‘The Deer Hunter’ ranks among the best films of the 1970’s, a long but not overly long saga of three Pennsylvania buddies whose lives are dramatically changed when they go off to fight in Vietnam. The whole Russian roulette scene in the Vietnamese prison camp is purely genius. Add to that, the relationship between the men is at no time forgotten during the movie and the scene where (spoilers) a character kills himself playing Russian roulette is probably the hardest psychological scene I’ve ever seen in a movie.

Robert De Niro, Christopher Walken and Meryl Streep lead a terrific movie supported by an excellent screenplay. This is the kind of movie that you want to see a multiple times no matter how hard psychologically it may be. The entire cast performs well, although, Christopher Walken gives a remarkable performance that etches his character into the viewer’s memory. 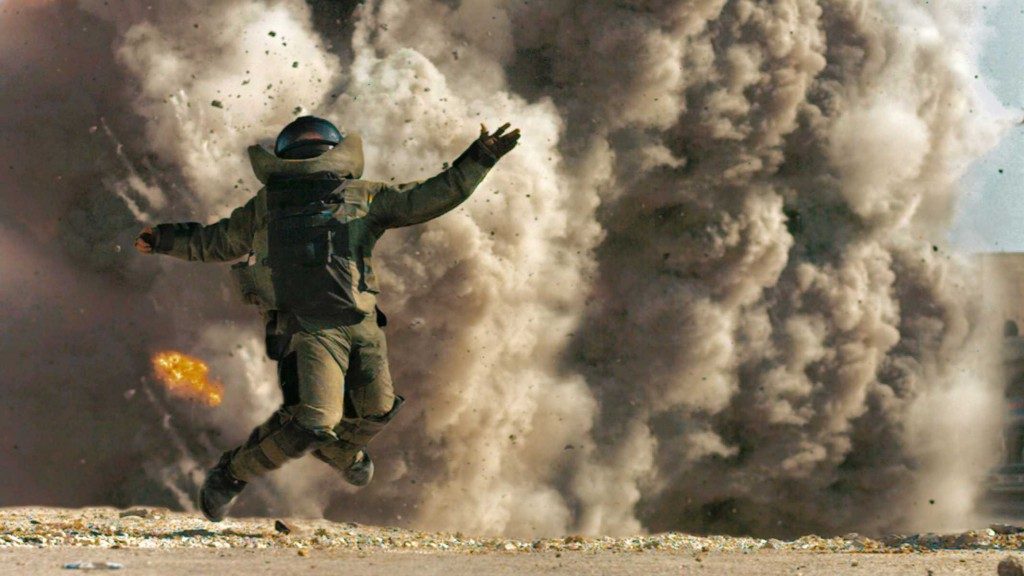 Arguably, the movie might not be better than a few movies in this list. But I’ve placed ‘The Hurt Locker’ so high up the list because of the degree with which it deals with PTSD. Following a particular bomb squad currently serving in Iraq, the film shows the war and it’s effects on a number of different levels. From the ground-level troops, to the commanding officers, to the civilians who witness every intense stand-off on a daily basis, ‘The Hurt Locker’ puts the viewer on the front line. Where other war-related films revel in the action-orientated battle scenes, Bigelow deliberately drains all the excitement and popcorn approach from the scenes involving gun-play and bombings, making for a much more natural, realistic effect.

Performances are perfect. Jeremy Renner is excellent as Staff Sergeant James, who loves the rush of disarming bombs, even if it means putting his fellow soldiers at risk. Anthony Mackie is great as the level-headed Sanborn, while Brian Geraghty scores strongly as Eldridge, who admires both James and Sanborn, but can’t decide which side to take. 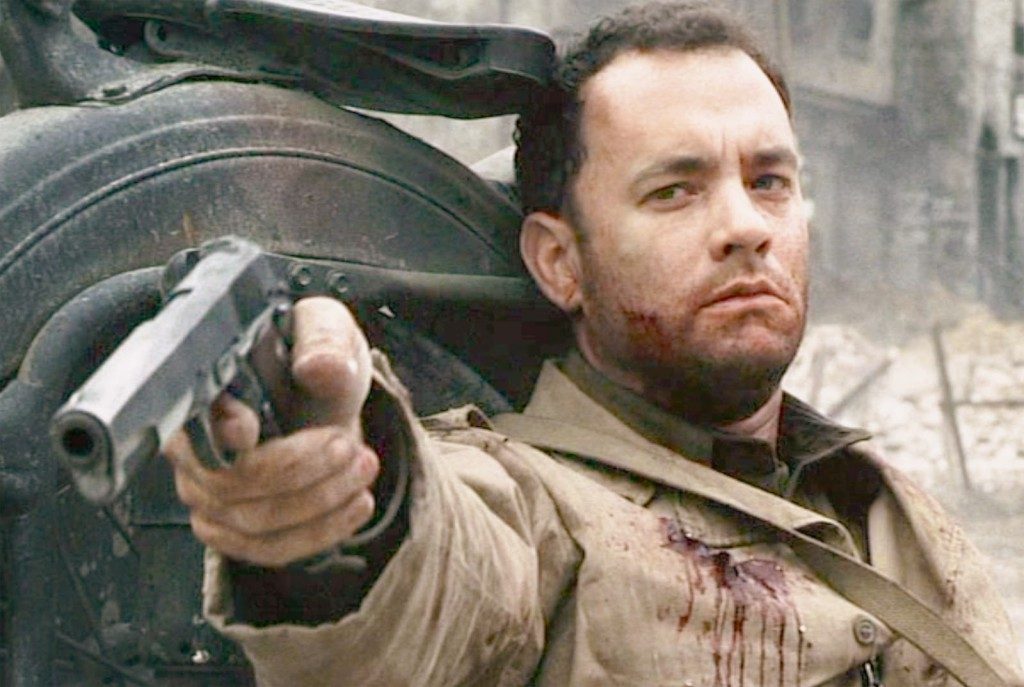 PTSD is just one of the issues ‘Saving Private Ryan’ deals with. Make a list about anything it deals with, the movie makes it to the top. Such is the sheer brilliance of the film. Steven Spielberg gives  us one of the best movies of all time. But more importantly, an entire generation that views World War II as ancient history, will finally be able to appreciate the sacrifice made by thousands of men and boys, whose willingness to die allows us to enjoy freedom. The graphic realism of combat that Spielberg portrays on-screen is necessary and will take your breath away. It will also make you proud.

Dialogue in this movie is succinct and to the point. Most of the characters exhibit their emotions merely by staring, emaciated, into the camera. Spielberg creates a graphic, candid image of war, something unparalleled.. To get the poignant purpose across, as well as many of the themes, Spielberg lets the audience identify with the characters, their fears and their insanity.