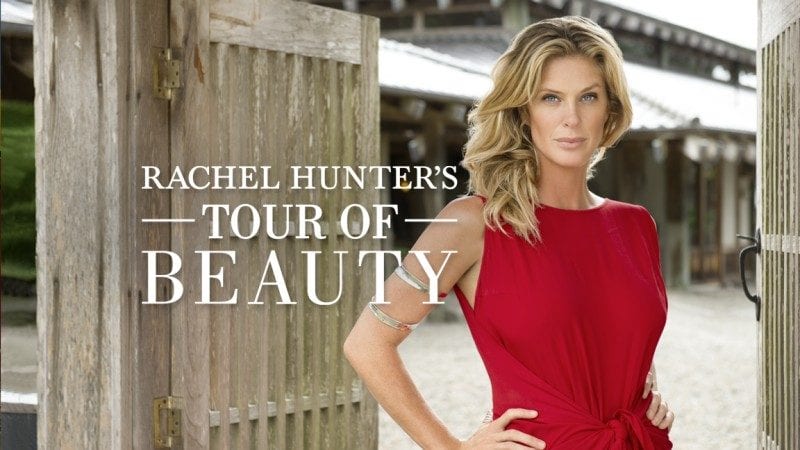 Rachel Hunter’s Tour of Beauty, that first premiered on Ovation TV on 26 August 2015, is a series presented by fashion supermodel Rachel Hunter who embarks on a journey to find hidden secrets of beauty, wellbeing and health. The show reflects an ever-changing worldwide movement towards a healthier and more natural lifestyle and how attitude with respect to beauty is evolving in different communities. Rachel Hunter’s Tour of Beauty is broadcasted in 150 countries over the globe.

Rachel Hunter’s Tour of Beauty Cast: Who is in it?

At the heart of the show is none other than Rachel Hunter, who takes viewers to different corners of the world in her search for lasting beauty secrets. She is a renowned New Zealander model who has featured on the covers of magazines such as Harper’s Bazaar, Vogue, Elle, Rolling Stones, Sports Illustrated to name a few. Born in Auckland, New Zealand, she has gone from a teenage model to a successful businesswoman, reality TV star, supermodel, to an actor. Rachel was in the spotlight for three decades and still is one of the most photographed models on the planet to feature on cover magazines and has been a famous face for hair products such as Pantene. Rachel when not shooting her TV series, continues to model for select clients, she is an ardent animal rights activist and lives in Los Angeles.

Rachel Hunter’s Tour of Beauty Plot: What is it about?

In season one of Rachel Hunter’s Tour of Beauty, the supermodel sets out on a long global journey to discover cultures. Her exploration begins from the Chinese Hainan to Greek Islands of Ikaria, where people live longer than anyone else on the planet. She goes from Asia to America, Mexico to the Middle East as well as Fiji to France, visiting some of the world’s most fabulous locations with one aim – to uncover hidden beauty secrets.

In Season two, Rachel continues her journey to the end to uncover secrets to ever-lasting beauty and things that bring a complete sense of well-being throughout America. From the ancient Incan of Peru to beaches of Miami, Florida in the US, from Rastafari Village in Jamaica to New York City, Rachel explores landscapes as varied and diverse as the people and cultures that inhabit it. With her beauty to present, Rachel shares the experience of her meeting individuals with ideas for astounding health and beauty secrets.

Rachel Hunter has travelled to 23 diverse destinations — including Fiji, Jamaica, Chinese Hainan Island, Morocco, India, Island of Ikaria in Greece, South Korea — meeting people from different walks of life who claim to hold the key to ultimate well-being and age-defying looks. From Rachel’s own blog, having her experiences penned down, we can certainly see what the previous episodes had and what people as viewers got to learn about beauty, well-being and health.

In Fiji, a south pacific proverb states, “He who plants a coconut tree, plants food and drinks, tools and ointment, a habitat for himself and heritage for his children.” Keeping this in mind, one can guess how important coconut for the people in Fiji is. They use coconut as their staple for everything including medication.

She visits Jamaica’s Rastafarian Village, home to the world’s best athletes and beautiful people. In this village, the majority of the beauty products and medicinal care come from nature, including make-up, skincare. Eating a vegan diet, the Rastafarians have discovered secrets to clean, natural and happy life. Meeting with beauty blogger, Natasha, we learn that natural look is coming back in a big way. After straightening her hair, Natasha has chosen to embrace natural hair by using Jamaica’s special Castor Oil to maintain her curls.

South Korea has the most shocking beauty standards of the world where cosmetic surgeries are common, and you can find clinics in every corner of the fashionable district of Gangnam. Korea, where a pageant winner who is 23, who still wants to look younger, wins an extensive cosmetic surgery and changes her appearance completely. And how Dr Hong just by consuming beans, fermented rice, anchovies and seaweed, ten times a month, has now been cancer free for 12 years.

Morocco has its secrets in its hamams (traditional steam bath with scrubs). Argan oil, rhassoul clay and rose water are among many of the natural products used by Moroccan woman to beautify their skin- as well as mint tea, which makes a surprising appearance as an anti-ageing tonic.

In India, Rachel searches for spiritual well-being. In Varanasi, on the banks of Ganges, Rachel learns there is an attitude to life hugely in contrast with the west’s chase for youth.

Ikaria islanders have the longest life expectancy just by brewing local wines and naturally grown fruits, people not wanting to use glasses to read even being a hundred years and surprisingly most have them have never been to a hospital. Their secret wine and steeply hills of the islands.

Residents of Hainan Island in China just by exercising and eating clean are leading an active and enjoyable old life. The most interesting part of the show is in Greece, where she met Georgios Karimalis, whose family has been living the true Ikarian lifestyle for over 500 years. Her Rastafarian village journey where she meets a local beautician who for years have been damaging her hair by straightening it and now has been naturally conditioning her curls with castor oil.

Rachel Hunter’s Tour of Beauty Season 3 Release Date: When will it premiere?

Tour of Beauty season 2 premiered on August 23, 2017. Season 3 has not been announced by Ovation TV yet but we are hoping that the show gets to see another season. If the show does get renewed, Tour of Beauty Season 3 can sometime in August, 2020.

You can watch the clip from the show below or visit the official website of Rachel Hunter’s Tour of Beauty or Ovation TV to watch the series.