Considered one of the most brilliant minds in the scientific community, Marie Curie’s life is an inspiring tale, with the right amount of incredible genius, heartfelt romance, and a scandalous affair. Prime Video’s ‘Radioactive’ tells her story, giving the audience an intimate look into her character, which defies all norms and constraints surrounding a female scientist, as well as her unparalleled dedication towards science. The ending gives closure to her story, while also giving the audience something to think about. If you haven’t seen the film yet, head over to Prime Video. SPOILERS AHEAD 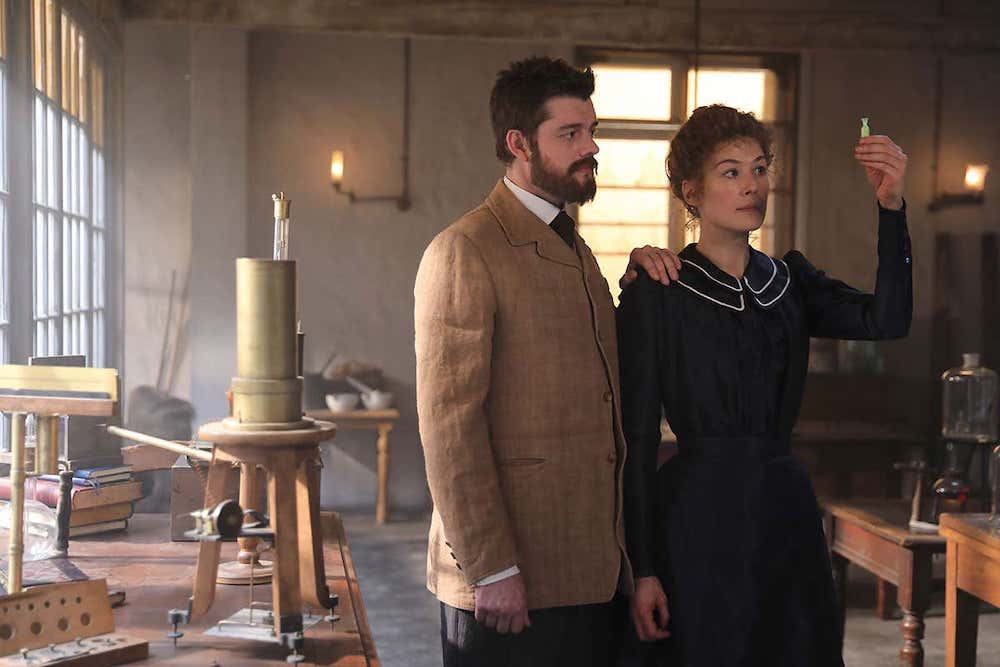 Marie Sklodowska struggles to secure a laboratory for her research after she is made to leave the lab of Professor Lippmann due to her demands to not move her equipment and allow her the space she needs for her experiments. All her efforts to secure some other place fail, until she crosses paths with Pierre Curie. He offers her some room in his lab despite its small size, and soon becomes interested in her research.

Their collaboration works wonderfully as they not only make serious strides towards a new discovery but also fall in love with each other. Soon enough, they get married and have two children- Irene and Eve. They discover radium and polonium, an accomplishment that gets them a Nobel. Unfortunately, soon after, Pierre dies in a road accident, and Marie’s life becomes all the more challenging.

Struggling with the loss of her husband, Marie finds comfort in Paul Langevin. They embark on a heated affair that stirs a lot of trouble for her. Paul’s wife employs a private detective to dig dirt on them and gets hold of their love letters. She sells them to a newspaper, which not only incites a scandal but also sways the public opinion against Marie.

With the rising nationalistic and anti-Semitic sentiments in the country, Marie is hounded by the public, who assemble outside her house and tell her to leave France, calling her a “dirty Pole” and a Jew, even though she is Catholic, and “a relapsed one at that.” Meanwhile, she continues her dedication to science and another Nobel is bestowed on her, this time in chemistry. Considering the uproar surrounding her, the committee asks her not to attend the ceremony. However, she flies to Stockholm and not only gives the speech required of her but is also received warmly by the community.

Marie’s relationship with Paul ends as he finds it best to keep a distance between them, claiming that he is doing this for Marie’s good and safety. But she knows he can’t get over the media scandal and moves on from him fairly well. The public resentment dies down eventually and the First World War threatens to tear apart the world. Irene, now all grown up, serves as a nurse in the war and implores her mother to do something for the soldiers who are amputated without a proper diagnosis of their wounds. After some hesitation, she dives into the work headfirst and finds herself ready to sell her Nobels, if that’s what it takes for the government to provide her with the equipment she needs to save lives.

Along with her work in the war, Irene collaborates with Frederic Joliot in the research of artificial radioactivity, furthering her parents’ work. Despite Marie’s initial refusal to let her daughter walk into the same kind of life that she went through, Irene eventually married Frederic.

In the end, the story circles back to the first scene where Marie was taken to the hospital after she fell unconscious in the lab. All these years of working amidst the radiation take its toll on her and she succumbs to her illness. She sees the repercussions of her scientific research in a young boy being treated with a linear electron accelerator, but she also sees the people who died in the bombings of Hiroshima and Nagasaki. She sees the people affected by the disaster of Chernobyl, as well as Pierre, who was also affected by radiation, which people claim was the real cause of his death.

Eventually, she reunites with her husband, who convinces her that she has no control over the ripples that are generated due to her actions. She should not hold herself responsible for the ways her science is interpreted and received in the future. They have given the world what it needed, and it is not up to them how it chooses to use this knowledge. He wishes for things to turn out for the good, she hopes he is right and departs the mortal world, with him by her side.