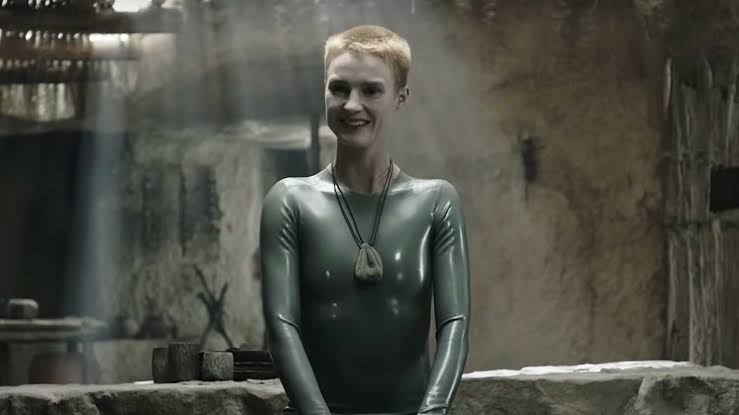 A fair warning to those who believe ‘Raised by Wolves’ to be a supernatural thriller: unlike what its title insinuates, ‘Raised by Wolves’ doesn’t venture anywhere near ‘Teen Wolf‘ or ‘Big Wolf on Campus’ territory. ‘Raised by Wolves’ is a science-fiction series produced by the genre’s reigning king, Ridley Scott, along with Aaron Guzikowski, Mark Huffman, David Zucker, Adam Kolbrenner and Jordan Sheehan.

The ‘wolves’ here refers to highly evolved androids who call themselves ‘Mother’ (Amanda Collin) and ‘Father (Abubakar Salim)’. The androids arrive on the remote planet, Kepler 22-b, carrying precious cargo, twelve human embryos. Their spaceship is distinctly unlike cinematic renditions, coming close in form only to the obelisk from ‘2001: Space Odyssey’. As the spacecraft lands, it tethers at the edge of a bottomless pit, before plunging right in. Mother and Father make it out just in time.

The planet in ‘Raised by Wolves’ is a desolate, post-apocalyptic hellhole that seems barren to the core. The weather deals in extremes and fluctuates by day and night; the days are sweltering and the nights are icy-cold. Still intent on their mission, the androids set up shop and initiate the first step of their mission: to breed more of the human species. The androids in ‘Raised by Wolves’ are so evolved that Mother can, without being impregnated, create optimum conditions for the embryos to be nurtured. By the end of the third trimester, Mother and Father have five healthy infants. The youngest of the lot is nearly declared dead and used as nourishment for the other five, but Mother steps in. She nurses him back to health in the span of a minute. The androids name their last-born Campion, a homage to their own creator.

From the get-go, the androids attempt to inculcate in the children an atheistic belief system. Mother advocates to the children the pitfalls of a ‘belief in the imaginary’. We can presume, from Mother’s teachings, that the end of life on Earth was brought about by warring religious and atheistic factions. Mother explains to the children how the religious, part of a creed called the Mithraic, rejected several technological advancements, including parenting by androids, on account of their principles and beliefs. We later learn that the Mithraic emerged triumphant in their war and, eventually, left the crumbling planet Earth in their Ark to traverse the expanse of the galaxy.

When the children are older, tragedy strikes. One of the lot, Talla, ventures too close to the trench and accidentally falls to her death. The only ode to the show’s title comes at this point; Mother, overwhelmed by grief, lets out a chilling animalistic howl. But the tragedy doesn’t end here. As the rest of the five children grow old, they, one by one, begin to fall prey to a mysterious illness, leaving Campion the sole survivor.

Soon, in her anguish at losing all but one of her children, Mother begins to malfunction. The androids in ‘Raised by Wolves’ are decidedly humanesque not just in appearance, but also in disposition. Like any human would, Mother is deeply struck by the loss of five of her children. On her path to breakdown, she has instincts one can only call strikingly maternal, begins to dream vividly and displays manic and animalistic tendencies. Wary of Mother’s inevitable breakdown, Father sets out on his own to do damage control. He attempts to transmit signals to a nearby Ark, a spacecraft of the Mithraic, in the hope that they induct Campion into their creed, should Mother and Father both break down completely. When Mother discovers that Father has flouted the objectives of their mission, she takes on a new, terrifying form and ‘kills’ him.

After Father’s so-called death, Mother still has some firefighting left to perform. Having received the signals transmitted from Kepler 22-b, the Mithraic land near Campion and Mother’s dwelling. We learn that the Mithraic devotees worship an entity called ‘Sol’ and come clad in suits emblazoned with the image of a red sun. Upon learning about Mother and Campion’s belief system, the Mithraic are hostile and distrustful of them. They attempt to ‘shut down’ Mother and take Campion back to their spaceship, where they believe he belongs. What happens next will go down as one of the most cathartic scenes in modern television history. Mother shrieks into the distance, pulverizing the humans in a matter of seconds.

Next, she gains access to the Ark of the Mithraic by virtually morphing into a spitting image of one of their soldiers. Yet again, she emits a high-pitched shriek, not unlike that of an animal, that spontaneously combusts an entire spaceship’s worth of humans. She returns to Kepler 22-b a changed android and brings with her a band of children.

What happened to Mother?

What we presumed to be a breakdown was actually a metamorphosis of Mother into an entity far more evolved, both physically and mentally, than her former self. After her transformation, Mother appears to be more sentient and aware than ever before. The loss of her children and Father’s duplicity have evoked in her a new sense of self and brought out powers she never knew existed.

Who are the children Mother brings back?

Mother does as a mother would do. When coaxing Campion to leave Mother, one of the Mithraic mentions that Campion would find a sense of belonging and companionship with the human children back at their Ark. Mother realizes that, although said out of ulterior motive, what the Mithraic devotee said was true. After hers and Campion’s family is torn apart and destroyed, Mother gets to work on building them a new one.

The series premiere spawned more queries than it answered. We’re left deliberating on numerous burning questions: what was the mysterious illness that took the lives of four of Campion’s brothers and sisters? Who is Mother’s creator, whom Campion is named after? Are Campion and the children from the Ark all that’s left of humanity? We’ll likely only find our solace in the next episode of ‘Raised by Wolves’.