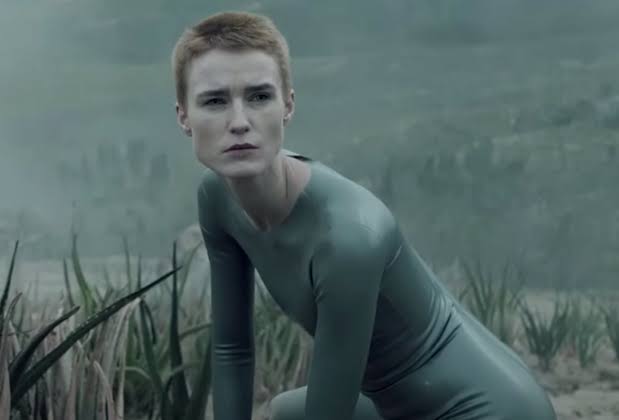 Raised by Wolves is, put simply, science fiction on steroids. The HBO Max series has already dealt us two hair-raising episodes and is back with another one.

Episode 3 of ‘Raised by Wolves’ takes place simultaneously in the past and present and shifts perspectives constantly. It begins with Mother forebodingly telling the tale of the Three Little Pigs. She does this with the purpose of alerting the children to the dangers that the creatures in the wild pose. But it only serves to achieve the opposite of her desired effect.

While the children are scared alright, it’s not the beasts in the wilderness that scare them. It’s Mother. Her Necromancer prowess not only has the newcomers running scared, but also Campion. The children begin to believe that she’s been using the creatures as boogeymen to trick them into submission, all while being the real boogeyman herself. They swap theories about Mother being complicit in the tragic deaths of Campion’s siblings. It doesn’t help that all children, save for Campion, begin to show signs of the same illness that killed the previous batch of kids or, as Mother likes to call them, Gen. 1.

Mother herself begins to question her abilities and wonders if she’s the unknown cause she’s been looking for all along. Still, Mother doesn’t give up. She travels to the land the Ark crashed into, believing that she’ll find medicine to cure the kids’ mysterious illness. What she doesn’t know is that she’ll come across much more than medicine: survivors.

Meanwhile, at the other end of the planet, Caleb is reunited with Mary and other survivors of the Ark crash. They begin to search for more survivors and cater to the needs of the injured. Caleb also attempts to coax the rest of the survivors to embark on a rescue mission for their missing children, believing them to be in grave danger. He also stresses on the irony of a Necromancer, a droid reprogrammed to be a killing machine, caring for and nurturing their children. This also broaches a discussion of how exactly this came to be, since the Mithraics were the only ones capable of reprogramming her (bear this in mind for later).

But Caleb’s concern for Paul is genuine. Despite not being blood relations of Paul, he and Mary had begun to care for him like their own. Through flashbacks, we learn that Caleb and Mary got up to a lot while in ‘sim’, a virtual reality simulation to keep the Ark members’ occupied as they remain immobile while their spacecraft traverses outer space. They began to bond with Paul, who was oft-neglected by his real parents, and ended up developing a genuine fondness for him and his affable nature.

Paul, too, is eager to escape from the settlement and reunite with his parents, wherever they may be. He and the rest of the children hatch a plan to outsmart Father and breakout of their so-called prison. They stage a diversion in the form of Paul losing his precious pet and succeed in locking Father within the confines of a hut. They, then, make their hurried escape. But there’s a lot they fail to account for, one of them being that their parents were right all along.

When going through adolescence, children often imbue a spirit of rebellion. But rebelling smack dab in the middle of an inter-planetary catastrophe with deathly creatures roaming the landscape is not the coming-of-age tale its chalked up to be. With worsening symptoms and beasts on the prowl, the children find themselves in a fix.

On the other hand, Father, ever the efficient caregiver, has figured his way out of the trap, all while making a startling discovery. He has realized that the pits they’ve been feeding the children are radioactive and the actual cause of the mysterious illness that keeps befalling them. Mother, meanwhile, has flown into what one can only describe as a Necromancer rage. After telling Mother about the cause of their endless days of worry, Father sets out to find the children.

Caleb, too, has convinced the Mithraics to send out a search party, shrewdly using the tenets of their own faith. Father catches up to the children before the Mithraics get the chance to. He does so not a moment too soon, just as a creature is about to feast on Campion. But the group is a child short, since Paul has wandered off in search of his lost mouse, for real this time. The episode culminates in Paul ominously falling down one of the pits of horrors.

How did Mother become a necromancer?

After keeping us in the pitch-black dark for two episodes, ‘Raised by Wolves’ finally hints at a big revelation. Given the fact that Mary and Caleb are the ones masquerading as so-called believers, they were capable of reprogramming Mother to be a Necromancer, as a means of getting back at the zealots.