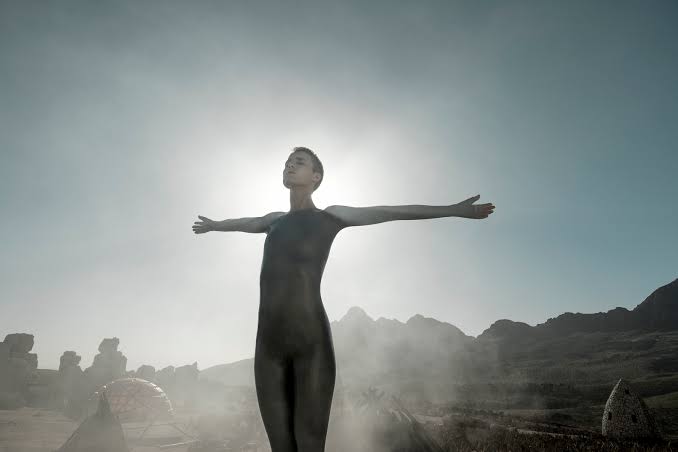 ‘Raised by Wolves’ is a scintillating new HBO Max series that tests the very limits of the imagination. The show draws its title from the myth of Romulus and Remus, who were raised by a she-wolf and went on to found the city of Rome. In ‘Raised by Wolves’, two androids, Mother and Father, travel to the planet Kepler 22-b to raise a band of human children as atheists.

At the end of episode 3, we see Paul fall down one of the seemingly endless pits on Kepler 22-b. Mother arrives in the nick of time to rescue Paul and reunite him with the rest of the children. We learn that Mother’s superhuman abilities are not limited solely to destroying people and creatures with her eyes; she can also lull them to sleep. Mother uses this prowess to put the children to sleep and then goes about an important task: removing tracking devices implanted in the children by the Mithraic and tossing them away. Seeing as the Mithraic were closing in on the settlement, this was done not a moment too soon. Mother then embarks on a new mission: to fix the broken incubation system for the pregnant Tempest, who is hesitant about having the baby herself.

As Mother prowls around the wreckage of the Ark to find apparatus to repair the incubator, she comes across the ‘sim’, a virtual reality simulation for the Ark’s inhabitants to escape into while in stasis. Mother hooks herself up to the sim and sees a simulation (that actually transpired) of a younger Campion and his siblings.

While Mother tinkers with the sim, Father is up to something just as important: feeding the children. In episode 3, we discovered that the pits being fed to the children were radioactive and the cause of their debilitating illnesses. After trying, and failing, to identify any form of consumable vegetation, Father decides to take a different route: killing and eating the creature he had previously captured. To teach them to fend for themselves, Father attempts to involve the children in the process of killing and dismembering the creature but to no avail. Campion ensures that he and the rest of the children have no part to play in the massacring and eating of an animal. Father is left stumped. Then, Tempest steps in. Tempest, driven by pregnancy hunger pangs, seeks out the creature and kills it herself for food. She discovers, to her horror, that the creature was herself pregnant.

Meanwhile, the Mithraic are facing trials of their own. Marcus is becoming increasingly insubordinate to ranking Mithraic member, Ambrose. When the group stumbles upon a large pentagonal stone that emits heat and was clearly created by intelligent life, this serves to create even more of a divide between Ambrose and Marcus. Ambrose treats this as a sign from Sol, the deity they worship, and decides to veer off track their search for the missing children and find a way inside the massive stone, to Marcus and Sue’s chagrin. Ambrose, who already harbors suspicion about the closet atheists, uses the delay to his advantage and attempts to unravel the pair’s real identities and motives. Ambrose then foists the android Varlac on the atheists with the intention of killing them, but the pair end up besting Varlac.

There’s another hurdle coming the Mithraic’s way: the heat-emitting stone soon fails them, right in the middle of an icy-cold night. Ambrose commands the Mithraic to blow up the Pentagon, so as to comfortably take cover inside it. The rest of the Mithraic are shocked that their leader would willingly demolish what appeared to them a temple, of sorts, of their deity. Marcus uses this, to his benefit, as proof that Ambrose is not a true believer of their creed. Then, something even stranger happens. The pentagon lights up in red. Mysterious voices begin speaking to Marcus. Marcus and Ambrose go head to head in a scuffle and Ambrose is thrown into the red glow. Ambrose burns to his death as the Mithraic watch on in terror.

Marcus is not the sole person (or android) on Kepler 22-b to hear and see things of a strange nature. On the settlement, Father spots a strange, child-like ghostly figure. The same figure had also appeared to Paul in a previous episode. The figure disappears before Father has the chance to discern whether what he saw was real or make-believe.

What happened to Marcus?

Whether Marcus underwent a divine experience or was simply hallucinating from stress and exhaustion is still unclear. But, clearly, Ambrose’s death was a long time coming. Marcus is now free to assume charge of the group and take on a leadership role. The group of Mithraic believers will, no doubt, see the altercation between Marcus and Ambrose as a test of their faith, one which Marcus passed with flying colors and Ambrose failed.

Who is the child that appears to Father?

The ghost-like figure bears a remarkable likeness to Tally, the child who wandered off from the settlement and into one of the deep pits that dot Kepler 22-b’s landscape. Since the androids assumed that Tally would not survive the fall, they presumed her dead, even though her body was yet to be found. Whether the ghostly apparition is truly Tally or her spirit (or someone else entirely!), remains to be seen in the upcoming episodes.