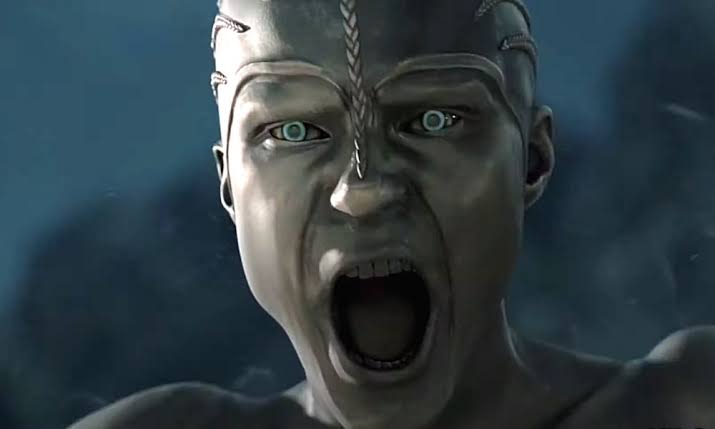 ‘Raised by Wolves’ is 2020’s only redemption. The new HBO Max series may call itself sci-fi, but, in actuality, is something of a genre-bending masterpiece. In the series, two androids are tasked with raising a family of humans on the planet Kepler 22-b, after human life on earth is destroyed. Episode 5 of ‘Raised by Wolves’, entitled ‘Infected Memory’, continues its trend of delivering accomplishment after accomplishment.

‘Infected Memory’ finally decodes the biggest mystery plaguing ‘Raised by Wolves.’ That of Mother’s creation. When mother sights a shadowy figure resembling Tally, she wastes no time in following it to the wreckage of the Ark. While she loses the child, she finds something else: her long-forgotten memory. When she hooks herself up to the ‘sim’ in the Ark, she is transported to the time she met her creator.

In the midst of a raging battle between the Mithraic and the atheists, Mother (then, simply Necromancer) is plucked out of the sky by an enigmatic figure and taken away. Her kidnapper is her creator, Campion. Through the visions, we discover that Campion was born a member of the Mithraic, but rebelled against his inherited beliefs to become an atheist. We also discover that as Campion reprograms Mother into the android she now is, he and Mother eventually come to love and cherish each other.

To Campion, Mother is his ‘proudest creation.’ Mother, too, forms such a bond with her creator that Campion fears she may not recover once they went their separate ways. He archives her memories to spare her grief when she undertakes a mission light-years away from him. Mother’s bittersweet memories are suddenly interrupted by an urgent message from Campion – how he manages to deliver the message is a mystery – that one of the children is in need of immediate attention. When Mother rushes back, she discovers that Tempest has consumed something poisonous and saves her life by helping her throw up.

At the other end of the planet, Marcus has been chosen the leader of the Mithraic, after their previous ranking member’s horrifying death. Under his leadership, the Mithraic continue their quest for the missing children. What they find, however, is far from their wildest imagination. We learn that the rapist who impregnated Tempest aboard the Ark has survived the crash. We also learn of the torture devices the Mithraic uses against miscreants. The rapist can be seen wearing a helmet, of sorts. Accompanying him is an android, who plays the role of a warden. If the rapist attempts to meddle with the contraption or the android, the helmet will crush down on his skull and kill him within a matter of minutes. The Mithraic also come across a mysterious figure – not Tally – who inadvertently ends up pointing them in the direction of the settlement.

Even as the Mithraic approach, the inhabitants of the settlement remain clueless. Mother and Father discuss the inception of ‘faith.’ Paul and Campion are busy leading by vegan example and convincing the other children to join them in their crusade against killing the creatures of Kepler 22-b.

Meanwhile, Marcus proceeds to have a chat with the rapist, who reveals to him a startling fact: miraculously, the ‘voice of Sol’ had spoken to him. The rapist claims that it was at the behest of Sol that he carried out his crimes. Unsurprisingly, Marcus is disturbed by the rapist’s claims. In fact, later, when Marcus and Sue have sex, Marcus has a vision of himself brutally killing his wife while wearing the dreaded torture device (more on this later). The next day, the Mithraic successfully make their way to the settlement and, as the episode ends, keep a close watch on the androids and children.

What should we make of Paul and Campion’s fast friendship?

Towards the end of episode 5, we see the unmistakable camaraderie between Paul and Campion. By now, the makers of ‘Raised by Wolves’ have established that the series does not feature feel-good moments for sake of feeling good. There may be more to Paul and Campion’s friendship that meets the eye.

‘Raised by Wolves’ derives its title from ancient Roman mythology. Romulus and Remus were twin brothers raised by a she-wolf. According to the myth, together, they became founding members of Roman civilization. In the image of Romulus and Remus, Paul and Campion, too, could go on to found the tenets of civilization on Kepler 22-b.

Moreover, the so-called Pentagonal Prophecy of the Mithraic religion claims that an orphan boy will become a prophet of the religion and found civilization in the Promised Land. While Campion has long-since been singled out as an ‘orphan boy’, unbeknownst to most, Paul, too, is an orphan. Whether Paul and Campion will found ‘Rome’ on Kepler 22-b, we’ll only know in the upcoming episodes.

Is Marcus becoming a Mithraic believer?

The Mithraic priest who raped Tempest alleged that Sol spoke to him and compelled him to commit the crimes he did. While this sounds like the ramblings of a man who uses religion to absolve himself of his sins, Marcus, too, begins hearing an uncanny voice and experiencing strange, gory visions. Not unlike the rapist, Marcus hallucinates that he commits a heinous crime – the killing of his wife, Sue, in cold blood. In the hallucination, he wears the torture device of the Mithraic as commits the crime. To put it mildly, Marcus’ beliefs (or lack thereof) are shaken when he hears of the rapist’s alleged divine providence. Marcus’ role as ranking member of the Mithraic, with a cohort of believers who look to him as an example of the faithful, has also, undoubtedly taken a toll on him. Whatever the eventuality, Marcus’ true test of ‘faith’ has come.

An interesting coincidence, which may not be a coincidence at all, is that Mother, too, begins to experience hallucinations while within the ‘sim’. Whether the same entity is causing these hallucinations in, both, Mother and Marcus, is left to interpretation.

What is the symbolism behind the torture device?

The Mithraic worship an entity they refer to as Sol. Given that Sol is commonly known as the Roman God of sun and that the Mithraic have an image of a red sun emblazoned on their suits, we can assume that the entity they so worship is the sun. The penance given to the priest is then easily interpretable. The Mithraic look to light as a form of blessing and a manifestation of their God himself. From this, we can assume that they consider darkness to be a curse and a form of punishment. The torture device, a bucket that blinds the priest, shrouding the world in darkness, is, thus, a fitting punishment.

An interesting theory that may or may not take root is that the bucket would serve as an effective way of incapacitating Mother, given that she derives her primary source of power from her eyes. She would be rendered more or less helpless when put through the same form of punishment. Whether this comes to fruition, we’ll only know later.