Where to Stream Raised by Wolves? 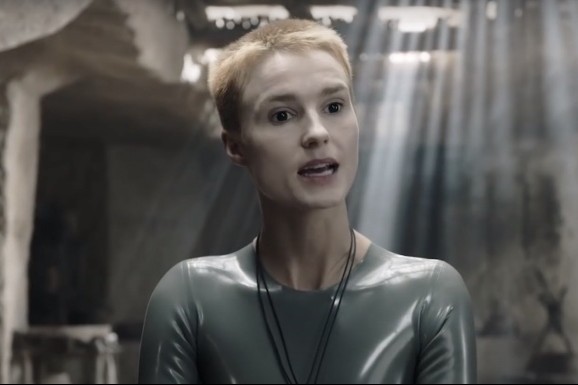 ‘Raised by Wolves‘ is an exciting science-fiction drama that envisions a futuristic society where androids and humans attempt to co-exist. The former soon finds that controlling the latter is not easy, and might even turn out to be treacherous. On the crossroads of such a perilous situation, we come across a colony of children raised by two Androids. Understandably, the series seeks to make a commentary about free will and the imposition of control. If you’re curious about where to watch ‘Raised by Wolves,’ we have got you covered. But, first, let us tell you a little more about the tale.

What is Raised by Wolves About?

‘Raised by Wolves’ sees two androids – Father and Mother – raising a group of children on an alien planet. However, the growing colony of humans soon threaten to tear themselves apart due to religious and other differences. Much to the horror of the androids, they realize that controlling the human will is treacherous and nearly impossible.

Is Raised by Wolves on Netflix?

Netflix is the preferred streaming service among several viewers because the platform maintains a stellar roster of films and shows. Its science-fiction content is also rather laudable. While ‘Raised by Wolves’ is not on Netflix, you can check out ‘Lost in Space.’ The story follows the Robinson family, who crash-lands on an alien planet. They band together, trying to survive, and come up with an exit strategy. What the Robinsons don’t realize is that they are surrounded by danger on all sides.

Is Raised by Wolves on Hulu?

Hulu has the edge over other platforms only because it has a dynamic roster of films and shows. Despite having a limited viewer base, Hulu ensures the audiences are always satiated. You won’t be able to stream ‘Raised by Wolves’ on the site, as is, but subscribers can add HBO to the existing plans. It allows access to all their content, including the series. Check it out here.

Is Raised by Wolves on Amazon Prime?

Amazon Prime sources content from all around the world to satisfy the viewers. Undoubtedly, it puts the platform among the top streaming sites that people prefer. While ‘Raised by Wolves’ is not available for Prime subscribers as is, you can always add HBO to the pack to access all the network’s content, including the show. Check it out here.

Where to Watch Raised by Wolves Online?

‘Raised by Wolves’ is an HBO Max series, so you don’t need to have Prime or Hulu subscriptions to watch it. Just head to the HBO Max platform. If you have a subscription to the platform, you can stream the series.

Where to Stream Raised by Wolves For Free?

The best way to watch ‘Raised by Wolves’ for free would be to use the trial period offered by HBO Max. If you already have a Hulu or Prime subscription, you can avail of the trial period provided by HBO and add the network to your existing plan. However, we’d like to urge readers to pay for all the art they consume.