Ralph Macchio is always sure of what he wants from life. As his character Daniel LaRusso says in the recently released trailer of the upcoming series ‘Cobra Kai,’ ”Balance, is my thing.” When he was 16, Macchio had to choose between a beach party and an audition one day. Without a second thought, he sent an actor aspirant friend as Ralph Macchio to the audition while the real Macchio went straight to the beach party. Born in Huntington, Long Island, New York, in 1961, Macchio started his dance lessons at the age of 3. When he was performing on the stage at the age of 16, Macchio was discovered by an agent. He started attending the audition with the help of the agent, but never took his acting career on a serious note.

The half-hearted actor landed the lead role for the TV series ‘Eight is Enough.’ Macchio’s intense portrayal of the character Jeremy Andretti catapulted him as an instant heartthrob. The immense popularity and fan following among teenagers helped him to secure a major role in Francis Ford Coppola’s 1983 movie, ‘The Outsiders.’ Macchio played the character of Johnny Cade alongside Tom Cruise, Patrick Swayze, Rob Lowe, Emilio Estevez, and Matt Dillon. In 1984, Macchio got his big break in the role of Daniel LaRusso in ‘The Karate Kid.’ The character became his most popular role till date and triggered his rise to stardom in the mid-80s. But his boyish charm and innocent face cramped his gradual growth into a matured star. He struggled to find challenging roles and ended with box office flops in a row.

With his acting career sliding down, Ralph Macchio turned into theatre and made his off-Broadway debut in ‘Cuba and His Teddy Bear’ with Robert De Niro in 1986. The success of the show led to his next off-Broadway show, ‘Only Kidding’ in 1989. Soon, Macchio landed in Broadway. History repeated when he tasted a mammoth success in the 1992 movie with ‘My Cousin Vinny,’ alongside Marisa Tomei and Joe Pesci. Despite the huge success, Macchio once again lost the opportunity to use the blockbuster as his launching pad. But he held on to acting with small TV appearances.

Macchio’s third big break came when he competed on the 12th season of ABC’s dance competition show, ‘Dancing with the Stars,’ and finished fourth. Soon, projects including ‘American Gypsies,’ a National Geographic documentary, ‘He’s Way More Famous Than You’ and ‘Hitchcock,’ an Alfred Hitchcock biopic, followed. At last, his 1984 cult action classic turned to the actor’s rescue. The movie revived as a YouTube Premium series in the name ‘Cobra Kai,’ with Macchio reprising his iconic role. At this point, the question that might be circling your mind is what is the next Ralph Macchio movie or TV show? Well, the good news is that we have a clear answer to that question. Here’s the list of upcoming Ralph Macchio films/TV shows scheduled to release in 2019 and 2020. We can only hope that the latest Ralph Macchio movies would be as good as some of his recent ones.

Macchio plays Officer Haddix, an exhausted cop fed up with the system. He deals with pimps, porn and hookers while sporting sideburns and smoking every time he shows up on screen. In September 2018, HBO renewed the series for a third and final season. James Franco plays the twin brothers while Maggie Gyllenhaal is cast as a prostitute-turned-filmmaker Eileen ‘Candy’ Merrell. Reports also suggest that season 3 is expected to time jump into the mid-’80s. Earlier, the second season saw a time jump from 1971 to 1977. Though no official date has been announced so far, the third season of ‘The Deuce,’ which is created by George Pelecanos and David Simon, is expected to air in 2019. 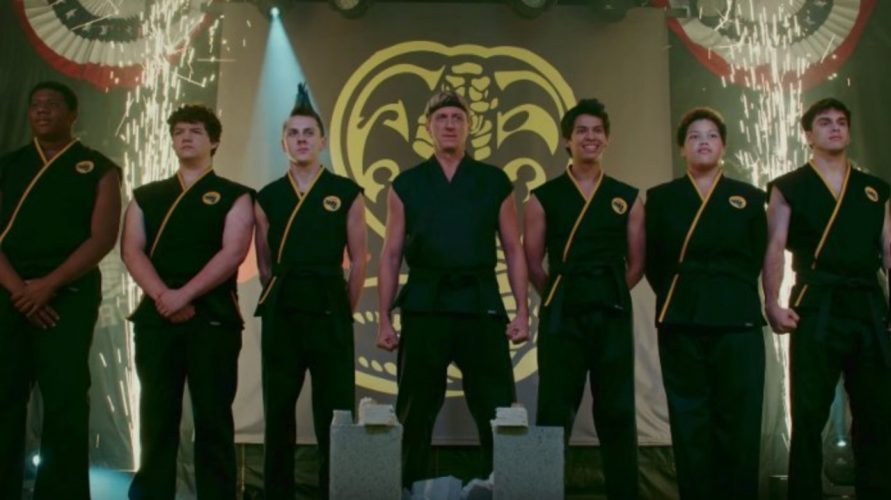 ‘Cobra Kai’ is one of the most unlikely series in TV history. The iconic show returned after almost 35 years to play two successful seasons on YouTube Premium. Actors Ralph Macchio and William Zabka, who played the arch-rivals in the 1984 flick ‘The Karate Kid,’ returns for a final showdown with the series ‘Cobra Kai.’ To the surprise of viewers and critics alike, the series went on to become a hit with 50 million views for the first season.

‘Cobra Kai‘ focuses on the titular rogue karate school and often rekindles the classic big-screen martial arts rivalry featured in ‘The Karate Kid’ between Daniel LaRusso, played by Ralph Macchio, and Johnny Lawrence, played by William Zabka. The YouTube series also introduces the second generation of students who are getting ready to test their martial arts skills in the All-Valley Championships grudge match. ‘Cobra Kai’ picks up three decades after the original movie’s climactic showdown. The series is written and executive produced by Josh Heald, Jon Hurwitz and Hayden Schlossberg. Heald, Hurwitz and Schlossberg direct the series. Season 2 premieres on April 24 on YouTube Premium.