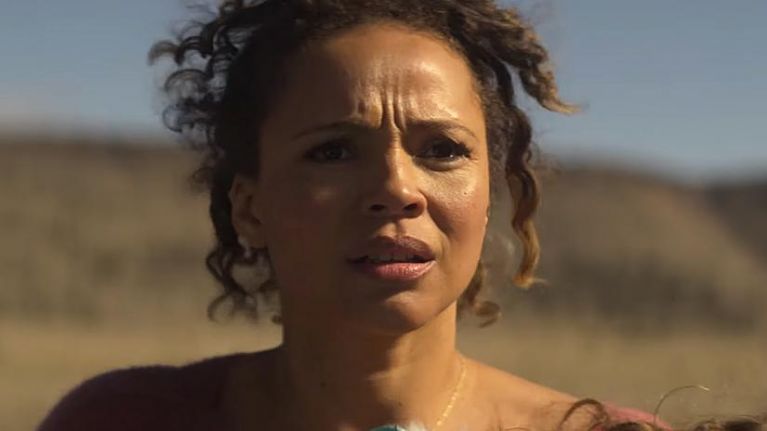 I truly, truly have to appreciate your resolve and commitment to viewing a film if you are here, having viewed Netflix’s latest horror offering this season, ‘Rattlesnake’. Despite everything that the film accomplishes, or does not, I will mostly agree that the film, specifically its final bits, do end up baffling you. And, given the desideratum of the human mind, naturally, answers are needed. Follow me as I attempt to explain to you while finding those answers for myself too, as to what actually happened in this bizarre film and what does its ending really mean. Read on.

The film opens with a single mother, Katrina Ridgeway, along with her daughter Clara Ridgeway, traversing the Texas desert on road. Things first begin getting awry when the two are diverted by the GPS on to a relatively isolated route owing to an accident ahead, traversing which she quickly loses network. The sound of her tires popping makes her pull up in the middle of nowhere, and while she fixes the tire, Clara wanders out not too far into the arid wasteland, where she is bitten by a venomous rattlesnake.

Katrina immediately looks to seeking help but to no avail in the godforsaken land, except for a trailer parked some distance away. She rushes there for help, and while initially it appears empty, a woman appears and offers to help her, ensuring her that Clara would be safe, briefly mentioning a “payment” that startles Katrina, who nonetheless proceeds to fix her car in order to be able to drive Clara to the nearest town hospital in Tulia. This is where the uncanny begins.

When she returns to take Clara, she finds Clara unconscious but okay, with her wound all but vanished, leaving no mark on her skin whatsoever, which is unnerving to her. She searches for the woman who is nowhere to be found, and being unable to locate her nearby, she escapes with Clara and takes her to the hospital.

Naturally, the doctors are a little apprehensive of Katrina’s condition since Clara displays no signs whatsoever of having recovered from a venomous snake bite, something that she firmly refuses. However, she is paid a visit by a stranger in the hospital, who tells her that she has until sundown to meet her end of the bargain she made unwittingly and near unknowingly with the woman: a soul for a soul. In simple words, in order to have her daughter live, she would have to kill somebody innocent: a deal with the devil, although the film never overtly mentions either of those terms.

There are unexplained visuals of the lawyer visitor vanishing with blood covering his shirt slowly, of a church priest teasing her while him and the church behind him go up in flames, and that of a missing child appearing to remind her of the extremely limited time she had, but apart from being marginally spooky, they don’t serve a bigger part of the narrative or where the plot heads in a major way. She investigates about unexplained murders in the town of Tulia and finds the lawyer to have been killed in a random act of violence, and the child to have been reported missing several months back, clearly implying that she wasn’t the only one to have made that deal with the devil.

After the mysterious visitor makes her see what Clara’s condition would be post sundown if she failed to meet her part of the deal, ensuring her that she would die, Katrina is convinced that she needs to kill somebody, and the rest of the film, safe to say, follows her tumultuous journey full of tough moral choices to the end into making that kill and saving her daughter. The film may not do a very good job at bringing those questions of an ambiguous morality up in a very succinct manner, but it is plenty clear that there is at least an indication of where it wanted to head, since this is everything that the plot comprises of post the rattlesnake and deal-with-the-devil bits have all but waned out.

The First Victim: Did She Kill The Old Man?

Katrina ascertains her first, guilt-free victim within the hospital, an aged sickly man, who, as indicated by her grieving daughter was on his deathbed. She befriends the daughter, and sneaks in a chance to kill him by stifling him under a pillow when his daughter isn’t there, but the scene inexplicably cuts at that moment, followed by a shot of her with the same pillow in the lavatory, presumably contemplating her actions, either already committed or to be committed.

Shortly after, his family step into the room to find him flatlining while a seemingly unaware Katrina emerges from the lavatory. There are two things that tell me the obvious didn’t happen, and while the first of the two, her surprised reaction at the old man’s death, just as everybody, could be manipulative, the more direct evidence here is that she continues her pursuit of claiming an innocent soul through the day before the sun set. She wouldn’t be doing that if she herself would have killed an old man on the verge of death as it was.

After escaping from the hospital, while she contemplates on her actions further, drinking away at a bar, she encounters a woman who has been recently physically abused, something that is almost immediately confirmed when her husband walks in and threatens her into leaving with him. I would like to believe this is when she decides that the abusive man, Billy, would be her victim, presumably since killing a domestic abuser would pry less on her conscience when she was out of this situation. I am yet to fully form my thoughts around that, but for now, that would seem like the only plausible explanation. If you have read my review of the film, you would already know that it’s quite the least of the film’s problems.

She begins her pursuit by staking out the couple’s place, their address by following them, and goes out to purchase a handgun in order to kill him. She is immediately denied since she doesn’t have a native Texas proof of residency, but the dealer directs her to Charlie, and tells her that he would be able to get her a firearm without question in exchange for a full cash payment.

After an unusually uncomfortable five minutes or so at Charlie’s place, she is able to acquire the gun, and she begins her plan to kill Billy by practicing shooting in the open, going on to invade the couple’s home while they are in the shower. Her resolve only grows stronger as she sees him continuing to physically abuse his hapless wife, and sneaks up behind them with her face concealed to take Billy hostage. She has him drive the both of them to the middle of the desert where she plans to kill him, but after Billy pleads for his life claiming that he was inherently a good man, she gets distracted, and Billy uses that window to struggle with her and escape.

With the sun nearly down and at the horizon, it becomes increasingly clear that Katrina would have to sacrifice her own life, offering her soul in return for her daughter’s to be spared. A mysterious hiker woman appears at that conjunction, making her realise her impending fate, who vanished just as suspiciously as the other ciphers that appeared in the film to warn her of the time at her hands and reminding her of what she had to do. This prompts Katrina to record a farewell message for Clara, which is when she is suddenly attacked by Billy who hasn’t escaped and is back for retribution. He knocks her unconscious, and while he points her gun at her to make her surrender, she tries to slit her own throat before the sun goes down to save her daughter, seeing which a baffled Billy attempts to retreat but is bitten by a rattlesnake and falls to the ground from a low cliff.

Seeing him alive and breathing his last, Katrina climbs down to him, and slits his throat with the plastic knife just moments before the sun sets, thus completing the sacrifice. If you have stuck so far, bear with me a little more as we proceed to the final bits of the film.

There is sufficient reason to believe that what Katrina did, sacrificing Billy’s life, did successfully save Clara’s life, since when the sun is down and she is walking through the desert, a number of the people confirmed to be dead throughout the film, most noticeable among them being the lawyer and the missing child, appear mysteriously, onlooking at her walking through. Even if there is no clear indication, the film does refer to some sort of metaphysical connection between the innocent people who were killed and whose souls sacrificed in return for some others to be spared, seemingly caught in some kind of realm in the afterlife doing the devil’s (or whichever supernatural entity was seemingly guiding this) bidding.

After setting Billy’s truck on fire and proceeding back the Hospital in her own car that she had presumably parked out earlier in the desert, she receives a call from the doctor at the hospital informing her that Clara was safe and ready to go home, reinstating her faith in what she did. However, upon returning to her, she is startled when she discovers Clara drawing the same mysterious shrouded woman that she saw in the newspaper reports of the lawyer’s death and others, albeit with the sun shining, heavily implying two things. She was the entity to whom the souls were owed, and the second, even the people who were spared their lives in exchange for those who were killed were somehow connected to this supernatural realm of the undead, or at least had visions of it. Unfortunately, the film doesn’t spend any more time on setting up the legend or delving deeper into any of these aspects.

The same is also confirmed when the two, safely driving back, notice an undead Billy calmly walking through the road, and while Clara too sees him and recognises him as a hitchhiker, Katrina now knows all too well that she too is tied with all of this somehow, ushering in or at least alluding to the biblical concept of a tainted soul that had sinned.

Apart from all this, there is also a slim possibility that it was actually Katrina who was bitten by the rattlesnake, and all that we see in the film is her hallucinating her way through it. However, there is feeble evidence to suggest any of that, so we are just going to leave it at that: an untethered figment of the imagination. I am still struggling to cohesively put together how a rattlesnake fits in here more than anything other than a conduit, but in the end, it is as Katrina says while recording her farewell message for Clara. “None of this is gonna make sense, since it doesn’t make any sense”.